Why Weaning My Baby Is Making Me Want To Cry 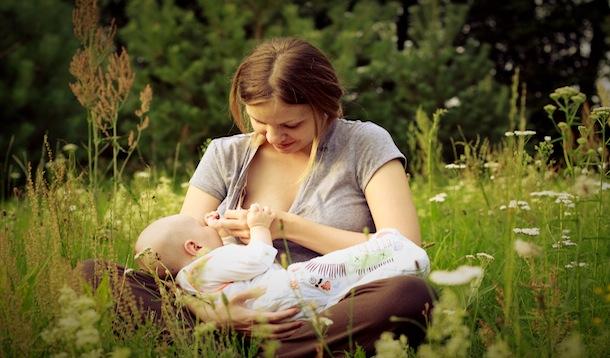 So, I’ve finally weaned my almost one-year-old off the boob. She's been a boob-lover since she was born. She was amazingly easy to breastfeed. In fact, the worst part of the breastfeeding experience was the lactation class in the hospital before I was discharged. I already knew what I was doing, but seemed to lack self-confidence after three years off the job. So, I went to the class assuming I’d need a refresher. I was so tired and emotional and the nurse leading the class was horrible (she shoved Fiona onto my boob and was like, “Do it just like this!” Huh?). So, I walked out of the class mid-way through, tears streaming down my face, my giant breastfeeding pillow and new baby tucked in my arms. I couldn’t get to my room and out of the hospital fast enough.

Other than one painful case of mastitis, I found breastfeeding really enjoyable. I ditched the annoying breast-cover early on, and found stealthy ways to nurse in public. I fed whenever and wherever she wanted it. It wasn’t an issue at all.

Because Fi would take bottles when I went out, I didn’t have to worry about not having any freedom. In fact, the ease with which she took a bottle made me really happy. Still, I enjoyed not having to clean bottles all that often. I found breastfeeding more convenient in the midst of a busy life with two kids. And I was more than happy to re-allocate all the money we didn’t spend on formula to other things, like toys, and clothes, and groceries. I also loved that whenever I forgot to bring a bottle or snack along, I’d have something to feed her, no matter what. (Again a symptom of being a busy, disorganized mommy!)

But since she’s almost one, I decided it was time to wean her. Still, I’ve found this decision to be a really difficult one. I wasn’t expecting to be so attached to breastfeeding.

I thought about weaning her at 6 months. That's when I weaned my eldest daughter, and she transitioned nicely to formula, giving me back my freedom. (I was working from home and needed to be able to leave her for meetings, etc., and until that point, she really gave me a hard time with bottles.)

I thought about weaning her at 8 months. She was waking up a lot in the night—too much for a baby her age and her size. She didn't need to eat, but she liked to eat. And the only way I could settle her (without letting her cry and risk waking up her big sis, who has always been a more unpredictable sleeper) was to shove my boob in her mouth and then transfer her back to her crib, “drunk” on milk and ready to sleep soundly.

I thought about it at 10 months. I was getting really skinny. I know, some would say, I shouldn’t complain about this. But I was actually starting to get worried. My doc wasn’t too happy with my weight, and gave me all kinds of info about calorie-rich foods I should be consuming. I started buying 9% yogurt, and putting full-fat milk in my coffee. I was eating tons of avocados and bananas—and ice cream almost every night. But I just wasn’t hungry all the time, and while I felt like I was eating a lot, it didn’t seem to make a difference. At 5’7” I worried when the scale kept tilting toward the 120 mark. I didn’t want to be so skinny—my skinny jeans were starting to sag. But, I wasn’t sure how to keep ponds on. My doctor assured me it was my eating that had to change—nothing else was going on—and that breastfeeding was likely contributing to the weight loss. Baby was taking up all my extra calories.

But as I worried about my own weight, I also worried about all the nasty germs that seemed to be EVERYWHERE this winter. My big kid was bringing all kinds of daycare germs home, and I really didn’t want a sick baby. So, I kept breastfeeding—at the same time offering her more finger foods so she’d be less hungry for my milk.

My mom, who is hugely supportive and has always provided me with lots of worthwhile parenting advice, was advocating for me to wean. She nursed each of us for three months and then made the transition to formula. She kept saying, “You’ve given her a great start . . .” Although I totally value my mom’s opinion, I wasn’t sure I agreed. Something inside of me just wanted to go a little further with this. I wasn’t quite ready to stop.

But a few weeks ago, Fi started waking up EVERY day at 3am wanting to eat. Enough was enough. I had so much work on the go that I really couldn’t afford to be so sleep deprived. Finally, I decided I’d begin the process of weaning.  But I was still feeling a bit guilty. Especially when she’d point at my chest and make the sign for "more." Talk about a guilt trip . . . and she can’t even talk yet.

It only took a few days to get her sleeping through the night (way easier than I thought!), and in the mornings I offered her cow’s milk or one of those organic puree fruit/veggie pouches instead (PS: those things are the BEST invention ever!)

I was down to nursing her just before bed. But those feeds were taking longer and longer. It was as though she was trying to drink up as much milk as possible, since she was only getting it once a day. I started to feel impatient. Then I felt guilty for feeling impatient. I wanted the cuddles, but I was starting to feel like I was getting over the whole breastfeeding thing.

So, one night I stopped. Fi went to bed without nursing and I said, "Okay, we’re done."

But, my boobs paid the price.

Now it’s been a week and I’m still engorged. I'm waiting for my boobs to get the message that the milk bar has been closed.

I wake up soaked.

I keep crying for no reason.

Today Fi woke up with a fever, and I started to panic. Maybe I shouldn’t have weaned her yet? Cold season isn’t over. Is it too late? Should I just feed her a little bit? No one will know. Wait, what? This is totally my body and my decision. All that advice I’ve been getting . . . so not what this is about.

And, so, I shoved my boob into her mouth. She looked surprised and happy for a few minutes. She sucked away as if nothing had changed. And I drained a bit of the milk that had been accumulating for days.

But then her big sister walked into the room. Fi was distracted and pulled off. She had no interest in eating any more.

But first, I’m going to find some cabbage leaves to stick in my bra. Read this post to learn more about baby-led weaning. Or check out Jen's post on breastfeeding her toddler at 18 months.

Hailey Eisen: Our Happy Place Why You Should Rock N' Stroll For Mount Sinai Hospital

Hailey Eisen: Our Happy Place A Guide to Bottle Feeding Your Baby