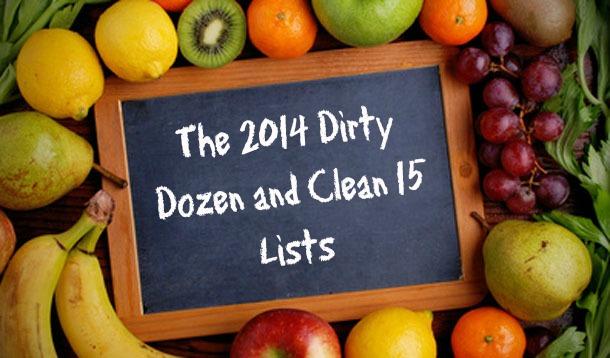 For the tenth year, the Environmental Working Group (EWG) has put together their Dirty Dozen™ and Clean 15™ lists to empower consumers so we have an idea of which fruits and vegetables contain the most pesticide residue. Pesticides are not only harmful to us, they are also harmful to the environment.

Of course, buying organic produce is an individual choice based on money, availablity, and beliefs. The lists are designed so you can have an idea of where to splurge and where you don't necessarily have to spend the extra money to buy organic—if eating organic is important to you.

*  The lists below are based on US produce, so they may not 100% reflect what is happening here in Canada, but since a lot of our produce is imported from the US, it’s a good idea to use the list as a guideline when purchasing imported fruits and vegetables.

The two following crops did not meet traditional Dirty Dozen™ criteria but were commonly contaminated with pesticides exceptionally toxic to the nervous system:

Get more info here on why these two crops are of special concern.

EWG's Clean Fifteen™ for 2014 are the produce items least likely to hold pesticide residue. Relatively few pesticides were detected on these foods, and tests found low total concentrations of pesticides.

The full list of all the tested produce can be found here. See where your family favourites rank. Also see this FAQ about the list on the EWG website.

Then, check out this video to learn why it's beneficial to reduce the amount of pesticides in your diet.

Check out the book "Toxin Toxout" to learn the effects harmful chemicals have on us and how to get them out of your body and read up on the EWG's Dirty Dozen List of Endocrine Disruptors.