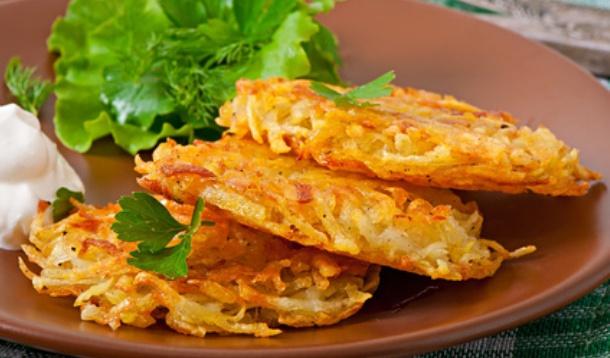 Hanukkah is right around the corner, and I have been cooking up lots of traditional holiday dishes. I thought, though, that I’d opt for a twist on the traditional latke. These hybrid sweet potato latkes topped with some super charged sour cream make for a great combo.

Take Your Latkes To The Next Level: Kick-Ass Crispy Quinoa Cakes

If cilantro’s not your thing, try mixing it up with another fresh herb you may prefer. 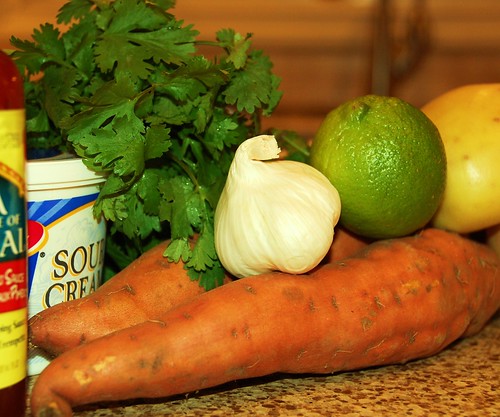 Grate the onion into a large bowl. Grate both potatoes into the same bowl, grating down the length of the potato to get long strands. Toss the potatoes with the onions as you work to keep them from discoloring.

Put potato mixture in a clean dish towel and wring out excess liquid. Toss the latke mixture with the flour, salt, and cayenne. Stir in the egg.

Heat a 1/4-inch oil in a large skillet over medium to medium-high heat. Working in batches, spoon about 1/4 cup of the latke mixture into the skillet, pressing lightly to form latkes. Take care not to overcrowd the pan. Cook, turning once, until just golden, about 2 minutes per side.

Serve the l atkes topped with a small dollop of Chili-Cilantro Sour Cream.

Combine all the ingredients except the cilantro in a medium bowl and whisk together. Stir in cilantro.