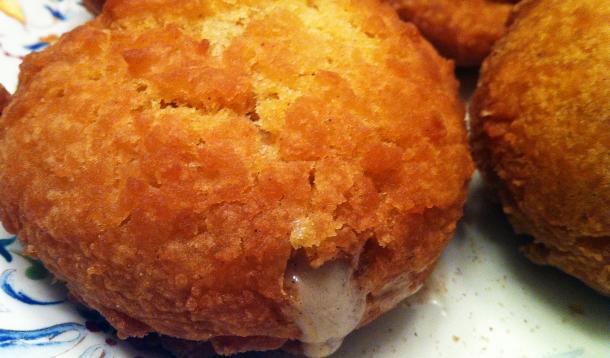 The Jewish holiday of Chanukah lasts 8 days and is all about frying delicious foods. A holiday I can definitely get behind! Jelly-filled donuts dusted in powdered sugar, known as sufganiot, are a typical treat served on Chanukah. Last year I merged two of our family favourites and made mini salted caramel sufganiot. This year I thought I'd try bringing some fall flavours into the mix and came up with these delicious pumpkin spice sufganiot and filled them with a cinnamon cream cheese icing. A little twist from the original holiday treat, but oh, so delicious!

In the bowl of a stand mixer, combine egg, 1/2 cup sugar, and brown sugar beating until combined and slightly foamy. Add buttermilk, melted butter, vanilla, and pumpkin puree. Stir until smooth. Slowly add flour mixture and stir until just incorporated. Turn dough out into plastic wrap and form into a ball. Refrigerate for at least two hours or as long as overnight.

Generously flour a large work surface. Turn out the dough and coat with flour, sprinkling the surface of the dough with flour to lessen stickiness. (Note the dough is EXTREMELY sticky). Gently pat the dough to about 1/2 an inch thick. Use a floured 3 inch ring (a child's cup works perfectly) to cut out doughnuts and place cut doughnuts on a well floured sheet of parchment paper. Collect any scraps and roll out dough to cut more doughnuts until all the dough is gone. Allow donuts to sit for up to an hour. Allowing the surface of the donut to dry will help them fry up without absorbing too much oil.

Fill deep fryer with oil. Heat oil to 360°F. Using a shallow, heat resistant strainer, drop doughnuts in the oil and fry until a deep golden brown on both sides (about 2 minutes per side). Use wooden chopsticks to turn the doughnuts. Be careful not to crowd the doughnuts in the pan (no more than 2 to 3 doughnuts at a time). Remove doughnuts, set on paper towel lined baking racks to cool.

In a bowl, beat together the cream cheese and butter until mixed, then beat in the sugar. Finally, add the vanilla and cinnamon. Once donuts have cooled slightly use a decorating filler tip or a plastic squeeze bottle to fill the donuts and top with a sprinkling of cinnamon sugar.
Category:
Food - Recipes
Tags:
chanukah recipe
sufganiot
pumpkin donuts
gav martell

Gav Martell: He’s in the Kitchen Skip The Cone: 8 Things You Can Make With Ice Cream