Daughters & Fathers: 10 Quotes To Tug At Your Heartstrings

Daughters & Fathers: 10 Quotes To Tug At Your Heartstrings 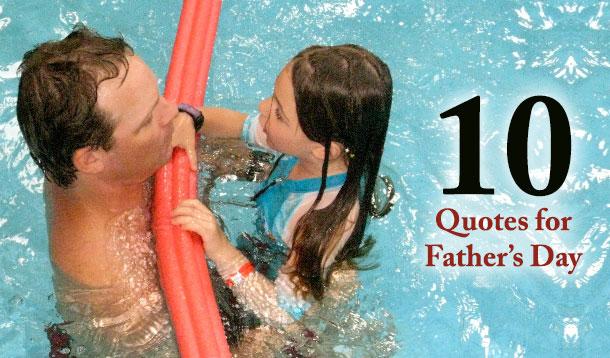 It goes without saying that father-daughter relationships are complex, very, very complex.

Literature teaches us it has been this way though out the ages. That's why it was so interesting for me to research and choose these quotations (from1937 on) written about fathers by daughters who were authors and journalists. While the role of the modern dad is shifting, some emotions associated with our 'daddies' will never, ever change. Reading these quotes written over time, I knew and felt today exactly what these women were talking about then. There is no escaping the fact that many will tug at your own heart strings and evoke your own memories of your own dads. Good memories, I hope!

Down in the bottom of my childhood my father stands laughing.
(Tove Ditlefson, Early Spring, 1985)
He was generous with his affection, given to great, awkward engulfing hugs, and I can remember so clearly the smell of his hugs, all-starched shirt, tobacco, Old Spice and Cutty Sark. Sometimes I think I've never been properly hugged since.
(Linda Ellerbee, Move On, 1991)
My dear father! When I remember him, it is always with his arms open wide to love and comfort me.
(Isobel Field, This Life I've Lived, 1937)
All the feeling which my father could not put into words was in his hand — any dog, child or horse would recognize the kindness in it.
(Freya Stark, Traveler's Prelude, 1950)
Whenever I try to recall that long-ago first day at school only one memory shines through: my father held my hand.
(Marcelene Cox, Ladies Home Journal, 1954)
My heart is happy, my mind is free. I had a father who talked to me.
(Hilda Bigelow, Dear Abby column, 1993)
The mature, forty-five-year-old woman, quite experienced in matters of life and death, knows that it was 'for the best," but Daddy's girl, who hung on to his belt and danced fox trots on the tops of his shoes, cannot accept that Daddy is not here anymore.
(Marie-Lou Weisman, Hers, 1986)
I wanted him to cherish and approve of me, not as he had when I was a child, but as the woman I was, who had her own mind and had made her own choices.
(Adrienne Rich, Split at the Root, 1986)
A father had to work only half as hard as any mother to be considered twice as good.
(Mary Kay Blakely, American Mom, 1994)
He opened the jar of pickles when no one else could. He was the only one in the house who wasn't afraid to go into the basement by himself. He cut himself shaving, but no one kissed it or got excited about it. It was understood when it rained, he got the car and brought it around to the door. When anyone was sick, he went out to get the prescription filled. He took lots of pictures...but was never in them.
(Erma Bombeck, Family — The Ties That Bind, 1987)
Category:
Family - Daddy
Tags:
fathers
fathers day
daughters
quotations
holiday
Evelyn Hannon