The Secret Life of a Santa Claus Parade Clown 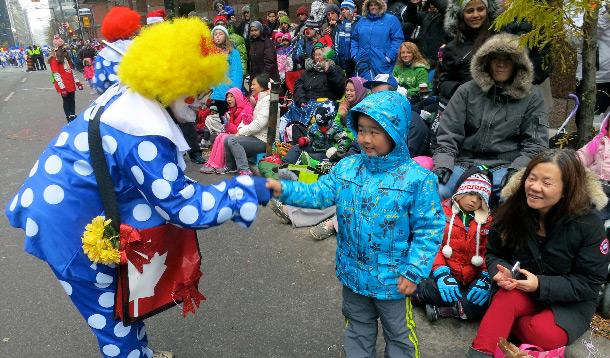 Clowns never ever scared me. Their antics always delighted me.
The overwhelming desire to be a clown in the Santa Claus Parade was born when I watched my first parade in Montreal in the Forties. I was ‘snowsuit’ young. It was so cold and I remember all the kids being bundled up within an inch of our lives but, oh the excitement!

The Proper Way To Dress Your Kids For Cold Weather So They'll Stay Outside Longer
Fast forward to a blog post I wrote when I was past retirement age. In it I mused about having accomplished many of my major life goals and now … ‘There's no longer a driving need for me to succeed. I simply hope to experience some offbeat stuff that I think will make my heart happy.’ And, the first item on that list was still, ‘I want to be a clown and lead a parade.’
Last week my daughter was invited to be a celebrity clown in the Santa Claus Parade. Bless her heart, knowing my crazy wish to be a clown she asked that I go in her place. Oh my goodness! What a wonderful opportunity. My heart lit up like a Christmas tree.

The Pros and Cons Of Real vs. Artificial Trees
However my inner voice promptly went into worry mode. ‘ Seventy-four year olds aren’t meant to be clowns. Act your age. You’ll need to walk three and a half miles. What if it’s bitter cold? And what if you need to pee along the way?’ Three hours is a very long time.'  With each new worry my family talked me down. If it's on your wish list, just do it, they counselled! 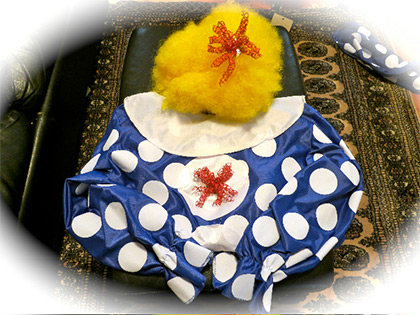 I listened and I must say I did approach the big day with great gusto. My blue clown costume with the white collar and yellow wig were hand delivered to me as soon as I sent my formal acceptance. And, from that moment the excitement mounted. I went off to the Dollar Store to buy some clown accessories. Yes! Those yellow daisies and a tiny blue whisk broom would be perfect.
My instruction sheet informed me that I must be at clown headquarters at 8:15 AM. Believe me, I needn’t have worried about being too old. There were another 100 clown wannabees of all sizes, shapes and ages already there. Many of them had been clowning in the parade for years. I was the newbie with loads of questions.
First we all had breakfast and I was instructed to go easy on the coffee. That should take care of the ‘what if I need to pee?’ concern. 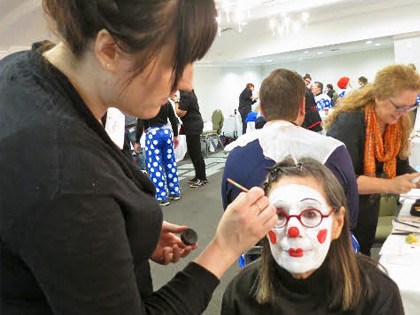 Signs posted on the wall led us all to the clown make-up room with artists waiting to paint our faces any way we wished. My gal, Meg was a dream. Together we decided on a simple design to show off my trademark red glasses. I then watched in the mirror as I morphed from Evelyn to clown extraordinaire (at least in my own eyes). 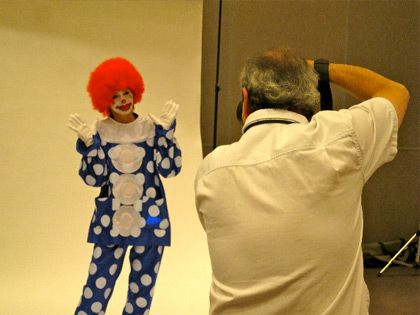 Next came a personal photo shoot for each clown. 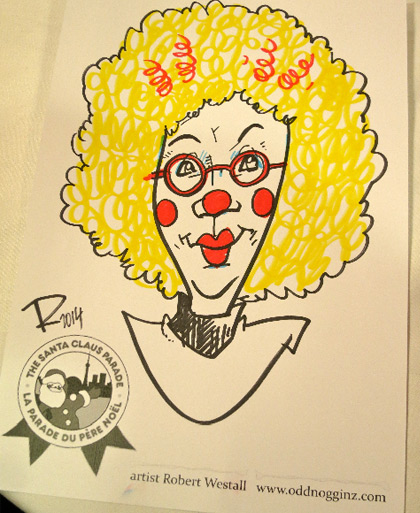 Followed by the clown caricatures 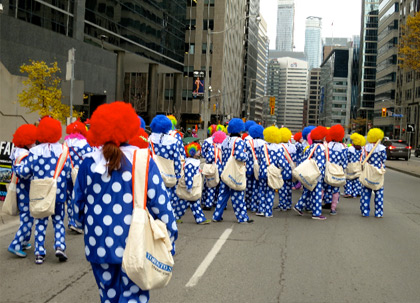 And then off we all went for our 2014 clown group photo. 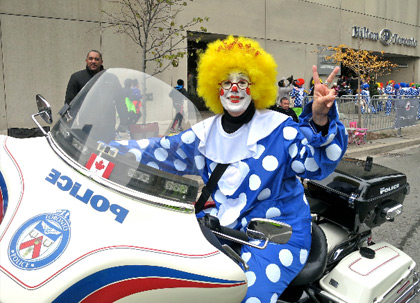 Naturally, I took the opportunity to chat with the motorcycle cops who were going to be in the parade. I couldn’t resist asking if I could use a motorcycle for a photo opportunity. 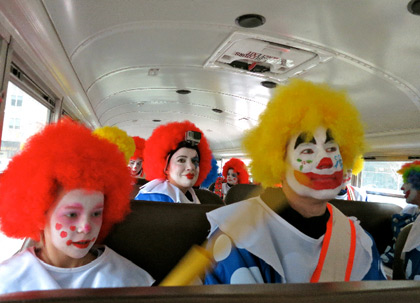 It wasn’t until we were in the school buses being driven to the start of the parade that it happened. I began to feel a huge emotional lump in my throat and the tears began to well in my eyes. 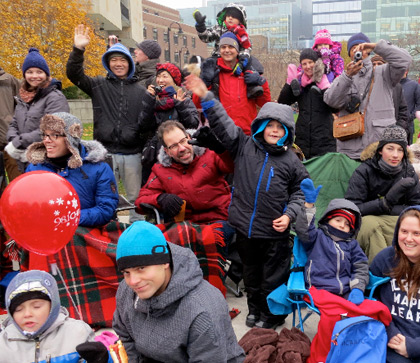 There were already kids lining the parade route and they were waving madly at us. My mind flashed back to that little kid bundled up in a  snowsuit a long, long time ago. I remembered the joy I felt then. Today, hopefully would be my opportunity to pay it forward. I so wanted to pass that delight along to another generation of Canadian children. 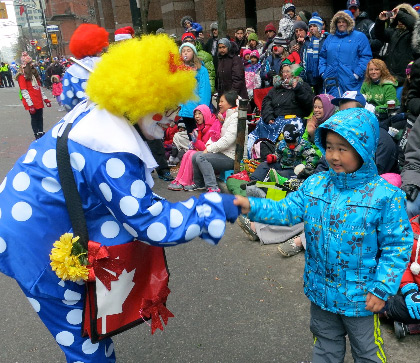 While the younger clowns skipped, danced, and made lots of noise with horns and whistles, I quietly concentrated on the very young children in the crowd. I touched their little hands, blew kisses and often got the sweetest smiles of delight in return. I asked the five and six year olds if they were married yet, and if not, why not? That brought out the guffaws, exactly as intended.

One man held a sleeping baby and asked me to pose with the child. He said that 'one day we'll be able to show him his first Santa Claus Parade.'  Children ran up to me with letters to Santa. I promised to deliver all of them. I was fulfilling their dreams. They were fulfilling mine.

Santa Has Gone Digital: Online Ways To Connect With St. Nick
Of course, I couldn't let this opportunity go by without exercising the inner mischievous me as well. Every so often I stopped in front of the crowd and emphatically pointed to an adult to stand on a designated spot beside me. I got a lot of ... Who, me? They were, of course, leery but they eventually came forward. Lots of laughter ensued when I gave each a big hug and wished them a Merry Christmas (and yes, there were a few handsome men involved in the exercise).I carried my tiny blue whisk broom in my red bag and used that to dust the falling snow off the uniforms of police personnel who lined the route. The kids loved it and the very nice officers politely indulged me. 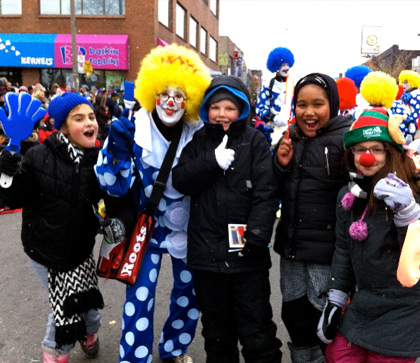 Too soon it was over. The clown wig came off, costume put away, and my face washed clean of any ‘clowning around.’ But rest assured that those kids who lined the parade route gave me enough happy memories to last a lifetime. I can only hope I did the same ‘juicy stuff’ for each and every one of them. 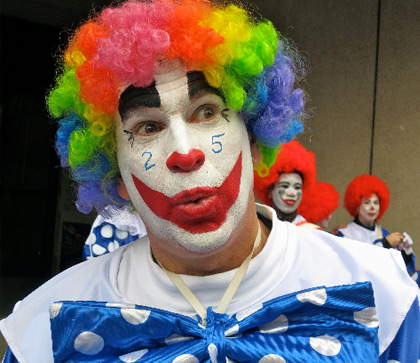 P.S. This blog post is dedicated to Jeff Weiss, President of Harbinger who made this wonderful journey possible. He is the nicest clown I've ever had the pleasure of meeting.