I'm Not Pregnant... WE Are Pregnant

I forget sometimes, it’s his pregnancy too. 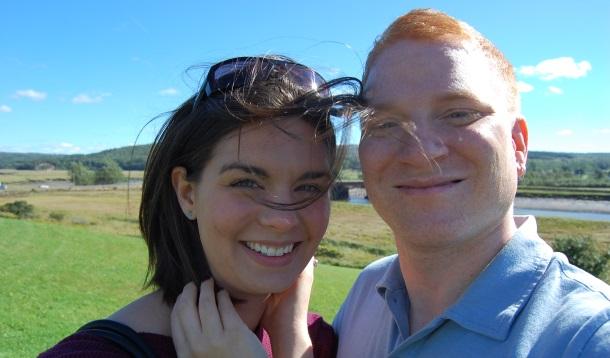 We were sitting on the big family room couch, catching up on episodes of Better Call Saul on Netflix. I’d had my late night pregnancy snack and I was ready to just chill and fall asleep.

You know how you put a show on with the intention of sleeping through it? Yeah. That was me.

“Do you think I’ll be able to feel it?” asked my husband.

Normally I’d say “Shut up, you perv… not now!”, but I realized he was talking about the movement of the baby in my belly.

You see, I started feeling the baby move extremely early for a first-timer. I was getting butterfly, popcorn, bubbles before I was even 15 weeks. I don’t know, maybe I’m just hyper aware - but I felt lucky to have those reassuring movements at such an early stage.

But my husband? Of course he couldn’t feel it that early. He also couldn’t (and still can’t) physically feel the exhaustion, the itching skin, the leg cramps or the stretching sensations ‘down there.’

But that doesn’t mean he isn’t experiencing this pregnancy.

At this point, I was 20 weeks and the kicks were fairly strong.

“I’m willing to bet if I sit quietly and if you put your hand right here, you might feel a little love tap.” I placed his hand softly just to the left of my belly button, where I’d been feeling most of the kicks.

Despite being exhausted and wanting nothing more than to stretch out with my pregnancy Snoodle pillow and drool myself to dreamy oblivion, I let him sit there, with his hand on my belly, watching TV, for more than half an hour. We didn’t budge.

And then it happened. As predicted, Baby delivered a swift and definite kick right where I said it would be. And my husband felt it.

He gasped. He choked up.

I just smiled back.

I didn’t want to take away from that moment for him.

I’d been alone the first time I felt the baby move and I will forever relish that moment just for me. I wanted my husband to have the same experience. Just him and lil’ Froggy (as we’re calling it for now.)

That night, basking in the glamour of Netflix, my husband had his first amazing pregnancy experience.

It’s easy to forget that he also carries the weight of our fertility struggles. Watching me writhe on a gurney in an emergency department, hours spent at my bedside at the local women’s hospital after significant complications due to a miscarriage resulted in emergency surgery. That happened to him too. I have the physical scars. He has the painful, sober memories.

I know he was walking around on pins and needles as we inched our way to the ‘safe zone’ throughout the first trimester this time around. He wasn’t overbearing, but he was incredibly protective of me. He was silent, but I know it’s because he was paying very close attention. He was bracing himself to catch both of us if the unimaginable were to happen again.

So my plan going forward is to express to him all that I feel with this pregnancy. I’m going to be an open book with him about all the amazing stuff.

Why? Because this is his pregnancy too. It took both of us to get us here. And I know there’s no way I’d get through any of this without him.

Erin Trafford is a former radio and television broadcast journalist turned DIY blogger; who's obsessed with all things paint and power tools. She's made over entire rooms for less than $500, is frequently seen hauling dilapidated furniture off the curb, and is incredibly proud of the day she decided to nail her old back yard fence to her basement wall.

She love dogs, cats, Han Solo and pie – probably in that order. Erin and her (incredibly patient) husband Dan bought their little house by the sea in 2013, just outside of Halifax, Nova Scotia. They have been working tirelessly since then to turn it into a castle, one project and one blog post at a time. You can find all their bloggy and house adventures over at DIY Passion. This year they are adding a baby into the blogging and DIY mix, expecting the arrival of their first child in the Fall.

Erin Trafford How a Pre-Baby Guest Room DIY Had Me Thinking Love, Future, and My Mom