Life Class from the Master 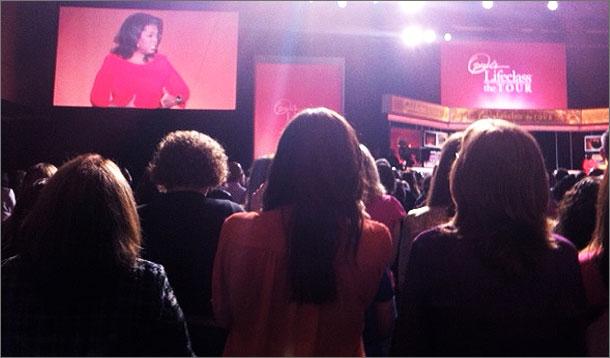 It was the biggest Life Class audience for Oprah yet and it was here in Toronto. Over 8,500 women of all ages, shapes and colours waited in line for hours to be part of the audience for Oprah's travelling Life Class television series on the OWN Network. And me. Joining Oprah onstage was her spiritual swat team: Bishop Jackes, Iyanla Vanzant, Deepak Chopra, and Tony Robbins. The room was electric with passion—it was like a revival meeting to pray at the alter of Oprah. I have to admit, I felt a little disconnected.

I am a big fan of Oprah, but less excited about the self-help movement. Spiritual and motivational speakers don't always sit well with me, especially when they pull religion into the mix. And that's what it felt like during the Life Lesson's warm-up to me. Even though I wasn't moved by the "Hallelujahs," tears and hugging your neighbour parts, my heart did start to race when Oprah—really OPRAH!!—came out onstage in a "tweetable" bright orange dress thirty rows in front of me. I wanted to run up to her and say "Finally we meet. I have so much to ask you about building a media empire."

Unfortunately Oprah had a show to shoot, so our heart-to-heart chat was put on hold. So, instead of getting it straight from the master, I watched the master at work. Remember, I used to do live interviews for over a decade. But watching Oprah sparkle onstage, bring out the best of her guests, and run the show with quiet strength was nothing short of impressive. While others around me were waiting for self-help nuggets about Gratitude like Tony Robbins', "A bad experience in the past can make you a better person in the future," I was waiting to watch Oprah when the cameras stopping rolling.

That's when I felt a thrill. In the first commercial break, when Oprah bent over to take off her leopard stilettos and joke with the audience that she'd had enough of wearing those killer shoes, I felt like she was talking to us as if we're girlfriends. Later on, she told all 8,500 of us she wore size 11 shoes. BFF! In another break, after an emotional discussion with an audience member who had lost her husband to cancer, Oprah teared up. How is it she still gets emotionally moved from hearing similar stories of loss from strangers? It's her amazing way of connecting and listening to those around her.

"You raised us!" yelled two twenty-year-old sisters from the audience. During the break, Oprah walked over to listen to the girls explain how they've been watching her show since they were eleven. The reality that THEY. WERE. TALKING. TO. OPRAH. dawned on them simultaneously and they both started wailing. Oprah calmed them down by suggesting they both stop crying and enjoy the moment. "You don't want to look back on this and think you blew it," she advised. "Live in the present and take it in." Sage advice. I was in awe. Seriously. The girls composed themselves and Oprah glided away.

That's when things became extremely exciting. Oprah was walking in my direction. I saw her "tweetable" orange dress move towards me, her security guards fiercely protecting her as she made her way through the giddy audience. Closer and closer she came, until she was eight rows away. And. She. Stopped.

The audience was going wild. Oprah was amongst us. Women started shrieking, many whipped out their cell phones to capture this life changing moment. Even men's voices were yelling Oprah's name. Not me. I was frozen, mesmerized by how relaxed she was in the crowd. "I see you," Oprah shouts out to us. "I know you exist."

Our face-to-face didn't happen. Shocking but true. But I was touched by the power of Oprah today. Someday we will meet. And when we do, I will live in that moment and take it in. 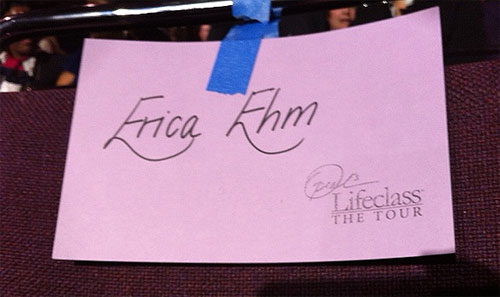 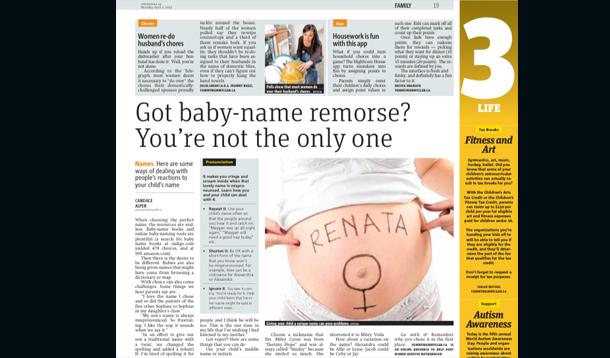 YMC's reach just got a little bigger! We're thrilled to announce that as of today, Metro readers across Canada will be privy to a fresh and fabulous family life section powered by the YMC Team!

The first Monday of every month, Metro’s family section will be filled with entertaining, newsworthy, and empowering articles written by our awesome bloggers, curated by YMC Editor Ali Martell.

The partnership between Canada’s number one free daily newspaper and YMC is a perfect fit!

Since our relaunch in December, we've worked so hard to make sure we're creating daily, newsworthy posts seen through the prism of motherhood. We're thrilled to be partnering with one of the most innovative publishers in Canada, which also just had a substantial redesign, to highlight the constant flow of stories posted daily on YMC.

We love how Metro is literally on the street, connecting with their readers, and creating easy to read relevant content for people on the go. That grassroots vibe is very much in keeping with the YMC vision of having a national team of passionate bloggers, bringing the daily challenges, concerns, and celebrations facing moms across Canada to life.

This relationship would never have happened without the tenacity and vision of Charlotte Empey, Editor-in-Chief at Metro. I met Charlotte years ago when she was running Canadian Living magazine and I was hosting Real Life with Erica Ehm on the Life Channel. Charlotte was a few year older than I. She embodied the kind of woman I wanted to be. A leader in the publishing field, incredibly bright, Charlotte remains genuinely down to earth, kind and curious. That combination has served her well. Now a groovy grandmother, Charlotte is firmly in control of Canada's number one free newspaper. I am absolutely over-the-moon to be working with her and her whip-smart team.

Want to see the fruits of our labour? Pick up a free copy of Metro or you can download the Metro News app here, and never miss any of our family friendly content.

We're very excited! What do you think of our new partnership? Erica Ehm Exposed! How to Drive 2115 kms With Kids