Lopsided use of money and technology 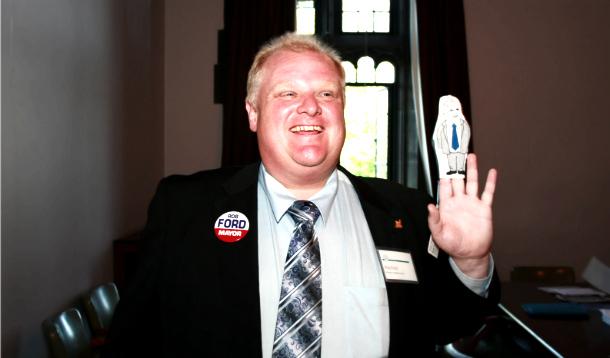 Almost 4,200 people have made an online donation in the past few days to quickly raise money for a cause. Victims of the Boston marathon? No. Relief for people who lost their home in the Oklahoma hurricane? No.

The truth of the matter is, those thousands of people have donated OVER $100,000 (so far) so that the video of Toronto Mayor Rob Ford allegedly smoking crack can be bought by media outlet Gawker. Over one hundred thousand dollars raised in just a few days, and the total is rapidly growing.

When Gawker broke the news story of Rob Ford, they reported that they had been offered a video by a drug dealer of Mayor Ford smoking crack cocaine. Only thing is, the selling price of the video was $200,000 and they didn’t have the cash.

So Gawker went to Indiegogo.com, which is a website where people can create a platform to raise money, usually to help funds for the arts, or an entrepreneurial or charitable cause. The Rob Ford video-purchase platform is called “Rob Ford — Crackstarter” (Crackstarter being a play on words for “kickstarter” which is commonly how these Indiegogo platforms are referred to). The description on the campaign’s main page is “Please help us raise enough money to purchase and publish a video of Toronto Mayor Rob Ford smoking crack cocaine.”

For just $200, you too can have a limited edition print hand-drawn digital painting of Rob Ford smoking crack cocaine. 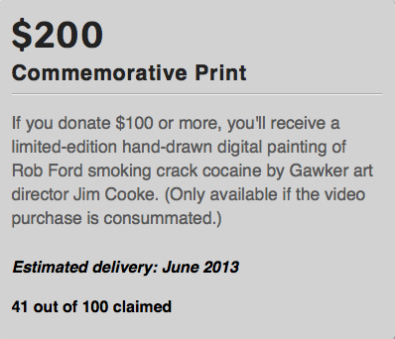 If you were hoping to donate $25, sorry that category is sold out: 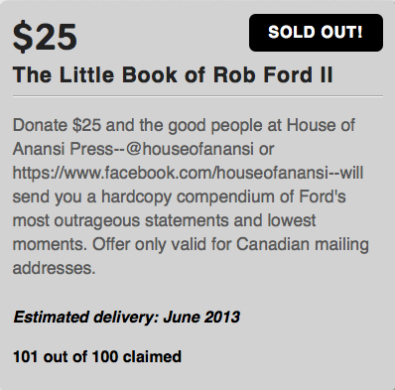 When I heard the news of the Rob Ford — Crackstarter campaign, it made me a little sad. Sad to think that thousands of people feel a trashy video like this is something worth donating to. Whether or not this video exists, it just seems an unfotunate reflection of our society and priorities when over $100,000 can be raised in just a few days, yet a local food bank or hospital will campaign for months just to raise a fraction of that. It boggles my mind when I think of what $100,000 could do for a charity like the Heart & Stroke Foundation, or the Canadian Cancer Society.

Is it just me, or is there something very wrong with this picture?

To me, the Rob Ford — Crackstarter Indiegogo.com campaign is a very lopsided use of technology and money, and nothing good ever comes from something being lopsided. It’s almost laughable, but sadly, it’s not. Maybe it’s just me, but I think that’s a shame.

Spill it! What do you think of Indiegogo.com being used as a fundraising platform for something like this?

Update - May 22: In Gawker's description on their Indiegogo campaign, they state: "If in the event that, for some reason, the deal goes south and we raise the money but don't get the video, Gawker pledges to donate 100% of the proceeds to a Canadian non-profit institution that helps people suffering from drug addiction and it's various consequences". However, it is important to note that they have set up their campaign as "Fixed Funding", which according to Indiegogo, means that all contributions will be returned to the funders if the goal is not met.

This just adds a whole new layer of disgust onto the entire situation.

Update - May 27: the $200,00 goal has been met. Now what? I'm guessing that a drug dealer in Toronto is busy making some travel plans for himself. Sad.