The Need For Feed 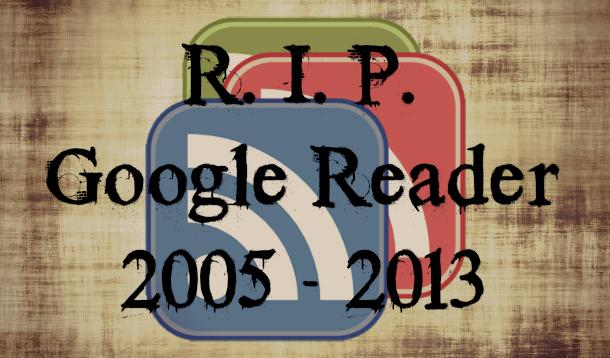 This was me on Wednesday night: 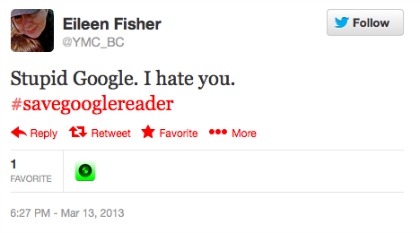 I had just read (ironically) in my Google Reader that Google had decided to shut down its popular RSS reader platform effective July 1st, 2013.

I have been using Google reader daily pretty much since it was launched in 2005. For me, this news was like hearing that Facebook was being shut down. Google Reader is like my morning paper, only it’s neatly organized into different folders that I have lovingly curated over the past eight years, with each new subscription carefully placed into just the right place so that I can find it easily every day.

Yep, I’ve shown my love for my Google Reader each and every day with my morning coffee in hand.

And to give that love back to me, they’re shutting it down on Canada Day.

It's a stupid decision, and it has made me sad. 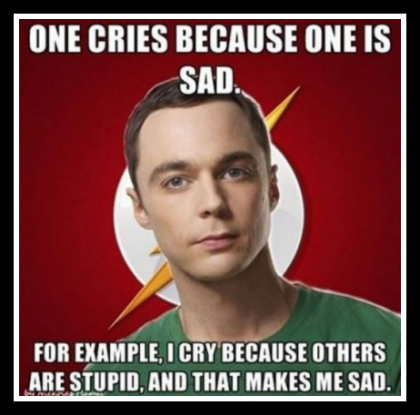 So, after I sent out a few angry tweets and finally came to the realization that #savegooglereader was trending but was not really going to make a difference, I started to look at alternatives for reading all of my favourite blogs each day.

For me, being able to use an RSS reader that I can synchronize across my different devices is key. One minute I’m reading blogs on my tablet, then later in the day I’m reading them on my desktop. I don’t want to keep re-reading the same ones – having a sync is incredibly important.

That being said, after making myself a large cup of coffee (that may or may not have had some Bailey’s in it), I sat and did some research to find a good replacement for Google Reader. Here’s what I found:

NewsBlur seems like a pretty good alternative to Google Reader, except for the fact that their free account only allows for 64 sites and 10 stories at a time. More than that and you have to pay $1 a month. Their website didn’t offer a lot of information without signing up for an account first, which I didn’t do because honestly, I don’t want to pay to read my RSS subscriptions ever day.

NewsBlur is available for iOS, Android and Web

The Pulse reader is relatively new (2010) but their app was named one of Time’s Top 50 apps for 2011, so obviously they’re doing something right. They have a content catalogue and are looking for partnerships with publishers and brands, so it wasn’t quite the right feeling for me. I didn’t want to do more browsing on suggested content, I wanted to organize the content I had already found. I didn’t see a way to import my current list of subscriptions from Google Reader either, so although Pulse is chock full of news and info, it wasn’t the replacement I needed.

Pulse is available for iOS, Android and Web

When I first tried to connect to Feedly, their servers were crashing big time. It was pretty clear that all of the Google Reader users were flocking over to Feedly right away. It didn’t take long for Feedly to upgrade their servers though, and by the time I’d made a 2nd cup of coffee, there was no problem getting on to their site. I liked how the organization of the feeds appeared, and also like the new content that was suggested for me.

After Google Reader’s announcement, Feedly announced that they were working on a Feedly clone of the Google API, making a seamless transition for Google users.

Feedly is available for iOS, Firefox, Android and Chrome

So for my use, Feedly has been the clear winner to replace my beloved Google Reader. Aside from the other choices I’ve outlined here, you can also check out Taptu, Flipboard and Google Currents.