Distracted Driving Stats On The Rise 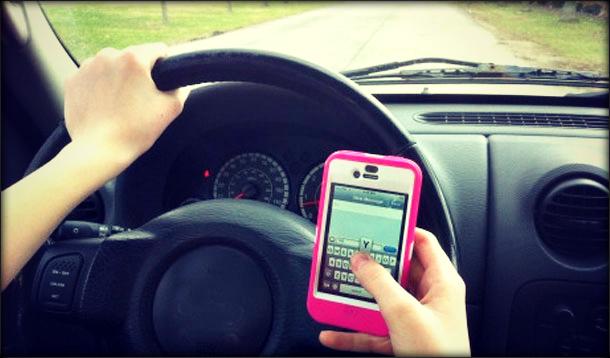 Police in BC are trying to make a change in the laws regarding drivers and the use of hand-held electronic devices. Right now, if you are caught, you will be fined $167—the police want that to change so that fines for a first offense are increased, then the second time you get caught, you lose your cell phone for 24 hours. Get caught again and lose it for five days.

Would that make us all think twice about picking up the phone while we are driving?

Obviously the numbers for 2013 are not complete yet, but it’s reported that last month in BC alone, more than 5,500 tickets were handed out to drivers using hand-held electronic devices.

The very scary thing is, these numbers show probably only a fraction of how many people are actually driving around with a cell phone in their hand. Drivers always seem to have an excuse:

They are all excuses.

After spending three weekends on the road in an RV, being able to peer down into cars driving on the highway, Candace was shocked at the number of drivers she saw zooming along the highway while they were using a cell phone. Driving through Washington, she counted 20 drivers in the space of 10 minutes, texting and driving.

There’s something wrong with this. So, so wrong. How would we all feel if it had been 20 people with a beer can in their hands instead of a cell phone? Probably pretty angry that people would be so stupid and risk their own lives along with the lives of others.

Having a cell phone in your hand while you are driving is just as bad. It may as well be a beer can.

Last year I came across this photo of a police officer posing as a homeless person, with a very simple message: 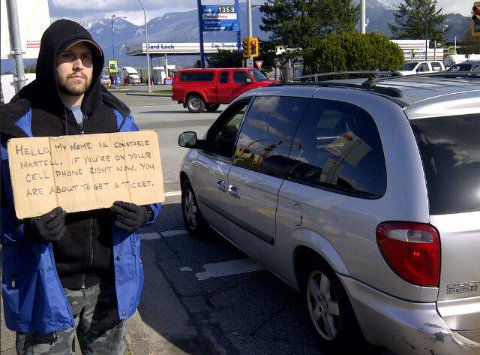 I posted it on the YMC Facebook page and to-date, this photo generated one of our biggest online conversations ever. Take a look here at what people had to say about it.

The comments ranged from calling the police "devious," to a virtual cheer for the ingenuity at being able to make people pay attention to this issue. Reading through them all, it’s really clear that drivers using cell phones are a big problem, and it’s only getting worse.

For the most part, everywhere you look it seems that more and more people agree that using a cell phone while driving a car is wrong, dangerous, and should not happen. So why do drivers keep doing it? I applaud the idea of seizing driver’s phones if they are caught using them while driving. The Attorney General doesn't agree with me, but I'm hoping she will come around and change her mind.

And not only are we all seeing more and more people breaking the Distracted Driving law, we're also hearing more people admit to doing it and also doing it in plain view of others. For real.

In my mind, drivers are supposed to be in control of a vehicle, and there’s just no way that can happen if there's a phone in the hand of a person driving a car. No way.

What do you think? Is this idea of seizing phones a solution to help the problem, or is there something else that should be done?