Mental Health Is Not A Joke 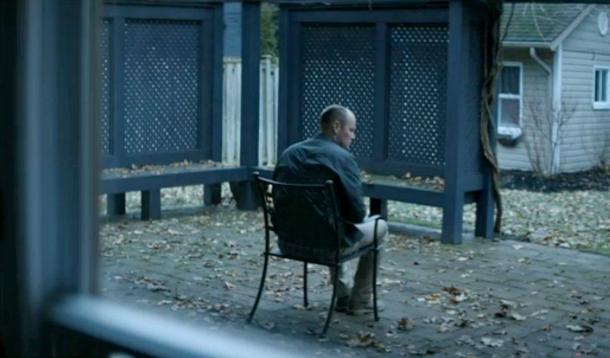 BAM! All of a sudden this morning, my Twitter and Facebook feeds were full of posts about ING Direct.

It’s all about an ad that ING Direct has recently promoted for RSP season. The tone of the ad is dark and at first glance, you’d think it was talking about something very serious, but it’s actually a tongue-in-cheek satire about the anxiety of RSP season. After the ad first aired, it didn’t take long for Canadians to speak up at the insensitive parallels between the tone of this ad and the underlying comparison to the effects of mental illness.

According to MarketingMag.ca, the ING Direct campaign was developed after “research into consumer attitudes towards RSP season found that it tends to produce symptoms such as stress, anxiety and confusion. “The message is ‘We can help you.’”

That may have been the intended message, but it's not the one that was received by a majority of Canadian viewers. It didn't take long before ING Direct’s Facebook page and Twitter handles were bombarded with comments about the ad, with demands for it to be removed.

Personally, I also thought the ad was in bad taste. Making any sort of comparison to an illness or disability to buying RSPs is tasteless and not something to be proud of at all. Clearly their marketing department made a mistake in the creation of this video, and it’s hard to understand why nobody stood up and said “Hey, this is offensive and wrong!”

So here we are now a few weeks after the video’s release, when all of a sudden thousands of Canadians are standing up and saying just that. They do not like what ING Direct did, and they went straight to social media to let them know.

And right here, I have to hand it to ING Direct and their social media department for how they handled the backlash.

They responded. To each and every person who commented. 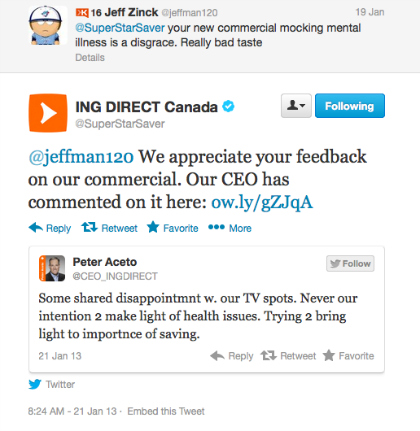 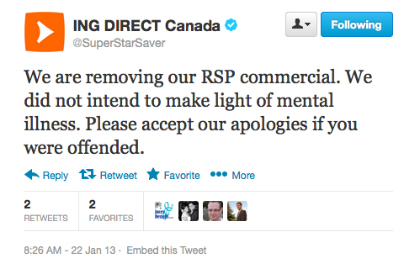 ING Direct apologized, no excuses, just a straight out personal apology to everyone who left a comment about the video. Then they posted the apology on their Facebook and Twitter pages to reach out to others who had not commented yet. They let everyone know that they were listening, the ad was being pulled and that they were truly sorry for offending anyone with their commercial, that it was never their intention to make light of health concerns related to mental illness. 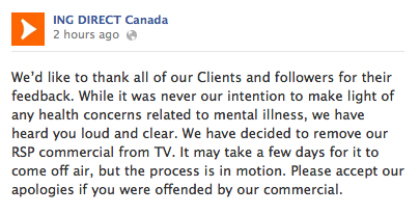 THAT is how you handle a mistake. Listen to what your followers and fans are saying to you. Own up to it, apologize for it and carry on.