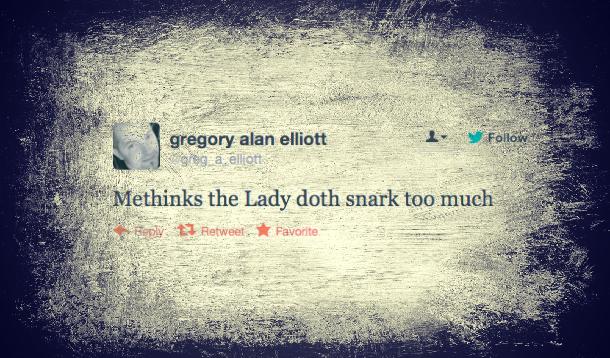 The news spread swiftly yesterday, which is pretty much the norm for anything being discussed on social media. Unwanted, harassing tweets from a 52-year-old Ontario man had resulted in him being changed with Criminal Harassment.

The last tweet sent out by the accused, known as @greg_a_elliott, seemed foreboding:

Well apparently, it wasn’t too much for one woman's local police department. Whatever Mr. Elliott said to the alleged victim that has had the charges brought against him, it was enough for her to file a police report on him, and for the authorities to charge him.

Reports say that the woman told the accused to stop communicating with her, but he ignored that. The end result left her afraid for her safety.

As awesome as social media is, there is a scary dark side to it, and this news only proves it. I’ve read so many stories of “tweet-spats,” witnessed quite a few myself and even partaken in a few. It’s so easy to tweet out stuff before thinking first, to type out the first thing that comes into your head, to react irrationally to someone who is a total stranger.

That’s what gets me. The cloak of invisibility that people hide behind online, tweeting and posting things to people they don’t even know, forcing them to the point where they are afraid for their safety.

A good argy-bargy is one thing (you can all stop pointing at me now) but there’s nothing funny about criminal harassment. Nothing at all.

Reading through various tweets today that referenced @greg_a_elliott, a majority of them sounded happy or relieved that these charges came about. There were a few that seemed to be giving him the benefit of the doubt as well & it will be interesting to see what comes of these charges.

Toronto's biggest Twitter troll has been charged with criminal harassment of @amirightfolks: http://bit.ly/10ex1Ze (h/t @dtopping)Jonathan Goldsbie
Have you been harassed by @greg_a_elliott ? If so, please contact @TorontoPolice to assist with investigation. http://www.torontopolice.on.ca/newsreleases/release.php?id=25060heather
@CBCToronto @greg_a_elliott may have very bad #politics but in RL he wdnt hurt a fly. The #media is blowing this out of proportion. #rightsnatalia
@greg_a_elliott saw ur globe & mail article about the harassment It took me all of 5 mins to see that u may be aggressive but not criminalE
And the tweets sharing thoughts about harassment and stalking on Twitter sprouted a thousand conversations...
In anticipation of any "you just did this to prove a point" criticisms, I did this bc he was making me feel unsafe/miserable. Worth noting.Steph Guthrie
@GMPBlackley hi guys/girls how do I report someone for stalking/harassment on twitter? And hello - long time no speak!Chris Barlow
Stalking charges related to Twitter rare in Canada: RT @newstalk1010: Man faces harassment charges for tweets http://bit.ly/SWzmlGHedy Korbee
How should the issues in this Twitterific site of struggle be resolved? http://www.thestar.com/news/gta/article/1291189--man-charged-with-harassment-after-twitter-attacks @A_M_L_Neil Andersen
@HFXMermaid I'm sorry to hear you're experiencing something similar, but am sending you thoughts of solidarity.Steph Guthrie
@madhatressTO @the2scoops I just did too. Yup, it's the fault of the victim. Sounds bloody familiar, doesn't it? :(Catherine Solmes
Yes, you can ignore and block. But blocking someone who continues to tag you on tweets and makes you feel unsafe needs to held accountable.Jason Carlin

Above all else, I hope it gives us all a wakeup call that in social media, we need to talk and treat people with the honesty and respect that we would if we were sitting in the local coffee shop together having a discussion.

Trolls need to stop hiding behind the online Cloak of Invisibility, because guess what? We see right through it.