Did A Hacker Bring Down The Internet Giant? 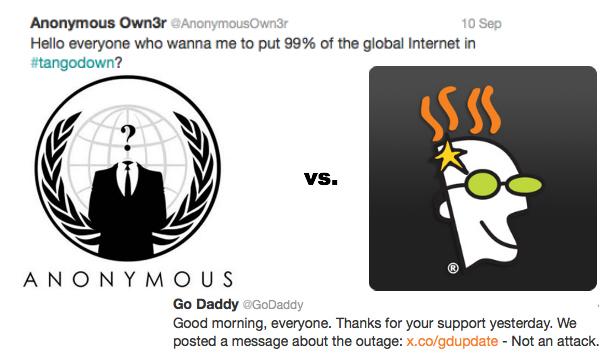 Yesterday millions of people’s livelihoods and businesses were brought to a halt when websites hosted by popular GoDaddy.com came to a crashing halt.

And what caused the crashing halt? Supposedly a hacker. With a point to prove.

I should probably be honest here and admit that the first time I wrote the sentence above, the phrase was “jackass hacker” but I counted to 10 and then edited it out.

I first became aware of the problem when a few of our bloggers asked me if we were having any problem with pulling up the YMC site. We checked it out and everything seemed to be ok, but I still wanted to keep an eye on things because it’s always odd when a couple of people seem to have the same problem. So I asked our editorial team if they were having any problems with the YMC site and they too, said everything seemed to be alright.

And then our amazing web editor Karen jumped into the conversation and said: “If anyone has sites on GoDaddy, it just got hacked. Millions of sites are down.”

Karen creates and administers websites for a living. It’s her livelihood. Her phone was ringing off the hook and her customers were freaking out. Her workday was instantly turned upside down but it wasn’t because of anything she or her clients had actually done.

Our Senior Writer Sharon was also affected by the GoDaddy hack. Her husband owns a business and is a GoDaddy.com customer. As soon as she heard what Karen told us, Sharon went to check her husband’s website and sure enough, it was down. Sharon had a lot to say about what had happened, and if you know Sharon, you know there were a few F-bombs included.

After going straight to Twitter and Facebook to find out more, I found out that a hacker named AnonymousOwn3r was the hacker claiming responsibility for this. Reading through his twitter stream as the rest of the world tried to fix and recover from the fiasco he created was interesting. Some of the things he said: 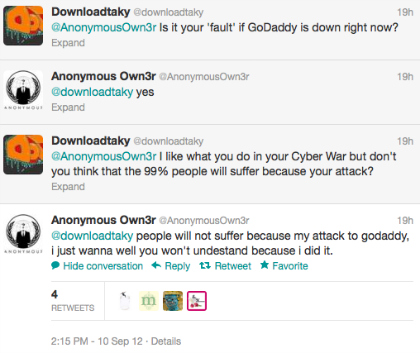 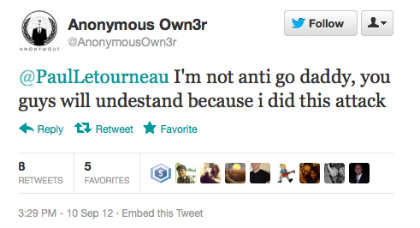 So essentially he said that he did this, and he did it because he had a point to prove, didn’t hate GoDaddy, people would understand and people will not suffer because of what he did.

And of course he RTd anybody mentioning him.

I posted the news on the YMC FB wall, because I know a lot of our fans have websites of their own. Many of the people that responded said that yes, they had been affected by the outage. And there were questions about credit card info, prosecuting asshat hackers like this and why people can’t use intelligence like this to actually do some GOOD for the world.

What happened yesterday isn’t funny. Screwing around with people’s business and livelihoods is a dumbass move that ultimately is only going to annoy people, not get them singing your praises.

Twenty four hours after the GoDaddy hack, the anger is subsiding, websites are back up, GoDaddy is recovering and no doubt having one HELL of a security meeting today. They aren’t saying a lot about yesterday’s outage, but they have said that they were actually not brought down by a hacker, but instead had a “site outage.” If that’s true, then it’s hard to understand why someone would risk legal prosecution by taking responsibility for it. Hopefully more light will be shed on this today.

And... someone has already made a very clever parody of the hacker. It’s a good laugh, so enjoy it before a hacker takes YouTube down.

Eileen Fisher: GigaMom Kmart Wants You To Ship Your Pants