How Bad Is Halloween Candy For Your Kids? 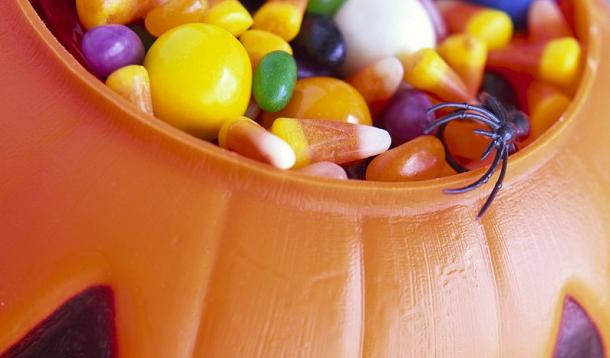 Are you going to let your kids have Halloween candy this year? Will sugar make your kids hyperactive? Or worse—is sugar toxic?

Sugar has recently become a hot-button topic. There have been YouTube videos about sugar that have gone viral, The Fifth Estate episode that aired earlier this month, and some very heated debates between experts. There have been some pretty fiery debates between regular folks, too—check the 738 comments under this CBC post. Everyone seems to have an opinion on sugar, and those opinions seem to be strong ones.

Trouble is, not even the experts agree. And there’s a lot more research to be done. But can we all just wait patiently until they’ve done all the studies, and everything has been clearly figured out once and for all?

We have to decide what to put in our kids’ lunchbox today. We have to make the call on birthday party treats right now.

So we do the best we can. And right now, here’s what I’m thinking: sugar is not evil. We are hardwired to crave sugar, from a survival/evolutionary point of view, and the truth is, our bodies and brains require glucose for energy. For that, and many other reasons, we cannot do away with sugar altogether.

But excess sugar is not a good thing. Excess sugar is undoubtedly linked with a lot of health problems: obesity, tooth decay, heart disease, and diabetes, in particular. Cutting down on sugar intake is something we probably all can, and should, do. How to do it? I’ll get to that in a minute.

When my first son was little, we lived in a condo in Vancouver. And my boy was (and still is) very, very active. Underneath us lived a woman who was in her fifties, single, no kids. We had hardwood floors. You can see where I’m going here. It was a constant source of stress to keep my healthy, happy, naturally exuberant kid quiet, and stop him from running up and down the halls.

One day my downstairs neighbour asked me, pointedly, if I gave my son a lot of sugar. (I didn't, and even when he did have something sugary, it made zero difference.) But she insisted on schooling me about the evils of sugar.

It was a very awkward conversation.

(Side note: the next people who moved in were a retired pair of empty nesters whose two boys were all grown up and they made a point of saying: DO NOT worry about the noise. We’d be more concerned if there WASN’T any noise coming from your apartment! I gave them big hugs. Often.)

But that's just my experience. What does the research tell us about kids and sugar and hyperactivity?

Well, like many things, results have been somewhat conflicting. However, several years ago a meta-analysis of hundreds of studies on the subject concluded there was no connection between sugar and ADHD.

So why do so many parents swear their kids get wired on sugar? Some scientists have explained this with a hypothesis that certain kids are "sugar sensitive." Which means sugar doesn’t have a universally negative effect on all kids—just a few of them.

Another explanation is this: sometimes, we see what we want to see.

In one particularly revealing study, children with “sugar sensitivity” were separated into two groups. One group was given sucrose (table sugar), the other given artificial sweetener. Their parents were told which substance their kids had received, then asked to rate their kids for hyperactivity. The parents of the sugar group rated their kids' behaviour as being much worse than the sweetener group. The punchline: in truth, both groups had received sweetener.

That said, we undoubtedly have more to learn. I read a theory recently that the problem isn't the immediate response to sugar—instead, it’s chronic, excessive sugar intake that may lead to hyperactivity and ADHD-type behaviour by causing changes in the brain’s receptors. But at this point that's just a theory.

Essentially, I don’t think it’s a problem for most kids to have Halloween candy, once a year.Or birthday cake from time to time. I do think if a kid has excessive sugar intake all the time, all year round, it can lead to problems. But that's not rocket science, right?

How to reduce your family's sugar intake? Well, you might consider cutting out sugar entirely for a period of time, to break the addiction, like a “sugar detox.” Here's how one writer did just that.

Here are some other ways to cut down on excessive sugar:

The bottom line? It's up to you how to handle Halloween candy in your house, but my vote is for maintaining a year-round sensible approach to controlling sugar intake...and at Halloween, a few mini chocolate bars and rocket candies are just fine.

(But not those Halloween kisses with the ghosts and witches on the orange wrapper. Those are just gross, right?)