How to Talk to Your Daughter About Her Period

A little planning can make it a lot less awkward 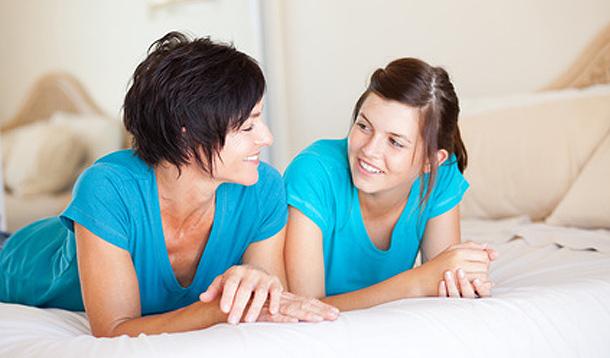 How many of you learned about periods from Are You There God? It’s Me, Margaret?

I’m pretty sure Judy Blume educated an entire generation about the finer points of puberty. Or, maybe, you remember having The Talk with your mother. For many of us, it's a poignant memory.

And now—flash forward several years—it's time for your own daughter to learn about the changes her body will soon be going through. Maybe you don’t exactly relish the idea of talking to her about it. Or maybe you’re looking forward to it, but don't know where to start. Either way, if your daughter is hurtling towards puberty at light speed, it's time to do a little planning and prepare yourself for "The Talk."

When should I talk to her?

Make sure you talk to her early. Nobody likes unpleasant surprises. The last thing you want is for your daughter to be shocked, confused, and scared by the onset of menstruation. How early is early enough? Most girls have their first period when they’re 11 to 13, so you want to open up the conversation well before this. Of course, period onset can be much earlier—even as young as 8—or later, up to age 16. If you pay attention to the early signs of puberty, that can help guide your initial talks. Most girls will have their first period about two years after their breasts begin to develop.

How should I explain periods?

Explaining the biology of menstruation is important, of course, but don't get too hung up on this. Most girls are more interested in the practical stuff: When am I going to get a period? What is it going to feel like? Can I go swimming when I have my period?

You'll need a nice, clear way of explaining menstruation. Explain to your daughter that when she starts having periods it means that her body is physically capable of becoming pregnant. The ovaries in her body will release an egg every month or so, and that's called ovulation. During that time, hormones in her body will be preparing her uterus for a pregnancy by thickening the lining. If the egg isn't fertilized, the lining of the uterus is shed through the vagina—and that's a period.

Can I Just Wing It?

Probably not a good idea. You may think you know everything you need to know—but you may be caught off guard by the questions your daughter has. Like: how much blood do you actually lose during a period? (Do you know? The answer: about 3 tablespoons. Surprisingly little, right?)

A little advanced prep can prevent a lot of awkward moments. And brushing up on the facts will allow your daughter to see you as a trusted source of information. But please don't randomly google the subject (here's why that's a bad idea, in general). Instead, check authoritative websites for information and tips on having The Talk.

And while you're at it, check out www.BeingGirl.com, a website aimed towards girls themselves—which can give a little insight into the kinds of things girls want to know, but are perhaps too shy to ask.

How do I answer the question: When will I get it?

The trouble, of course, is that nobody can predict exactly when a girl will start getting periods. As I mentioned, most girls will have their first period about two years after their breasts begin to develop. As another guideline, it's common for a girl to start menstruating at roughly the same age you did.

Typically, what girls are expressing when they ask this question is the fear that it will happen at an inopportune moment. Help your daughter by coming up with a plan, including things she might say to a teacher if she has to excuse herself to the washroom. Even if that teacher is (gasp!) a male. Supply her with an emergency pack for her locker or backpack that includes a pad, a tampon, and a fresh pair of underwear. Explain that many school and public bathrooms have coin-operated dispensers for pads and tampons, and that the school nurse might have supplies.

What else does she need to know?

Discuss how to use pads or tampons, and that it's important to change them every three to four hours. Many girls prefer to start with pads, but it's perfectly okay if your daughter wants to try using tampons right away. Explain that it might take some practice to figure out how to insert them, of course. Have various products ready and available to show her, as props for your talk, to make the concept a little less abstract.

Even better, show her this video that discusses how to insert a tampon. It's a big-sister style explanation and uses plain, no-nonsense language.

How should I broach the subject?

Some girls may come right out and ask you about it. Others may need a little more encouragement, and you'll have to gently initiate the conversation. Make sure you keep things casual and open, and that she knows you're available to talk anytime. Consider having a series of shorter sessions with your daughter, instead of one exhausting marathon.

Be sure to open the talk up to all kinds of other topics (body changes, odour, mood changes) and let her know that there are no silly questions. That's the beauty of having a series of talks—you can tackle different subjects each time. Also, it's a great idea to talk about what boys are going through at this stage of life, too! Girls will be curious about this but may be too shy to ask.

Make no mistake, it's a delicate subject you've got on your hands. Preteen girls get embarrassed at...well, pretty much everything...so they’re definitely going to get embarrassed at this talk. That's okay. It’s not a reason to avoid the subject, but it is a reason to plan for it. You can give your daughter all the information and confidence she needs, while making make wonderful memories for the two of you.

So tell me, have you had The Talk with your daughter yet? How did it go? I'd love to hear about your experiences and thoughts.

This is proudly sponsored by our friends at P&G.
pgeveryday.ca/always-changing & beinggirl.com