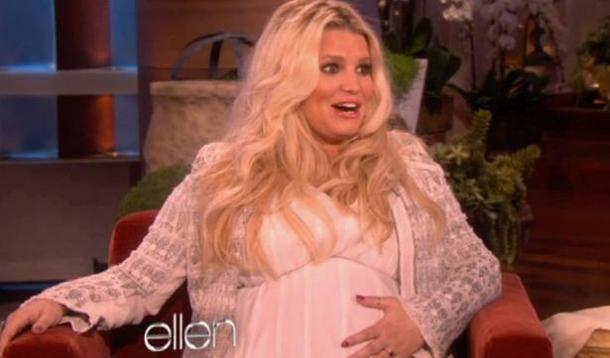 Yet another celebrity postpartum weight loss spectacle to awe and inspire us. Or make us feel terrible about ourselves.

Jessica Simpson has signed on with Weight Watchers to be their next official spokesperson, reportedly hooking a $4 million deal to lose the baby weight within a year. One has to assume her paycheque depends on her successful weight loss.

Hmmm... that is a scenario I can sort of relate to, actually.

Jessica's pregnant body was the subject of tons of media attention. She definitely embraced the pregnant appetite and also claimed to be retaining more fluids than the Hoover Dam. OK, that's my wording, not hers...

I also went crazy during my first pregnancy, gaining about 55 pounds thanks to healthy but LARGE lunches and dinners and a very friendly relationship with my local pizza joint. After years of restricting myself, it felt so right to eat with abandon that I went a little over the deep end. So I can kind of sympathize with Jessica. Annnnnd..... that is the last time you'll ever hear me compare myself to Jessica Simpson.

Jessica's pregnancy body was heralded by some as an example—why should she be concerned about restricting her prenatal weight gain? Why not enjoy pregnancy? Others, however, derided her for letting herself go—Joy Behar of The View even said, "The girl is fat." Really, Joy? Come on... If there is one rule of sisterhood it is:

Everyone knows that rule! Even men know that rule. The truth is, fame is fickle and the people only love you when you're up. Or down, as weight goes.

So Jessica was a hero for gaining too much weight. Let's be honest, whether she enjoyed her pregnancy or not, gaining 60-70 pounds over 10 months (of which only 15-20 pounds are composed of fetus, uterus and fluid) is probably not healthy. But it's nobody's freaking business. Kudos to Jessica for being upfront and proud about the fact that she was enjoying all her favourite foods and feeling the consequences. Her pregnancy quotes are worth a google and she gives the average rude comedienne a run for her money (making me question that dumb persona she is known for... the girl might be too funny to actually be dumb,

"Kraft mac and cheese with Lawry's seasoning salt is the breakfast for pregnant champions!"

So she's a hero for eating Kraft Dinner for breakfast and gaining more weight than is recommended by most of our obstetric authorities. OK... Now she will be a hero for eradicating it from her body in the span of just a year. Word is she is already on a drastically low-carbohydrate diet and working out with her personal trainer, Harley Pasternak. What's the message here? Gain as much weight as you want, even at the risk of your own health, during pregnancy... but drop it all as if your life depends on it in postpartum. You're cute when you're pregnant and worthless after that baby comes out. BUT... if you can contort your body to make it appear as if you never even had a baby in the first place? Well, then you're worth 4 million dollars.

Please, for the love of God, stop holding celebrities up as bastions of fitness. They clearly haven't any more of a clue than the rest of us. Because—if a $4 million deal depended on it—wouldn't you do whatever it took (nannies, night nannies, night nurses, abstaining from breastfeeding, several hours per day of exercise, stripping all carbohydrates from your diet, enemas, cleanses, diuretics) to lose that baby weight?

Dara Duff-Bergeron: Sweaty Mummy You Won't Be Happier When You're Skinny

Dara Duff-Bergeron: Sweaty Mummy How To Squeeze In Lunch AND A Lunchtime Workout