Flax? Who Said Anything About Flax? 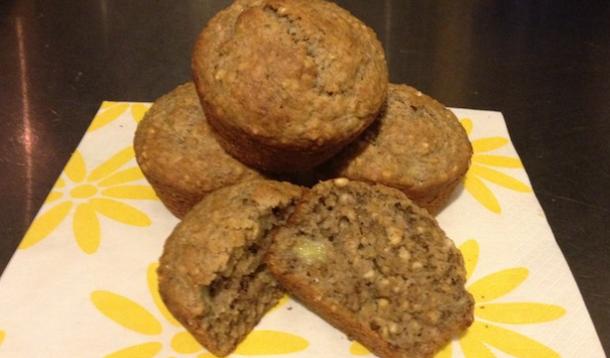 These Banana Oat Muffins are a snack you and your kids will agree on! We've been eating them for years, and now the Sweaty Kids and I do it together—it's a great muffin recipe for kids as there are several wet ingredients to be measured and quantities don't have to be precise. Great for a breakfast muffin with some protein on the side (cheese, yogurt or eggs, maybe...?). I don't make them often, but lately I've been adding things like yogurt and... shhhh.... flax.

In my pregnant days, I baked. I don't really like to bake, but everybody pregnant likes to bake. In fact, that's probably how baking was invented. Some pregnant woman thousands of years ago took a look at another cob of maize, put on some Feist, and made corn muffins. OK, so that pretty much sums up months 8 through 10 in my first pregnancy...

One of my go-to muffin recipes, during that magical time when a girl must work to GAIN weight, was Banana Oat Muffins. I can't recall where I got the original recipe but I would place a bet on AllRecipes.com, which is an interesting database of recipes contributed by its members. Usually I don't trust "recipe communities" for my meals BUT the membership on this site is so huge that you can get hundreds and, sometimes, thousands of reviews. I think that's a pretty good sample, and if several hundreds or thousands of people give something 4-5 stars, I'd consider it worth a shot.

I've tweaked these muffins to make them slightly less sweet and dense, which is how I like my muffins. Using older bananas will increase sweetness without the addition of extra sugar. Throw older bananas in the fridge or freezer for a few days (or longer in the freezer) and they will break down and nearly liquify, eventually, which makes for FANTASTIC muffins. Today's batch was with spotty, soft bananas but not refrigerated/frozen, so they turned out with nice chunks of banana for texture, but less sweetness. And here we go...

2. Melt coconut oil, and place lemon juice into milk to sour for 5 minutes.

3. Combine dry ingredients and spices in a large bowl, and create a well.

Try them warm with peanut, almond or other nut butter for a GREAT treat!

Can't Get Pregnant? Maybe Your TV Is To Blame 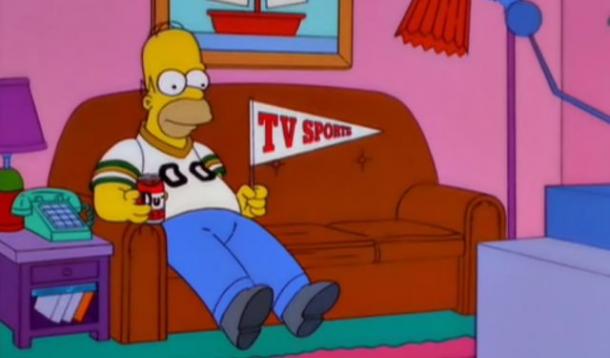 Good news if you're getting tired of sex with an agenda... If you and your hubby have struggled to conceive, there could be hope in the form of lifestyle changes! A study published this week in the British Journal of Sports Medicine reports that otherwise healthy young men who watch more than 20 hours of TV per week have almost half the sperm count of men who watch very little TV.

20 hours of TV sounds like a lot? Find out how much TV the average Canadian watches—the number might surprise you.

So if you can get him off the couch, how much of a difference might it make?

The researchers analyzed the semen quality of 189 men between the ages of 18 to 22—a time of life when testosterone and fertility should be peaking, no? Before you ask, they were mostly in the "normal" weight range and 75% were non-smokers. No known reproductive problems were common among the men.

Which were the most likely to be confronted on a daytime talk show and presented with paternity results? The active guys, of course!

The men who exercised 15 hours or more per week had sperm counts 73% higher than the least active men. The type of exercise didn't matter but the exercise was vigorous, not including lighter activities such as walking, housework, etc. If I were trying to get pregnant, I'd take a 73% better chance.

15 hours of exercise could be more than the average working daddy can fit into his weekly schedule BUT I'd hazard a guess that even a reasonable 5-10 hours per week (one hour at the gym 5 days per week plus a couple of jogs, or tennis, squash, hockey, etc. played once or twice per week) would make a substantial difference in sperm count.

TV viewing had the opposite effect. Those who watched 20 + hours had a sperm count that was 44% lower than those who watched the least (the low end was about 4 hours per week, or roughly a half hour per day if you are thinking of instituting TV rations for your better half...).

A reduced sperm count doesn't automatically mean your hubby is less likely to father a child, but the study does suggest a pretty strong correlation between an active lifestyle and a healthy reproductive system.

Even if you're not concerned about sperm count, vigorous exercise is also proven to naturally increase testosterone levels in both men and women. More testosterone = more mojo = more chances to get pregnant.

Now, if you are trying to avoid illegitimate children and future appearances on Maury, you might choose a film major for your next Mrs. Robinson encounter....

Trying to get pregnant?

The 3 questions to ask before you start fertility treatments.

Wean yourself from your TV addiction and build exercise into your day.