The Procrastinator's Guide To Writing A Wedding Toast

An insane anniversary in my life is fast approaching — and I did what I always do...nothing. 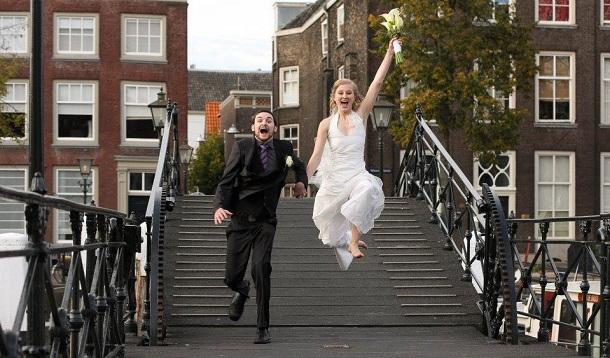 An insane anniversary in my life is fast approaching. A day as a mother I knew would come, someday, but not a day I ever really expected to mark. After 26 years as a parent, I’ve got birthdays, graduations, Christmases, Halloweens, Easters, and even “Moooooooom! I-think-I-got-my-period" days down pat. What's rattling me a little is my son’s wedding anniversary. Yes! Wedding anniversary!

In about a month he’ll celebrate his 4th year as a married man. Damn! A Married Man!!!! More days than not I feel like I’m not old enough to be married to a married man! So as this anniversary approaches, I've been warmly, and with some melancholy-coloured tenderness, reflecting on his wedding, a handful of years ago, in a postcard-perfect little town in Holland called Dordrecht.

He asked me to speak at the wedding. A simple toast. Nothing extraordinary, really. He gave me loads of time to prepare. He asked about 3 weeks before the event. So like the early bird I’m not, I laid in bed, night after night, and wrote script after script in my head of what I’d say, how I’d say it, how everyone would laugh and cry, how fabulous I was, and how great I’d look. Then, I wouldn’t write it. I wouldn’t commit anything to paper because it all sounded wrong. It sounded tinny and insincere. It all sounded wrong and tinny and insincere, and  I’d gained 3 pounds since I bought my dress for the wedding.

So, I did what I always do. Nothing. I avoided thinking about it, and I secretly worried (about the speech, and my growing Buddha-belly–egads!).

But the day of the wedding came, as days inevitably do, I sat through the service alternately crying and laughing and clenching my butt chakra. Afterwards, as I approached my beautiful married son with a glass of champagne, a bursting heart, and a mouthful of cheesecake, I asked, “Do you still want me to say something?”

“Yes. I do. You are going to say something, aren’t you?” He sounded nervous, trepidatious, like I might let him down.

“Of course!” I say, full of conviction and terror. But what was I…? What would I…? What was I to say?

And time stopped. And for 5 seconds I stood frozen. And as I looked at him, I knew there was nothing for it but to write. So I slipped off my shoes, borrowed a pen, found a quiet spot, and on the back of the wedding program around a photo of this new born couple, I wrote my speech.

What's a mother to say on her son’s wedding day? I’ve thought and struggled to find the words, and as many times as I’ve put pen to paper, I’ve tossed it aside—unsatisfied and unsure. So I’ve decided to do two things: share the wisdom of another and speak from my heart.

Then we met her—and as a family, we fell madly in love. But it was our 7-year-old, Bronwyn, that said it best when she said to me, “Mom, you know what I think? I think Jonah’s too young to get married, but he sure picked a beautiful, pretty girl to marry.” And Bronwyn was right, Jonah picked the most beautiful, pretty girl—inside and out—to marry.

But it’s a strange thing seeing your child in love. A strange thing knowing the scraped knees I bandaged when he fell off his bike, the sweet green eyes I dried when he was hurt or overlooked, and the small, cute bum I wiped when he……well…...when he……are another woman’s to care for.

So I stand here feeling strange, proud, emotional, and a little lost—but happy. Happy to know that there is such a woman. Such a Richelle. That she loves my boy, and will love him as long, and longer, than I will.

I love you Jonah—with my heart and soul. And Richelle—you’re part of us now. Our big, mad, crazy crowd, and we love you too.

So, please. Raise a glass. To Jonah and Richelle.

In the end, I think I did okay. It probably helped that most of the audience was Dutch and didn’t understand half of it. But I learned something about love and motherhood on that day, in that moment, it doesn’t really matter what you say, just that you say it—whether you look like a sausage in your too-tight dress or not.

Check out how this mom and son shocked their wedding guests, and why this father walked his 11-year-old down the wedding aisle (warning: grab a tissue!).