This Is The Hardest Part Of Sending Kids Back To School

Why this mom dreads September each year 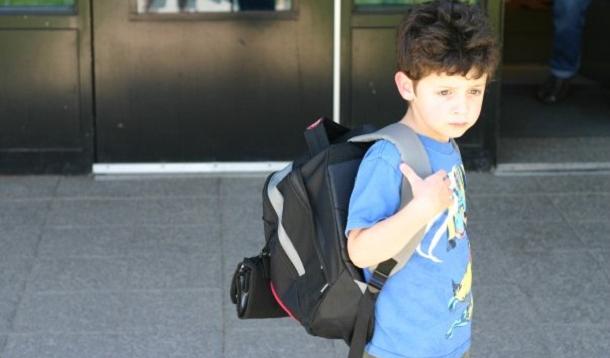 Back to school! Back to school! Back to school! You can hear it, can’t you? The battle cry of all summer-hardened parental warriors? We’ve spent the last eight weeks fighting the good fight—keeping the lawn mowed with everyone’s digits (hands and feet) intact and attached, keeping just enough semi-clean towels available to mop up the ever present hose-wet-kid-puddles forming on the newly refinished hardwood, keeping enough lose change and small bills to bribe the ice cream man to stay off our street, keeping our cool when we hear for the 928th time the phrase, “I’m bored” (though I have to admit, I seemed to flag at this parenting requirement near the end of July—I’m not known for my staying power!), and keeping the preschool ankle-biters and pungent preteens fed with enough watermelon, peanut butter, and popsicles to keep them from eating each other.

Time for celebration and jubilation, right? Time for all of the stay-at-home, work-from-home, work-out-of-home, overwhelmed, over-kidded, over-done parents to take a well-earned vacation day—a vacation day that arbitrarily excludes anyone too young to have pubic hair and not old enough to imbibe the tasty libations thus to be served—and crack a bottle of bubbly during the middle of the day.

It’s been a hard fought, hard won day of rest and relaxation.

Rest and relaxation! Oh, what a kidder I am. I slay myself.

I always approach the end of summer with the expectation that once the nose-miners are back in school, I’ll be able to finally, finally relax. I’ll have a clean, quiet house for at least six straight hours—no whining, bickering, angsty, needy kids leaving a trail of damp socks and potato chip shards across the house. Just me and my back-to-school bliss.

How after 20 years of first days of school I’m still kidding myself and expecting that the start of school means the release of the Mom evades me. The thing that catches me by surprise every year is that I miss them. I miss my kids. I miss all the irritating, frustrating, nose-picking, sibling-scrapping, knee-scraping misery. I miss it because, honestly, it’s easier and far, far preferable to  the agonizing, soul-twisting, back-to-school angst.

Maybe it’s just me. Some kids seem rather happy to go back to school. Some kids look forward to it. Not mine. My kids torture themselves, and me. Let me tell you what I mean.

My oldest daughter graduated from university a few years ago (with Distinction thankyouverymuch! I like to think Mama don’t raise no fools, but really I deserve zero credit—she worked like a Trojan. The warrior, not the condom, you dirty minded lot!). Two weeks preceding everyone else going back to school should be the time she reflects on her success, and not so secretly smirks behind her hand that she’s done, finished, broken the tape at the end of the race, but no, she’s a wreck. She wants to be heading back to the classroom—she’s one of a handful of people in the Universe who’s jealous she’s not going back to school. Her coping mechanism is to droop around dropping comments like, “Luuuu-cky!” or “I wish I was getting a new back pack.” The passive sarcasm literally pools on every horizontal surface.

Then there’s the full three weeks it takes to move our middle daughter back to university after a summer of the car spontaneously disappearing from the garage remarkably at the same time every potato chip and pretzel, and the last bottle of hazelnut syrup (I have no idea why, I just don't ask) has disappeared from the house. This should be an exciting time for her and us, but the frustratingly slow trickle of clothes out of the closet and the occasional box leaving the spare room is pure agony. When we finally get her moved in and settled, she has an overwhelming attack of doubt: “Am I in the right program? Am I any good at this? I think I hate all my classes! My roommate leaves the toilet seat up every time, and she’s a girl! What’s she doing in there?!”

But does the excitement stop there? Sadly, no. There also dwells in a dark corner of the basement the world’s only truly tortured 12-year-old existentialist. His worries go far beyond whether to invest in giants or archers to protect his village in Clash of Clans, or whether his sister called shotgun more times last week than he did. His dire preteen angst reaches epic proportions pre-September—will he have friends in his class, or if we leave a night light on in the hallway will the energy expenditure heat the earth thus melting the polar ice caps killing all the polar bears, or will he get the options he wants, or when will he ever fully understand exactly how souls animate our bodies?

And who do they all come to when they need answers, support, and packed lunch? Me. ME?!  It’s 4 pm and I still haven’t combed my hair! Back to school angst forsooth!

So I dread September. I dread the heart-twisting exhaustion of dragging a barge filled with my progeny’s back-to-school fears, angst, and insecurities down the lonely bumpy road of motherhood.

Give me back the simple summer days of my hysterical pre-pubescent daughter after her brother pantsed her in the front yard, or the pop and popcorn-fuelled full 12-hour Star Wars marathon happening in my family room filled with enough 20-year-old limbs to populate a mannequin factory, or the perpetually sticky, perpetually syrupy nature of the kitchen table after a Captain-Crunch-salt-and-vinegar-chip-Monopoly match (that resulted in near fatal amounts of blood loss), or the constant noise, the constant chaos, the constant kids.

If you liked this, check out: "Why You Need To Throw Your Uterus A Retirement Party" and "Back-To-School: 6 Great School-Themed Movies."