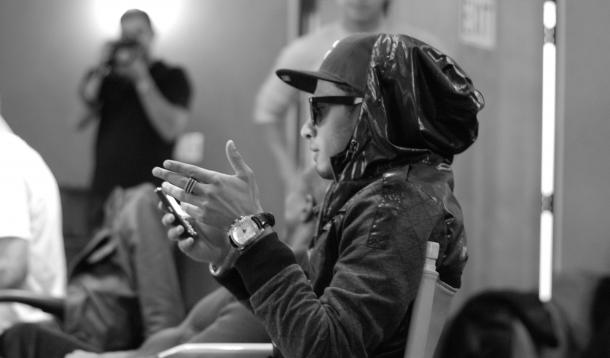 So a few weeks ago I retweeted one @realshawnisaac on Twitter. Why? He just happened to tweet my new favourite go-to curse word. You know for those times you can't think of anything else to say and you're completely frustrated and you need that one word. That. The word is a combo of three words—and it's my new go-to word. It's the multi-purpose word. Genius really.

Little did I know that Mr. Shawn Isaac, a 22-year-old from Orange County, California was out to conquer the world. A jack of all trades that covers everything from being a music artist, entrepreneur, CEO and MTV powerhouse.

So here's my one on one with @realshawnisaac

Official Bio: Shawn Isaac is a multi-platinum, Billboard Award Winning Drew Right Music Recording Artist. He did 5 shows on MTV and has been featured on the front page of Myspace Music and Forbes just to name two. Shawn is also the CEO of three companies and has won an international community service award from Wendy’s & Myspace.

You've been on the MTV circuit quite a few times now. How did the relationship initially start?

I was just connected to MTV and they knew about me and liked me so after I did the first show it was like a snowball effect - the others just kept coming. For other entertainers this speaks to the fact that first impressions are everything and the importance of networking.

Has their been an experience or encounter so far that made you step back and say 'I can't believe this is happening to me'?

So far, I've been blessed with a lot of great things happening to me, so this whole journey has me saying that, but I know the best is still yet to come, that's why I'm trying to continue working hard and giving the glory to God. But some instances would definitely be seeing myself on national television on MTV, having people ask for my autograph, being talked about on celebrity gossip sites, hearing myself on major radio stations or randomly at clubs/parties, and winning a community service award from Wendy's and Myspace where I got to team up with John Legend.

What was your initiation into the music business like?

Everything started off great - much of my success came early. But I definitely learned persistency is key to succeeding in the industry - it's a lot of trial and error. In the industry there's so much bureaucracy and many people are lazy and all talk - so you definitely have to take your career into your own hands. Because, ultimately, at the end of the day, if you don't succeed, YOU are the loser, no one else, so it's completely on you.

I grew up very much into singing so definitely people like Michael Jackson, Usher, Chris Brown, Al Green, The Temptations, the Bee Gees. And rappers, people like Tupac, Nas, Jay-z, Biggie, just all of the greats. I appreciate all types of music and love all the greats, so the list is too long - too many to name. But Michael Jackson definitely is the one who sparked my music interest...and my older sister is the one who introduced me to a lot of great music!

Any artists that you want to work with?

Too many to list but I've been blessed to already be working with so many people I admire like Drew Right, DJ Mustard, C-ballin, The Pack, MIMS, Kurupt and Jaeson Ma. I just signed my own artist,  the talented Rouzy Rouz.  I would love to work with any of the greats, those that inspired me, and definitely Kanye West. But maybe Kanye pre-ego and pre-Taylor Swift moment though.

Your single 'Fiend' —what do think the appeal of the track is?

It has downloads in the hundreds of thousands, past a quarter of a million I believe. I think the appeal is the dope beat, catchy and relatable chorus, and I would like to think my lyrics/verses didn't hurt either. It knocks in clubs and on speakers!

Yes, most definitely. It's the number one way to connect with fans. And some of the first questions you hear from execs and record labels are how many twitter followers do you have, etc. Sure, you can get famous without it, anything is possible, but it definitely doesn't hurt! Just don't let it consume you though - I definitely get caught up in it every once in a while.

You travel a lot and appear at countless events...5 things you can't leave home without?

The Shawn Isaac playlist —top 5 tracks that you can't stop listening to?

Ha!  I go through songs so quick. I will listen to a song a zillion times, but move on quickly. I constantly download new music. I get tired of songs fast—it's a problem. Right now I definitely have a lot of Pac, MMG, new music, and my own artist Rouzy Rouz in rotation.

What inspires the music you write/produce?

Jesus Christ. Mostly try to make not negative music, but rather neutral or positive, uplifting people and inspiring. I try to stay away from the negative subjects and cussing. I do love the fun tracks and the dance tracks though, so it's not always serious. And sometimes my emotions inspire it - so if I'm pissed or dealing with haters—there it is. But I'm trying to write more on the important things in life like God, not my own selfish endeavors and emotions.

Last word is yours…

I'd like to myself have more hit songs, hopefully a TV series on a major network like MTV, new record label situation, my artist Rouzy Rouz, progress with my companies, etc! Just trying to take-over in every way possible and looking to work with EVERYONE! But most importantly, not to sound cliché, but hopefully you'll see a better me…one who's dedicating my life more and more to God!

And finally in the tradition of James Lipton from the Actor's Studio:

What is your favorite word? Currently, it's "FIEND"—the name of my currently single feat Lil Jon.

What is your least favorite word? Santorum. Google it.

What turns you off? Opposite of everything I said above, so I guess the basic chicks. I want a Michelle Obama or a Beyonce, not just some accessory. I want a powerhouse like that.

What sound or noise do you love? My mom's, sister's or dad's voice! Family is everything to me.

What sound or noise do you hate?  Silence

What is your favorite curse word? Ha! No comment

What profession other than your own would you like to attempt? Business & Politics

What profession would you not like to do? Medicine. Can't do blood.

If heaven exists, what would you like to hear God say when you arrive at the pearly gates? Heaven does exist! And "You're on the guest list," but more importantly, "So is your family."

Like this interview? Check out another great celebrity interview here.