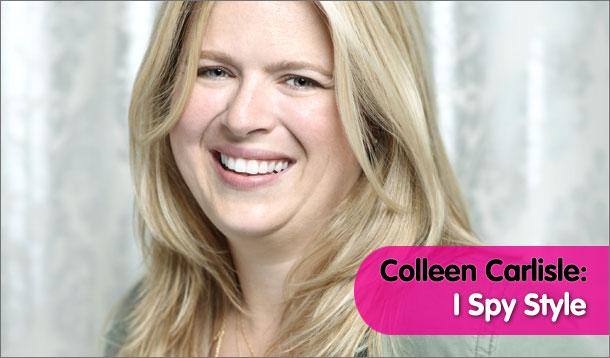 Man! Am I ever in a fashion rut! It’s a terrible feeling, especially since Fall has officially arrived and we all know it’s the best fashion season. Even according to CP24.

I’m sure it has something (everything) to do with weight gain. My feet haven’t stepped on my scale in months - the battery’s dead - and I’m eating Crunch n’ Munch for breakfast. At noon.

I’ve hardly had the desire to shop! I did, however, have the strength to pick up two pairs of Carole Hochman Lounge Pajamas at my local Costco and I'm completely and totally in love. I have hardly taken them off. I can't even lie; I'm wearing them right now. The bottoms are screen printed in various patterns. Today's are a deep mushroom set with leopard printed pants, my other pair are black with tiny pink starbursts. They are also avaiable in pale pink and light blue variations. Of course, there are no pictures available online as they are very likely manufactured specifically for Costco.

The fabric is appropriately described as 100% Simple Luxury (which in reality consists of 95% Rayon and 5% Spandex) and it feels like the softest and most divine fine knitwear I've ever worn. At about $15 per pair, they are an absolute steal.

According to her own website, Carole Hochman is "perhaps the single most influential woman in the intimate apparel and sleepwear business in the U.S. today". It seemed a lofty claim since I'd never even heard of her before but since her product has landed in my oversized cart and I’ve spent a few days in her sleepwear sets, suddenly, I'm all over Carole Hochman. I want to be her best friend and learn everything I can about her.

Carole revealed to Women's Wear Daily that she spent a lifetime designing fancy frou-frou sleepwear for one of the world's top fashion houses, Christian Dior, but felt like a fraud because she herself retired for the evening in flannel jammies. This Style Blogger, while sprawled on the couch watching It’s Complicated for the fifth time, can relate!

When her license with Dior expired, Carole started making sleepwear she would actually use and her business took off. I so adore when someone lives what they love and is successful at it.

It sounds like Costco’s luck to have her! And, today, so am I.