A Letter, For Father's Day 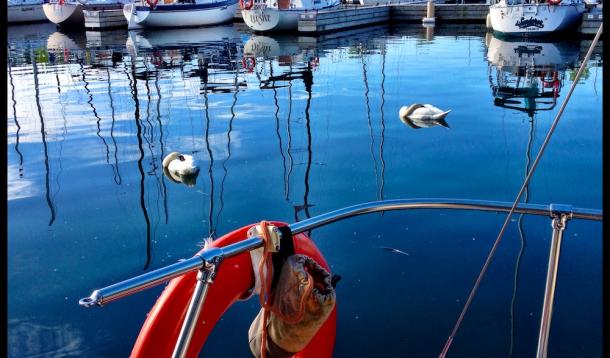 Nighttime on board. Younger Son is asleep in the bow. He fell asleep, like most nights, to his old man’s rehearsal time on the guitar. He told me his favourite songs and why. "Angel of Montgomery" is #1 for what the hell kind of person, goes to work in the morning in the 3rd verse. He really likes to sell the hell part when he sings it, borrows a tinge of Ozzy Osbourne actually. His head upside down and backwards, he throws his mouth back at a make-believe mic. His eyes are closed hard. If we painted black stars around his eyes and dripped fake blood from his mouth, you would think it normal. He’s an entertainer this kid.

Today was the best Father’s Day in the decade that I’ve been practicing. (They haven’t always been enjoyable, actually. Toxic relationships run tension-rich on the special parent days.) It began with solo coffee topside, followed by the regular and glorious b.m. Younger Son woke first, as always, and we checked out the swans sleeping off the stern. Older Son woke as we were pulling off the dock to go for our first sail. Nicholas is 16 years old with an eye on sailing for Canada in the Olympics. He took us out. Passionate, knowledgeable, and happy to answer my questions—of which there were many—he was the perfect Captain. The boys each took turns with the tiller, but mostly they wrestled the crap out of one another in the berth. Moving along out there I felt as I did flying airplanes.

Back on the dock, I set to chores while the boys played baseball and house with other boat kids. I drew them a chalk hopscotch and every person who walked past the boat hopped, one leg and two, through the boxes. The kids would stare at the intruders, half impressed with adults doing kid stuff, half miffed their shit was being used without permission.

Lay Lady Lay came across with a Daddy Day care package. Tahini and Oat breakfast cookies, yogourt, berries, and chocolate. We rode the bikes over to the pirate ship. Older Son played soccer, Younger Son played Ahoy, Matey! and Lay Lady Lay and I got a chance to catch up. We have a process that gets our work, difficult relationships, and kids discussed early, followed by an ease into time together. We are good at it.

We took the 445 back to the city to drop Older Son for a family dinner, then tootled over to Lay Lady Lay’s. Younger Son hung with her and her boy while I ran a school bag up to Older Son’s mother’s house. Sometimes it’s easiest to take the bag over.

I returned to group puzzling on a cow-skin rug. The African savannah with elephants and hawks and giraffes. Younger Son found the missing last piece. His victory was a big one.

I wrapped him in a blanket, put him in the trailer, and we made the return tender with a 6-minute cushion. Punctuality, driven into me by a father who was anything but, serves me well with ferries and tenders. Much stress in people’s lives here around catching boats.

Older Son called as we arrived back on board. To tell me he loved me. My boys are free and demonstrative with their love and I am proud of that fact.

Younger Son straight to bed with guitar. "Angel of Montgomery," "Henry Lee," "Blunderbuss"—in that order. I didn’t recognize the lyric he cited as reason for loving Blunderbuss. Something evocative, bluesy, and sexy no doubt.

Thought of you and ZR many times today, my dear dear friend and his firstborn. I tip my hat to you K-Harm. Happy Father’s Day. It’s already hard to believe you didn’t have a kid before this. Have you always had her?

I should go. Gonna go topside and put the sail cover on. Gaaawwwwd I love chores. My neck is fused, by the way, from cracking it on the roof of the boat hard enough to knock me out Friday. Really, really hurt and now I can’t turn it without moving my whole body. If you liked this, you might also like "Divorce Man And Daddy D-Bag" and "The Right Time Is The Write Time."