Christella Morris: Tech This Out

Don't Get Fooled By This Costly Prank

How trolls are making fools of us offline, too! 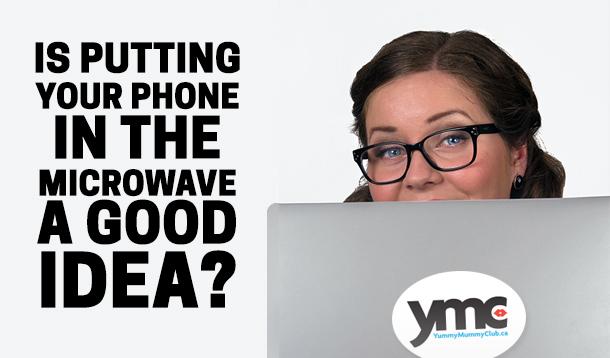 In case you were wondering, Internet, NO you can NOT charge your iPhone (or any other device, for that matter) using a microwave.

Recently the lovely folks down at 4Chan decided to play a not-so-humourous prank on internet and social media users by creating a fake ad that promotes the new iOS8 technology feature, the "wave." Using fake videos and advertisements designed to mimic the clean look of Apple's marketing go-to, the lovely internet trolls left a pile of angry iPhone owners in their wake. While most of us rolled our eyes at this make-believe so-called technology, a few of the more gullible (see: non-technical) individuals immediately plopped their iPhones into their microwaves and watched as, instead of charging the phone like the ad states, their brand-spanking-new devices were fried (along with their dignity, I'd imagine.) 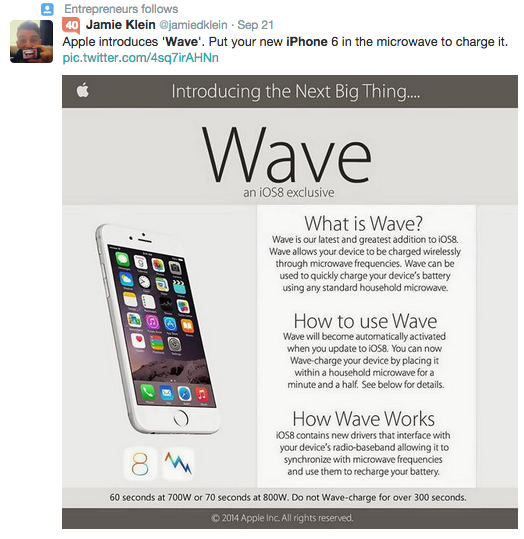 While some twitter users were sending out tweets including the now-infamous fake ad... 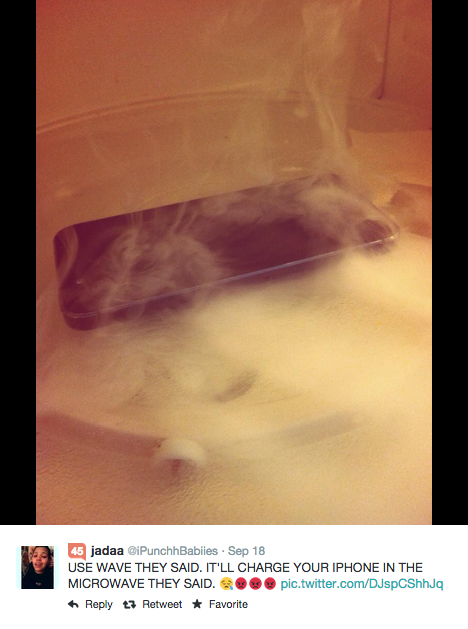 ... others were tweeting about their less-than-stellar results.

How Do We Know If Its Real?

It seems like lately more and more of these fake-yet-somewhat-convincing hoaxes are popping up, duping perfectly sane people into doing incredibly insane things. Here's a few tricks to TRIPLE-check that something is real before you start popping your devices into your closest microwave:

1. Go straight to the source! - Before you share, before you post, before you pop your brand-new iPhone into your freezer, hit up the company's website to see if you can find any trace of the information that's being shared around. If Apple had come up with the wave technology, don't you think that would've been plastered all over their website? Discussed at the keynote, perhaps?

2. SNOPES or bust! - Your best resource for sniffing out a fake story, technology hoax or whatever is to bookmark Snopes.com and check it... often. While sites like 4chan may be trying to ruin the internet for everyone, sites like Snopes are doing their best to keep us all informed about what is, and more importantly isn't true when it comes to internet fads.

3. Stop, Drop and Troll! - If something sounds too good to be true, it probably is! Whether it's coming to you by email, through your Facebook feed or on your Twitter account, unfortunately things that seem totally legit can be an underhanded attempt at a troll. If you're really unsure as to whether or not what you're reading is valid, take a lifeline and ask a friend. Once you DO find out something isn't real, do your buddies a favour and let them know, too! You might be saving them from sticking their shiny new device in a kitchen appliance, after all.

3 Easy Ways To Back Up Your Files Today

Breaking Bullies: Does Your Family Have A Cyber-Bully Plan? - See more at: http://www.yummymummyclub.ca/search/node/christella?page=1#sthash.qzESzgP5.dpuf

Breaking Bullies: Does Your Family Have A Cyber-Bully Plan?

Christella Morris: Tech This Out Don't Get Fooled By This Costly Prank

Christella Morris: Tech This Out New Tech On The Block: Should You Get The Three Cents App?

Christella Morris: Tech This Out Is SuperBetter The Next Super App?