Christella Morris: Tech This Out

Breaking Bullies: Does Your Family Have A Cyber-Bully Plan?

Want to protect your kids against online harassment, threats and more? Here’s one tech nerd’s advice. 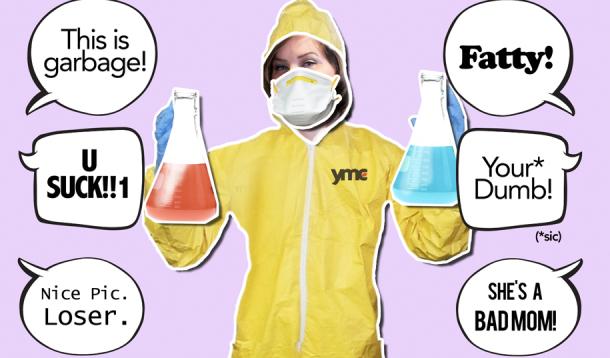 When you live your life online, which most of us do these days, you realize that everything is just made up of words. Words on blogs, flying past you on news feeds and in instant messages. After a while those words seem to lose their power, their attachment to reality. It becomes easier and easier to say what you think — even if you probably shouldn’t.

Bullies have found new weapons in their words on the web, which can make it quite the scary place. Kids aren’t using their words, pictures, and technology the same way we did not so long ago. It isn’t a resource for communicating but the hub for it. The bullying happens less and less on the playground and more at your desk, in the comfort of your own home. The attacks are made silently and they just keep coming. As an adult that kind of stress is toxic, but as a kid it could be debilitating.

But here’s the thing: It doesn’t have to be. It’s about teaching your kids to rise above, to ask for help and knowing what to do when they do. Easier said than done, right?

Of course, but it can and should be done.

And how do I know this? Because I’ve been bullied, recently even, and I realized that the getting rid of someone harassing you online is hard won, but not impossible. I also realized that maybe we’re not all teaching our kids some basic tools that adults use to cope with these situations. Responses that come natural to us are being intercepted by hormones. Maybe if we make a plan for diffusing these situations, like we would if the house caught fire or a stranger approached them.

Here are the best pieces of advice I can give you to help your kids (or yourself) cope with being harassed online:

Most adults know the fastest way to calm a situation is to stop and take a second to see it from all sides. Instantly reacting to something rarely ends up well. Teenagers, on the other hand, tend to freak first and ask questions later.

Homework: When talking with your kids about online harassment, make sure you reinforce how important it is to stop before they react. Let them know that if they are feeling bullied, put down, or pressured they should talk to you and come up with a plan. Remind them you will always be there to support them, too.

Everybody has a limit, but until that peak level of frustration is reached the best thing you can do in any volatile situation is not say a thing. Most bullies will spend the time you give them making themselves look worse anyway.

Homework: Show your kids examples of people who look stupid before they think about what they’re posting online. Talk about situations where other kids they know have been bullied or been bullies.

Although we always hope harassment won’t lead to going to the authorities, having the proof just in case that need arises is always the best policy. You don’t need to save every conversation ever had, but if things start feeling uneasy taking a screenshot doesn’t hurt. You can always delete it later, right?

Homework: Know your rights. Do a little research and figure out what people can get away with saying to you online and what is breaking the law.

Some kids just want to know there is someone there for them always, so be there. You don’t need to walk into the principals office terminator-style, but make it very clear to your child that you are supporting them and what they want at that time. Show anyone involved, even the bully themselves, the utmost respect. You don’t have to like them, but you do have to tolerate them.

Homework: Conduct an experiment by trying to make two negative magnets stick together. Remind your kid (and yourself) that having a negative response to a negative attitude will never end the situation positively.

5) Get a nice whip for the high road, it’s gonna be a while.

Taking the high road is never a good time. Although we know what the responsible thing to do is, doing it is rarely easy. The process is long and hard and when you finally do win, you have to resist every urge you have to stick your thumbs in your ears and say “Na Na Na boo boo!”

Homework: Take up a hobby with your kid to spend time together and help keep their mind off stressful situations.

Obviously not all bullies can be taken down, especially online. The best thing you can do for your children now to protect them from dealing with this stuff later is to talk to them about online safety. Oh! Show them where the “off” button on the computer is, too! That one will really come in handy!

Have another great tip for breaking bullies? Share them with me in the comments!

Looking for more info on bullying? Here are six books to help you talk to your kids about bullying and tips on when to be a tattle-tale parent.

Christella Morris: Tech This Out Don't Get Fooled By This Costly Prank

Christella Morris: Tech This Out Is SuperBetter The Next Super App?

Christella Morris: Tech This Out TECH SUPPORT: Advice On Starting A Teen Blog

Christella Morris: Tech This Out New Tech On The Block: Should You Get The Three Cents App?

Christella Morris: Tech This Out How Tech Can Help You Be Positive, Grow, Learn: A Series