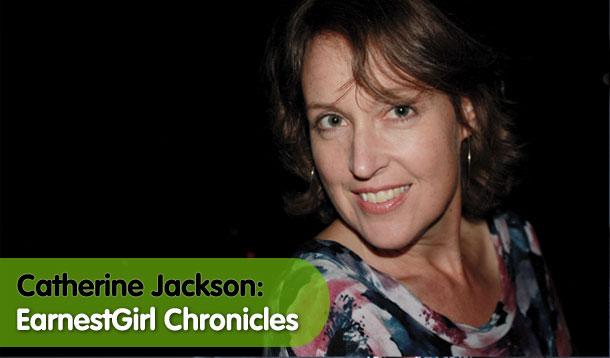 There are certain things which seem like a good idea at the time, but which are, in fact or in the clear light of day, not a good idea at all. For example:

Yogurt drinks or milk shakes of any sort for the children in the back seat no matter how long the road trip, how old the children, or how high pitched the whining.

I speak from experience for each and every one of these (luckily, my wallet was downstairs and my abdominal muscles too flaccid to get me off the couch so though the ab sculptor was seriously considered, it was not purchased) and for the most part, I’ve learned to ride out the good-idea-paroxysms. The bathroom mirror haircut though, is a recurring issue.

Inevitably, there comes a night when I confront myself in the bathroom mirror, and the only logical next move is to reach for the scissors. These nights usually follow the kind of day that leaves my reflection looking dishevelled and put upon and decidedly unglamorous. This is not strictly a motherhood thing. This has occurred since high school. In that artificially lit emotional moment I am absolutely certain that when the layers of my hair in the front (or the back, sides, top) are a little shorter (shaggier, layered, feathered, blunt) tomorrow will be better. I will be better.

A petite plainly spoken hairdresser may have finally cured me. I recently curbed the impulse to reach for the scissors and went to bed instead. The next day I took myself off to a proper salon, still struggling a little against the certainty that a judicious bathroom hack job would be a really good idea, but sitting in the salon with tasteful zen-esque floral arrangements and pretty glossy magazines strewn about with pretty glossy women looking calm and under control, convinced me of the wisdom of my decision. The miasma of styling products in the air may also have contributed to my delusion, because when the stylist consulted with me about what I wanted to do that day she refused.

Refused!?! I did not understand.

I was still moving my hands around my head cheerfully describing a “casual, chic, choppy growing-it-out effect” when the stylist cut me off with a curt shake of her sleek bob. “If you want to grow it out you have to grow it out.” She looked at me and waited for her words to penetrate. Clearly, I was still too deep in my good idea.

She tried again, speaking more slowly this time: “If I cut your hair today, in six weeks you will be back trying to manage another awkward stage.”

My hands fell helplessly into my gowned lap. “So….not cut it?”

“Not at all.” Then she smiled, a little sternly I thought.

I went home and hid the nail scissors.