A Cautionary Tale In Reverse 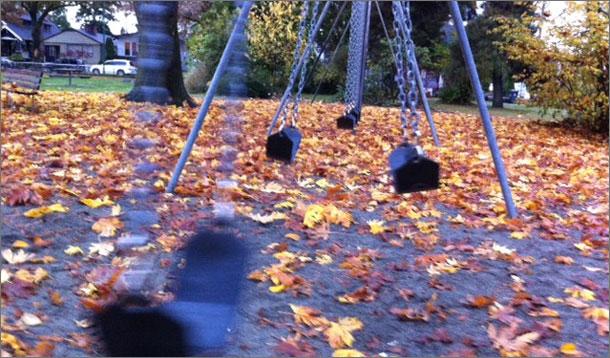 In the fresh bloom of the pre-school years, I agreed to become a member of the Board. The school was everything early education should be: they played music, hatched butterflies, went on small expeditions, little hands in little hands, a long caterpillar of wee ones in boots and coats undulating slowly along, noticing every leaf and stone. I particularly loved that there was play time, rain or shine, in a quaint outside sandbox-style area where the kids dug elaborate castles and had to figure out how to take turns on the little wooden-stepped metal slide without resorting to elbowing and raised voices.

What stunned me was that working on a board with other parents for such a good cause often resulted in elbowing and raised voices, never more so than when we needed to build a new playground. The lengthy discussions, the hoops of paperwork, and the red tape of potentially litigious safety requirements was astounding. More than once I wanted to use my “outside voice” during a meeting. But I understood. The good, patient, loving teachers running the school could not be held potentially liable for little children hurting themselves on the equipment. We got the right signatures, inspections, and permits. A new playground was indeed built with appropriate fall-cushioning materials, plenty of sturdy structures, and a cautionary “Unsupervised, Play at your own risk” sign was installed to allow for all non-school-related eventualities. When it was all over I fully expected a choir of angels to come and sing as the first precious child’s tush scooted harmlessly down the age-appropriate and correctly installed plastic slide.

A new sign has sprung up in the park near my house: 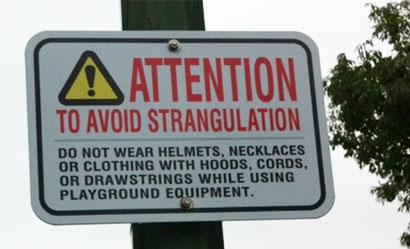 Thanks to my pre-school board membership I am fully aware of the machinations behind that sign. I fervently hope that no particular incident precipitated such a warning. Nevertheless, I fear that signs like this one are an indicator that we have lost touch with something fundamental about our children’s experience of play.

Into every childhood there must fall some skinned knees. Some bumps and bruises and yes, maybe even some crutches. The “be carefuls” I hear in the park make my heart sink a bit. When we set our little ones down in the sand, should we check for choking hazards and warn them against grit in their eyes or should we should hand them a shovel and tell them to dig to Middle Earth? Is that sign for us, for the kids, or to cover a city official’s legal exposure? Remember climbing actual trees? Or swinging arm over arm in an unbroken sway of gravity-defying momentum across the monkey bars, then executing a flying leap off the end and sticking the landing just right? Those early playground thrills of accomplishment are rites of passage just as surely as riding a bike is a milestone of childhood.

There was a backyard swing set that was popular when I was a child. It was made of metal with green, white and red candy cane coloured paint that flaked away after only a few weeks in the rugged backyard elements. When I swung hard enough the whole thing would creak perilously and lift a little off the ground. It was not safe by any of today’s standards, and I really don’t want to think about what that paint was made of, but I spent long, happy afternoons swinging, crescent moon calluses on the palms of my hands turning rust-colored from the chains, and I survived. No one asked me if I was wearing play-appropriate clothing. In fact, the swing set was doubtless purchased so that no adult would have to have much to do with me at all for hours on end.

We are wiser now. We know that paint should not contain poisons, that idiot mittens are ill-advised when learning to ride a bike, and that helmets are mandatory. Of course our children should have their shoelaces tied when they head out to play, but when they fall over their own feet one too many times they eventually learn to tie good knots. I am glad our schools and communities spend time and tax dollars considering the safety of all of our children, and I am not suggesting that we should throw caution to the wind. I just think the wind also makes for rosy cheeks.