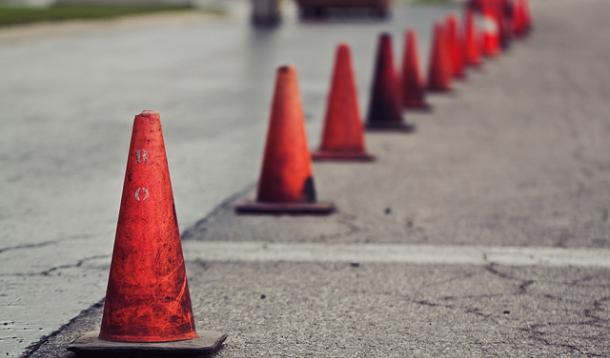 We were driving on a two-lane coastal highway after having dinner at a burger place in town. Hoping to savour one of the last lingering summertime evenings before school’s inflexible arrival we skipped dessert at the restaurant because we wanted to go back and make a fire to roast marshmallows for s’mores.

I hadn’t driven very far when I saw flashing lights and a guy in a yellow construction vest in the road.  A few cars were pulled over haphazardly on the shoulder. My foot flexed, then moved cautiously to the brake. He signaled me forward with an orange glowing wand. Drunk driving check, I wondered? It was a long weekend after all. And I had noticed an ambulance not long ago. Also a helicopter. Suddenly I was wary, mother-instincts alert like a bear’s muzzle lifted to the breeze.

“There has been an accident up the road. A head-on collision.”

“You don’t.” He answered, stepping back from my rolled-down window. “I was told two hours. At least.”

So we waited. Evening dropped down like a shawl across the road. A large orange sign appeared: “Accident Scene.” Pylons now stood sentinel. Another reflective-vested person came to wave cars over and manage the knots of people on the road. She didn’t want to be standing there in the damp chilly night any more than we did. She told me her son had just come home from camp when she got the call. But she was there, doing her job. Creating a safe buffer. Not far down the road there were people struggling to save lives, or to live. I tried hard not to think too much about what might be happening up there in the dark.

Mostly people were good, patient, and generous with each other. On one of the cars by the side of the road ‘Just Married’ was painted across the back windscreen. Several people had broken out camping gear; some were heading down to the beach to set up around bonfires. Another family traveling with a thoroughly long weekend loaded truck lent us a flashlight for the wait. I watched a mother and father by the side of the road get their crying and confused but mostly co-operative kids ready to go to bed in their vehicle.  There was also an angry woman venting about how her weekend was being ruined. A few more people complained bitterly to the patient woman in the reflective vest, some becoming increasingly incensed about a lack of information as the hours wore on. More than a few seemed to be suffering from a serious case of compassion-deficit.

We traveled back and forth from the car to hub of the roadblock. From silent patience to restless waiting to “Mum? Let’s go try to find out if they know how long now.” I knew everything about this was registering quietly but acutely.

Eventually, we were told forensics were on the scene trying to ascertain what had happened. After that the road would have to be cleared.

How long does it take to measure accountability? Is it even possible? Anyone who has lost someone to an accident has faced this question and more likely than not, felt like the woman weighing the scales of justice: blindfolded.

Midnight approached. The moon was high and full and bright. “A blue moon,” someone at one of the bonfires had reminded us. We got back in the car and I answered the “what will we do” question with honesty: we would wait. All night if that is what it took. We would tell stories in the dark. Cuddle the dog who was curled in silent patience on the back seat. We shook our heads about the angry woman. What did a “ruined” weekend compare to what was going on out there where the lights were still flashing even after the second rescue helicopter had lifted off? The cross people in the road were an object lesson: anger, blame, impatience, and lost tempers do little to mitigate problems, small or large. There are things we simply cannot control.

How we react in moments like these informs the way our children in their turn will cope. Of that my instincts were absolutely certain.

Eventually, the pylons were lifted away. We were told we could drive on. I held the wheel more securely than before, rolled the window down a crack even though I was chilled and shaking a little. My headlights swept the now quiet strip of rural highway, illuminating the “Eggs For Sale” stand we had passed earlier—“Sold Out” was still posted over the pretty little vintage roadside fridge. The impervious road curved away beyond my beams into total darkness. There was no visible sign of what had transpired other than a sparse string of car lights driving the careful speed limit.

Sometimes what we call a reality check is really a gratitude check. I offered up mine like beads on a rosary with each yellow line that slipped silently past my tires.