A Case Study On Names 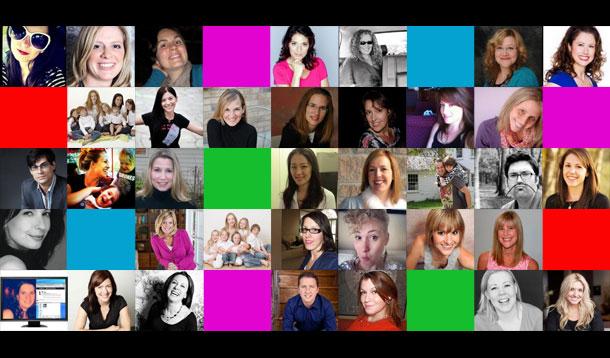 After having taken a close look at the recent release of the Top Baby Names of 2011, I had some fun doing a little bit of research about the names of the Yummy Mummy Club Bloggers. Below are the most popular names among us—Jennifer, Candace, Sarah, Julie, and Kat—followed by the remaining names, in alphabetical order.

At Blissdom Canada last year, out of 300 women, we counted 19 Jennifers among us. It really was the name of our generation.

Data: Kat has not been recorded among the Top 1000 baby names over the last 100 years. This is on account of it being a short-form of several names, as is the case with our Kats. Kat Inokai is Katalin (Hungarian) and Kat Armstrong is Katrina (Greek).

Famous People: Kat Deeley is the host of So You Think You Can Dance, and other than my two fellow YMC Bloggers, she's the one who comes to mind.

Famous People: Julie Andrews, Jully Black. Also worth noting is Julie Cole, one of the four founders of Mabels Labels.

Famous People: For me, the name Amy always makes me think of half of my favourite singer/songwriter duo—The Indigo Girls' Amy Ray.

Famous People: Of course, this name makes me think of Neil Diamond's "Sweet Caroline." Sing it with me—bah, bah, bah.

Fun Facts: The name may also have been derived from Hecate, the Greek Goddess of Magic. Catherine is the name of several queens and saints, including Catherine The Great and three of Henry the VIII's six wives. Modern day famous Catherines include Catherine Zeta-Jones and Katherine Hepburn. Not bad, eh?

Fun Facts: Fun facts for this one were hard to find, so I asked Consuelo how she got her name.

"The week before my mom had me, she was watching a movie on TV about a princess in Spain—her name was Consuelo. No one in my family had ever heard of that name—not traditional first born Italian name for 1973. Then years later, when we were cleaning out my grandmother's attic, my mom found an old shoe box with old family photos. On the back of one of the old B&W pictures, there was a woman standing in a field. On the back of the photo it said 'Consuelo.' So, I had a great-great-cousin who was named Consuelo!"

Meaning: God is my judge

Fun Facts: Elton John's song, "Daniel," was written in 1973 by Elton John and his writing partner, Bernie Taupin. It went to #2 on the pop charts and #1 on the adult contemporary charts. It is one of my favourite songs. Also, I went to summer camp with no less than six Daniels. We called them each by their last names.

Meaning: God is my judge

Origin: Many (see trivia below)

Meaning: Many (see trivia below)

Meaning: To Strive, Excel, or Rival

Meaning: Ever Powerful, Ruler of the People

Famous People: As per the above meaning, Erica Ehm—famous as Canada's first female VJ on MuchMusic—is the creator and publisher of Yummy Mummy Club.

Meaning: God's Able-bodied One or Hero of God

Famous People: Whenever I hear this name, I always think of Peter Gabriel!

Fun Facts: This is one of those names that we often see with varied spellings, including Krista, Christa, and Krysta.

Data: Sorry, Loukia, according to the US Social Security Adminstration, Loukia has never cracked the Top 1000 baby names.

Meaning: from the male Loukas, meaning "from Loukiana"—an Italian region. Also for Luke, one of the Evangelists.

Fun Facts: When you Google "Loukia," our very own Loukia—@MrsLouLou—comes up on the first page.

Origin: Many (see trivia below)

Meaning: Many (see trivia below)

Fun Facts: In Hindu philosophy, Maya means "Illusion"; in Hebrew it's short for "Ma-ayan," meaning "brook"; in Persian it means "generous"; in an Arabian or Indo-Pak context, it means "honourable matriarch"; in Greek mythology, Maya was the mother of Hermes. When spelled with a 'J,' it is of European descent. This is only a selection of the meanings and origins of the name Maya.

Meaning: Star of the Sea

Trivia: Maureen O'Sullivan was Jane to Tarzan in 6 Tarzan movies between 1932 and 1942. Maureen from now on, Me Candace, you Jane.

Meaning: Birthday, as in the Birth day of Christ

Meaning: Fertile Plain, from the Bible—refers to the flat land at the foot of Mount Carmel.

Famous People: Sharon Stone and Sharon Osborne (if you listen to the voice in your head right now, you can hear Ozzie bellowing for her).

Fun Facts: The phrase "Suzy Homemaker" has its roots in a line of functional, battery-run doll accessories, from the mid 1960s, that included an oven, vacuum cleaner, washing machine, blender, and hairdryer. The term became so popular that it is now used to describe the stereotypical housewife. The Suzy Homemaker Doll was second only to Barbie in popularity, in the late 1960s and early 1970s.

Fun Facts: Our Trina is a sex coach and sexologist, and at the moment, I'm amused to learn that her name means purity. In the words of Alanis Morissette, "Isn't it ironic? Don't you think? A little too ironic. Yeah, I really do think."

Fun Facts: Before I met Wanda, I would have referenced the movie A Fish Called Wanda. Now, seeing the meaning of her name, I think of her wandering the aisles of the bookstore, in search of the next great book to read, recommend, and discuss.

So, there you have it. To every name there is data, origin, meaning, and stories. I hope that I might have shared something new. If y'all have anything to add, I'd love to hear it.

Candace Alper: Name Dropping What Your Baby's Name Says About You