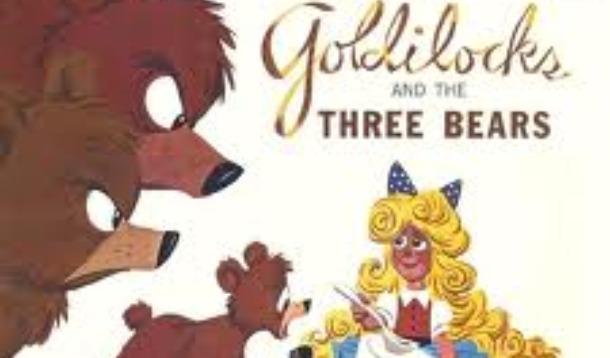 A survey of 2,000 UK parents found that two-thirds refuse to read several famous fairy tales to their kids because they’re too scary.

These are the 10 fairy tales that have been banned by the most parents.

2. Jack and the Beanstalk – Deemed too ‘unrealistic.’

4. Little Red Riding Hood – Deemed unsuitable by parents who must explain a girl’s grandmother has been eaten by a wolf.

5. Snow White and the Seven Dwarves – The term ‘dwarves’ was found to be inappropriate.

6. Cinderella – Story about a young girl doing all the housework was considered outdated.

7. Rapunzel – Parents were worried about the focus on a young girl being kidnapped.

9. Goldilocks and the Three Bears – Parents say it sends the wrong messages about stealing.

Now I’ll admit my 4-year-old gets scared by the oddest things. Finding Nemo's sharks spook him. So do the characters in Monsters Inc, and The Princess and the Frog. Even the scene in Puss In Boots where Humpty Dumpty died had him in tears last night. When that happens, we take it as a teaching lesson to explain pretend and make-believe and story-telling.

But it’s not fairy tales are particularly scary that has them not a part of our night night routine, it’s because, um, well–they suck.

When it comes to bedtime for my kids, we go to the library and bring home dozens of fresh books each week. Stories about Skippy Jon Jones, and anything by Oliver Jeffers are routine in our house.

Now we do read some classics—aps For Sale makes my kids giggle. Dr Seuss‘s big book of classic tales will always have a space on the shelf, but some just don’t hold up. 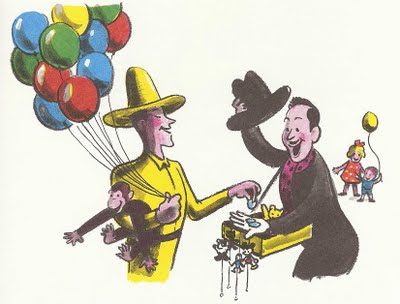 Try reading the beginning of the original Curious George. The part where the Man in the Yellow Hat goes to Africa and steals George to sell him to a zoo. The idea of a man having a monkey as a pet is hilarious, and Curious George makes a great mischievous foil for the behaviour of pre-schoolers, but the original tale just doesn’t hold up.

Same for Charlie Brown. We watched the halloween and Christmas specials with our kids this year and were shocked at how Charlie is bullied, how many times the word "stupid" or "blockhead" is used and how there are no repercussions. The Nazi imagery in Snoopy's dreams were a little much too take as well.

While the ancient messages of fairy tales and classic books may have been great for the era, I don't see a particular problem replacing them with modern stories working along the same moral themes.

Do you read any classics or fairy tales to your kids?

It Helps Families More Than Kids 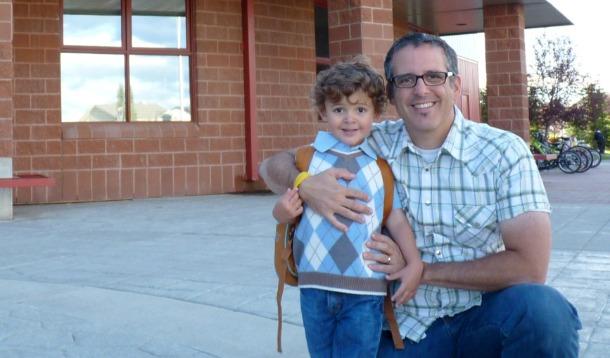 Alberta is one of a few Canadian Provinces that doesnt have mandatory full-day kindergarten across the board. The Premier had promised to bring it in for fall 2013, but that promise has been watered down.

Every one of Alberta’s littlest learners will be provided the option of full-day kindergarten someday, but the education minister says it’s unlikely the program will be made mandatory.

Thomas Lukaszuk said full-day programs will be phased in across the province starting in fall 2013, but facility and staffing issues could get in the way of it being made mandatory provincewide.

Speculation has suggested a $200-million price tag attached to the implementation of the program may have created a hurdle too high to clear.
[Metro]

Ontario started phasing in full-day kindergarten in 2010 and is now buckling under the weight of $500M in start up costs, and an estimated $1.5B annual bill once the roll out is complete.

Economist Don Drummond’s report will warn this week that without these types of tough measures, the province’s deficit could balloon to $30 billion in 2017-18 — the year the government hopes to balance the books, he said.

The government will not, despite Drummond’s recommendation, drop full-day kindergarten, he said.
[Sun] Ontario won't chop the program because it gets vulnerable kids in the system earlier.

“We can’t afford not to do it,” argues Charles Pascal, the [Ontario] Premier’s early learning adviser. Twenty-eight per cent of kids who enter Grade 1 are “vulnerable,” meaning they arrive with learning, social or behavioural problems. Without an early learning boost, they’ll never catch up.
[Globe and Mail]

Kids who would otherwise be neglected instead of nurtured at home, have a chance to build some good habits. But it's not just the bottom rungs of our society that are helped, the middle ones benefit too.

No longer are we seeing single income families, where home-schooling for 5 years was easy and the norm. Dads are working, moms are working, and, in many cases, the children are finding them in daycare facilities starting at 11 mos old.

My son is 4. He's in "junior kindergarten" now for 5 half days a week. Last year, in preschool, his teacher said he was ready for full days. Of course he is, he was spending 6 hours a day at a daycare facility before we moved to Alberta. A daycare that was staffed by Early Childhood Educators that featured crafts, reading, circle time, songs, gross motor play, and more. It was school. At 11 months old.

So, by the age of 4, one would expect he's used to the system and able to handle the structure. Junior Kindergarten is not offered in the school system, private preschools exist, but those are still just a couple of half days a week. So we have sent him to a private school, at the cost of nearly $7,000 a year.

Next year, because there is no full day kindergarten in our area, he will have to attend the private school again. This time at a cost of nearly $10,000. Toss in the money we spent for the pre-school and you're looking at $20,000 over 3 years we spent on education for ages 3-5.

Full day kindergarten would have at least taken $10,000 out of that mix and allowed us to pay down our mortgage, or family debt—the sort of things the government needs Canadians to do to keep the economy healthy.

Still, not all are on board with full day kindergarten.

Margaret Wente of the Globe and Mail says the 'helping vulnerable kids' angle doesn't work. She cites a US program called "Head Start" that has spent $100B and achieved no greater good for kids by grade 1.

But the vulnerable kids is just a part of the equation, and even Wente acknowledges the greater good for the middle that full day kindergarten provides.

The benefits of early childhood education have been vastly overstated. It’s not a magic bullet. Which isn’t to say that all-day K has no value. It’s fabulous for working parents, and a whole lot cheaper than daycare. Mothers who might otherwise stay home may choose to work, and it creates extra jobs for teachers. But they aren’t the benefits we’ve been sold. And in a world of excruciatingly tough choices, that matters.
[Globe and Mail]

I'd like Alberta to institute the program province-wide, and quickly. I have a second son who turned 2 last month. Next January he'll be in pre-school. Fall 2013, he'll be in junior kindergarten and, if full-day kindergarten isn't installed by the fall of 2014, another $10,000 will fly out of our family budget because the government couldn't provide.

After originally posting this piece on my DadCAMP blog and my Facebook page, I received comments from a dear friend and my cousin against all day kindergarten. Both are very capable mothers who have chosen to stay home and raise their kids. They (and their children) are quite happy with that arrangement and have found the system not suiting their needs.

My bias is obvious—my wife and I are working parents and our son loves hanging with "his peeps" and we would like to have more of that without drowning in debt to make it happen.

What's your take on all-day kindergarten? What kind of school are your kids attending and how old were they when they started? 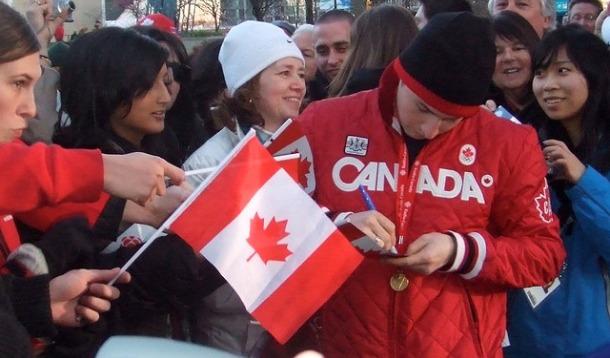 For many, today is Valentine's Day. A day reserved to overpay for flowers, scramble for restaurant reservations and rifle through the remnants of cards to show you care on this Hallmark holiday.

Let's put that aside. Show you care every day and let's celebrate something else on February 14th. Today is the anniversary of the first gold medal ever won on Canadian soil. The day Alex Bilodeau came from the shadows and made history.

He was the perfect one to do it. A humble, soft spoken guy with mad skills. A brother with challenges waiting at the bottom of the hill, a smile as wide as the flags that were waving in the crowd. It was a bump and jump run not even lasting 24 seconds, but with every knee pop, the pulse of the country quickened. Our collective breaths held in mid air before flips and twists were landed.

What happened next was even better. As the spotlight around Alex grew, he grew with it, but stayed grounded. During our 26 hours at the Vancouver Winter Olympics, we walked along Georgia Street after arriving. 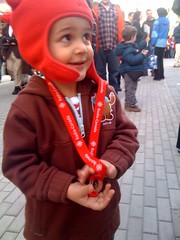 A crowd had formed outside the CBC building and I thought it was for Don Cherry. We crowded in close and saw it was for Alex Bilodeau. He did his interview and then signed autographs for the crowd.

As he was ushered away, he saw Zacharie and stopped. He toussled my son's hair, took the lanyard off around his neck and hooked it over Zacharie's head—Canada's gold medal winner had just ordained my son with a medal of his own. Sure, it's just a simple CBC lanyard, but for us it is pure gold.

Later that ski season, the team would come to Calgary for the nationals. I brought Z to meet Alex Bilodeau again and get a proper photo and thank him for shouldering the pride of a nation with grace and dignity.

Jenn Heil was also there. She was supposed to have been Canada's first. When you looked at the schedule of events, women's moguls finished before men's and Heil, a world champion, was supposed to be the darling of the games. But her moment didn't come that day, she settled for silver and the stage was set for Bilodeau.

Talking to them on that warm spring day on the steps of Canada Olympic Park, home to the 1988 Calgary Games, was a special moment. To share Olympic stories with two great athletes and even more remarkable people was a very special moment.

So, on this February 14th reach out to your fellow Canadians and wish them a Happy Alex Bilo-day.