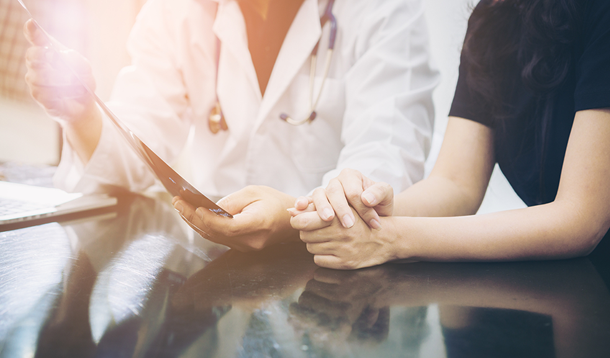 With a sheet draped over my lap, I anxiously wrung my hands and texted a friend while I waited in the colposcopy procedure room, naked from the waist down. Six months of doctor’s appointments, six months of stress and anxiety and uncertainty, and I was finally going to see and understand what the fresh hell was wrong with my cervix.

After a normal PAP result in November 2015, it’s no surprise my physician raised no alarm bells over the weird symptoms I’d started having in February 2016. Abnormal bleeding, overwhelming tiredness, and occasional cramping isn’t that unusual for a working mother with an IUD she assured me, and if it continued I should come back. But two years into my IUD, I'd never experience random spotting and certainly hadn't dealt with heavy bleeding. Still, she's a physician and I'm not so I listened.

I returned again in April as the symptoms worsened and I knew, deep in my gut, something more than IUD side-effects was at play. I went hoping she'd do a full pelvic exam, but instead she assured me - again - it was normal. I suggested removing the IUD, but she told me we should wait and see. Also, was I under a lot of stress? I was.

Work was busy, raising a kid alone is hard and I’d had such similar symptoms before, which resulted in a benign polyp being removed from my cervix in March 2014. I reminded her that I'd had a benign polyp, that I have a family history of cancers. I told her again exactly what was happening. I even brought in photos of my sheets, the toilet paper, and kept track of the "occurrences".

The symptoms continued and worsened over the coming weeks, so I made another appointment. Finally, she sent a referral for me to see a specialist and sent requests for diagnostic testing - blood work and ultrasound - on May 22, 2016. It was the third time in four months I’d visited her to ask for help. The referral took weeks and my symptoms didn’t go away. I returned to her office twice more and, on one occasion, considered visiting the emergency department at the nearest hospital while I cried, bleeding heavily on the floor of my shower, and my partner looked on - unsure as to what he could say or do to help.

When I finally saw the specialist, she told me I needed to visit the colposcopy clinic and that abnormal cells were present on my cervix. She told me I had a visible ectropion (aka cervical erosion) and that she was worried about abnormal cells present on my cervix. I’d spent the last five months convinced it was just another benign polyp, so when the letter from Cancer Care Nova Scotia arrived in the mail explaining next steps and who to talk to if I had questions, I was flattened. That letter made it all real. 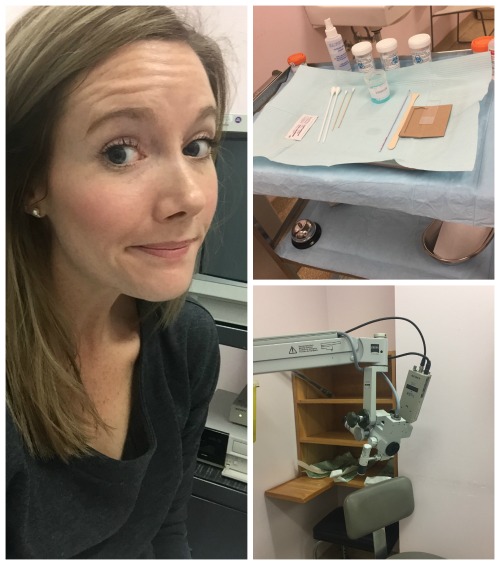 Fast forward another month to the colposcopy clinic, where I’d watch on an old TV screen as abnormal cells lit up like a Christmas tree as my physician dabbed vinegar along my cervix. (Side note: cervixes look weird, you guys.) I watched as a simple brush with a q-tip caused bleeding; I listened to my gynaecologist ask the nurse to prepare for biopsies. I tried to breathe through the discomfort as she pressed against my cervix; I asked that they turn off the screen so I didn’t have to watch the biopsy. I just couldn’t watch.

Two hours after arriving at the hospital, I left with a juice box, two cookies, the knowledge that I’d (ultimately) be OK and that we’d receive biopsy results in six weeks. I left knowing I’ll probably be in that very room again. I left finally knowing exactly what’s going on in there, but not knowing what the next step will be just yet.

Thankfully, I’m ahead of it and I had the “lady balls" to stand up and demand more of my physician. There was a time when the doctor’s word was gospel, and I wouldn’t have pushed for another answer - why would I? I certainly don’t have a medical degree. I'm not angry with my physician, though, because I trust that she was trusting her intuition in the same way that I had to trust mine.

What this experience has taught me is two-fold: Firstly, you’re not only the expert on your body but you’re the sole person responsible for taking care of it.

Secondly, you must advocate for yourself because no one is going to do it for you. It’s easy to feel intimidated when you’re talking to your physician, but that doesn’t mean you don’t have something important to say.

Go and get a PAP. Ask your doctor about that mole. Discuss the thing that keeps you up at night. Ask questions, demand answers, and make sure you understand your diagnosis. Don’t be afraid to ask for a second opinion.

RELATED: Heck, Yes! My Boys Will Be Getting the HPV Vaccine. Here’s Why.

Ashley MacInnis: The Frenzied Fashionista That Time I Got Mumps Even Though I Was Vaccinated