Or Dumb. Or Superficial. Or Other Ridiculous Assumptions. 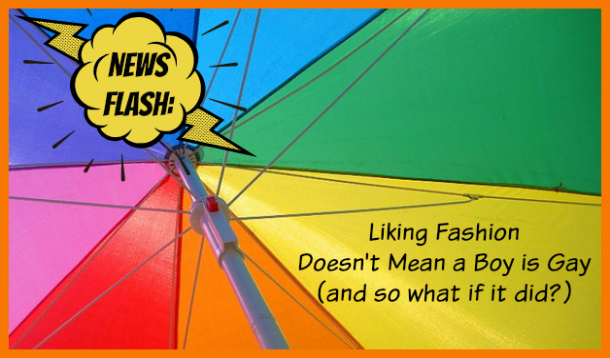 As the single mom of a preschool-aged boy, I think a lot about whether or not he has enough male influence in his life. Sure, there’s my brother and my dad, but F misses out on having a male in his life on a daily basis, but we make do as well as we can. Because he’s a little boy with a vivid imagination, and because he has a mother who encourages him to try new things and live out his creative, imaginative ideas, he occasionally slips his feet into my heels and clip-clops around the house singing Let It Go. And I love it.

But some people think I’m “making him gay." Enough so that they’ve felt it was necessary to verbalize their "concern."

There are oodles and oodles of ways this breaks my heart, the least of which being that “gay” is made to be a flaw in this context. The number of shits I'll give if my son tells me one day that he is gay: exactly zero. I love my son for who he is, not for who he chooses to love.

Sometimes F will ask me to paint his nails, or if he can wear some “pretty” (aka blush). And you know what? I let him wear the pretty. I give him pedicures. I scrub his cute little feet and I use clear, nail strengthening polishes on his finger and toenails for him. I let him use my clear lip balm. If he wants me to blow dry his hair, I do – not because I’m aiming to “make him gay,” but because it makes him feel special. And he deserves that.

His favourite colour is pink. He ooooohs and ahhhhs sometimes when I put my lipstick on. He's even pointed at dresses in magazines and exclaimed "I could totally  wear that," before bursting into giggles. He also plays with dinky cars and - when he's not pretending to be a princess - he pretends to be Lightning McQueen. It's called normal. Not gay. Not not gay. Just a normal kid, imitating his parent. 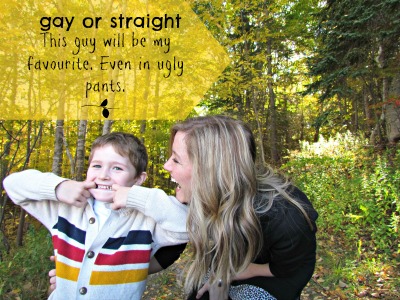 A colleague of mine once made a quip about “If you go for a manicure once in a while, it doesn’t mean you’re gay, right?” and then laughingly assured everyone that he would never get a manicure. Another piped up that you could totally tell Apple CEO Tim Cook was gay because he “has the body and style of a gay man." REALLY?

But, of course, well-dressed men being gay isn’t the only ridiculous myth associated with the world of fashion, beauty, and style.

Like how girls who enjoy shopping and pretty nail polish must be dumb.

Or girls who are heavier are “unhealthy.”

And then there’s the ridiculous idea that girls can’t play sports, or boys can’t do dance and all kinds of other ridiculous, untrue, unfair, stupid stereotypes and gender biases that we, as a society, really need to fight.

Fashion, beauty, and style are interests. For some, they might even be passions. And while I love fashion, I don’t love justifying my love for a great pair of shoes or the necessity to prove that I’m not an airhead because I’m blonde and sometimes wear four-inch heels.

Let’s not give fashion more credit than it deserves.

Was this post a little ranty? Woops! My most recent rant features a fashion brand that caters only to small sizes, perpetuating the idea that thinner is better. And you'll better understand my "rantiness" when you learn about the award Erica Ehm presented me with at BlissDom Canada.