Eating on a Budget: Your Emotional Cost

Week Two of The Hunger Games 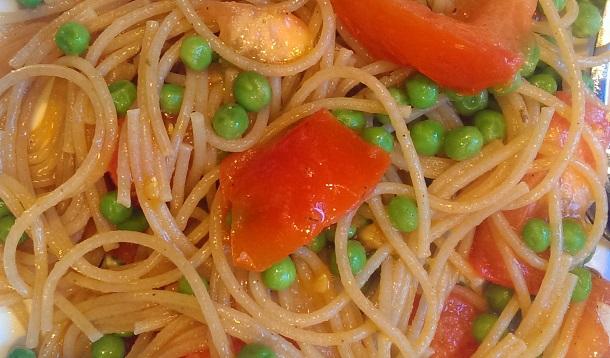 Week Two of the Hunger Games Challenge has us pretty firmly in stride. We stopped feeling so hungry all the time, our stomachs adjusted (mostly) to the change in diet, and the quality of food improved significantly after the second grocery trip. Kidlet has stopped giving us so much grief about the lacks of certain things and he appears to have filled his hollow leg. We had a bit of a breather on Sunday, too, as we were invited to a BBQ by friends and Mother-in-Law for Mother's Day.

Honestly, the best part about it was not having to cook. But the other nice thing about the upcoming Mother's Day was that a lot of meats went on sale. This was doubly good cause after being over by nearly $40 last week, this week's available cash was only $75.87. 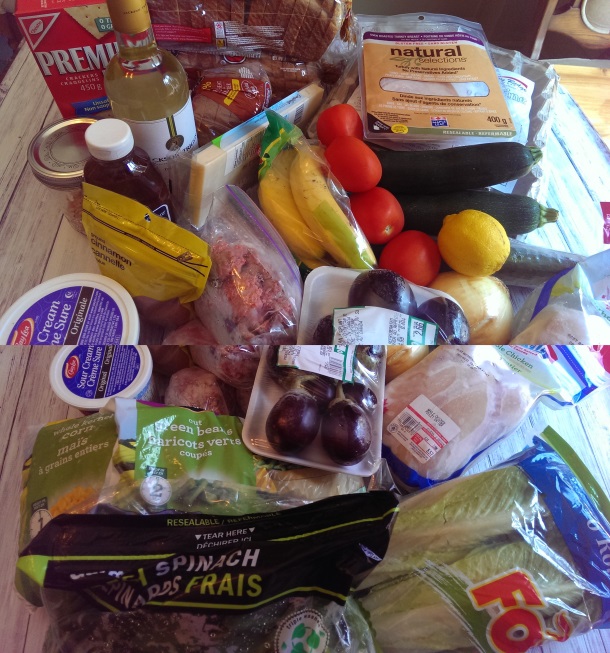 Since I had blown through the bananas and spinach, and also virtually all the bread and eggs, I trooped back to Costco with a friend to get more of all four items. We also split a package of romaine lettuce and a club pack of lunchmeat for the week. The other major grocery shopping excursion was to Food Basics, where ground beef and chicken were on sale; there was also a small wine shop inside that had white wine on clearance, which I couldn't resist since I love to cook with wine. Hubs happened to be near Sobeys one night and picked up the mozzarella. I split the couple pounds of ground beef I picked up into half pound packages and put them in the freezer for convenience.

Breakfasts remained the same, since none of us are big breakfast eaters: oatmeal for him, cereal and toast for kidlet, toast with Wowbutter more often than not for me. We had pancakes on Mother's Day, prepared by my husband, and kidlet also ate the leftovers of them throughout the week.

Lunches were a little more diverse this week: hubs finished off a couple days of egg salad (~$0.69 each); kidlet ate a couple days of Wowbutter & Jelly (~$0.65 each); and hubs and kidlet had turkey sandwiches (~$.80 each) made with two slices of lunchmeat (1/2 a serving of protein) lettuce, mayo, and mustard. Leftovers were taken a couple times (but mostly consumed by me). I sent them also with apples, bananas, carrots, cucumber, salad greens, and fruit cups. 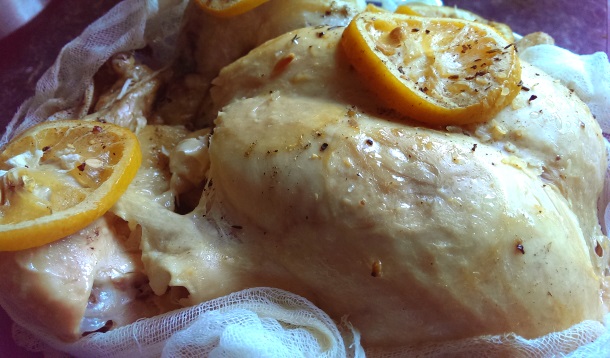 Friday, we celebrated a change in diet with tacos (~$1.10 each) using a half a pound of ground beef, cheddar, tomato, lettuce, sour cream, and the tortillas I had made, plus most of the taco seasoning mix I had purchased and a sprinkle of flour to help it to stick to the meat. Saturday, we had sandwiches and tried a cold vegan barley salad made with corn and roasted tomato, zucchini, and eggplant (~$.45 /serving), but I think I'm the only one who enjoyed it (and frankly I thought it was better hot). Sunday was Mother's Day -we had the mother-in-law's favourite food for lunch, hamburgers, and found we were too full to eat dinner. Monday was a delicious crockpot-roasted lemon chicken (recipe coming soon) with vegetables, rice, and a green salad. Tuesday we had whole wheat pasta again, this time with spinach, garlic, and leftover chicken (~$0.95 / serving). I also made stock with the vegetable peels I've been saving the last two weeks and the chicken carcass Tuesday, in the slow cooker. I've never used the slow cooker for stock before, but it turned out well (and incidentally, I've got a recipe for making vegan vegetable stock using vegetable peels, too). Tuesday's stock became Wednesday's chicken soup, fleshed out with lentils and frozen vegetables, plus the remainder of my carrots and celery. Hubs and I also enjoyed it with a side of grilled cheese, and kidlet ate scrambled eggs and spinach for supper. Thursday is frozen tortillas and the leftover chicken again, making quesadillas (~$1.05 each) with a side salad.

For dessert, I also made a half a batch (1 dozen) Crazy Cake cupcakes on the weekend using white sugar and apple cider vinegar instead of white (which worked out fine). At about .12 cents each, they're delicious, vegan, allergy-friendly, and best of all, they refrigerate well. Kidlet has been eating them all week. 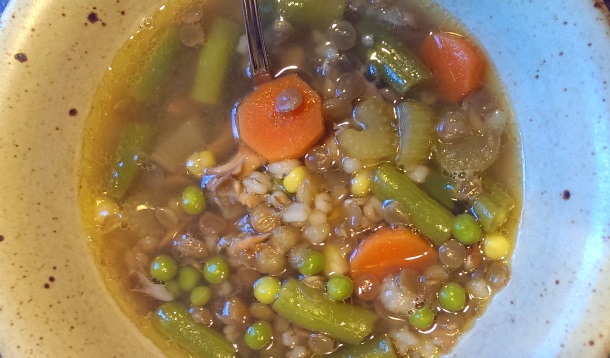 What's Gone and Where We Stand

Similar to last week, we've polished off all the bananas, spinach, and bread. In fact, very little remains of the two weeks of groceries and pantry items, leaving me kind of in the red again I also burned through a lot of the leftovers that we had from week one: the rice is gone, the cheddar is gone, the Cheerios, remainder of the 8 lbs of apples, the carrots, and the celery. I've polished a little over half of my olive oil off, about half my lentils, and my flour is pretty depleted. 3/4 of the Wowbutter is gone, and kidlet has also made extensive inroads on the apple sauce packages... currently only 12 remain of 36.

I've got some flour, and plenty of oats. I've still got 3.5 boxes of pasta. I've got about a half a litre of oil, 2 zucchini, a cucumber, an onion, and 2 tomatoes. There's 3/4 the bottle of wine, all the popcorn, still about half a bag of frozen peas and 3/4 of each bag of frozen corn and green beans. I do have quite a bit of meat: 10 porkchops, 1/2 lb of pork stewing meat, about 3/4 of the package of lunchmeat, 1.5 lbs of ground beef, and a few ounces of leftover chicken that I'll put in the freezer to consume at some point next week. We also barely touched the eggs this week - we have about 27 eggs left.

I will buy little in the way of meat next week, focusing on replenishing my vegetables and the depleted pantry items like rice.

Morale and Other Things

Hubs and I are having persistent minor digestive problems, mostly gas and heartburn; I think it may be that we are unused to lentils and barley in this quantity (things that we seldom ate before). We are having trouble with the food guide standards; often we are eating not because we are hungry but to try to meet requirements, and this isn't helping our gas and heartburn situation. Aside from this discomfort, morale-wise, things are looking up. The new groceries and the little luxuries like the crazy cake have gone a long way to cover the things we still lack.

Kidlet's binge-eating settled down at the beginning of this week, and he has professed a newfound love of Wowbutter (which he originally gave me huge pushback on). He's actually started avoiding eating many things - probably due to the fact that he has developed his first loose tooth. My son has asked me every day he had leftover pancakes to put syrup on next week's list. I will comply.

I've stopped obsessively tallying and measuring everything, as I feel that is unrealistic, but hubs and I find we are still hesitant to take seconds or cook much more than we need. We don't feel any longer like we will starve on this budget, but there is no feeling of "plenty" or like we can safely treat ourselves to food prepared outside the home. This plainly came to a head when hubs stopped at Tim Hortons to buy a bagel on his way to work on Saturday instead of eating oatmeal at home. He confessed later, and I realized that made me feel deprived and annoyed, especially since we were already over budget yet again. There are many foods that I would like to have but can't afford or justify. There are days I would like to not have to look in the fridge and ask "what can I make with what I have left?" 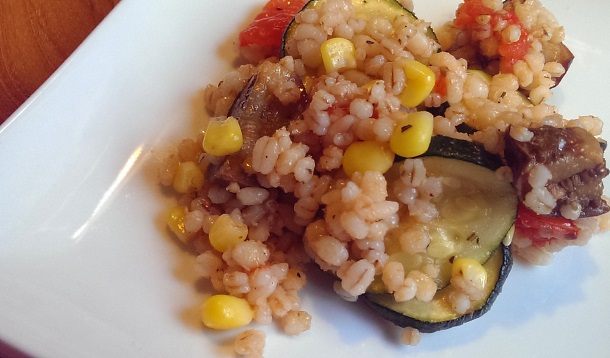 No major ones, at this time, although I wish I had overspent more to take advantage of the pre-Mother's Day sales. But with so much stuff in my freezer already, it wouldn't have been possible or practical. Hopefully the sales continue to be good to us.

I will be heading out of town briefly to visit my 92-year-old grandmother this weekend. Due to the circumstances, after consulting with Jeni, we've decided that the most practical solution is to briefly suspend the challenge and continue it into June for three days instead. (Ed. Note: I'm a softie: what can I say?) Friday, we'll make do with food we already have, and we'll go shopping on Tuesday instead of replenishing the groceries Thursday night.

For those of you who say "where's the challenge in eating on $5.50?" the challenge is mostly emotional. The challenge is trying to make sure we eat balanced diets, trying to ensure that we have enough when we know that there's a specific and finite amount of money money, trying to find the motivation to cook day after day, and trying to get ahead when there's so little extra money to work with and such limited resources (e.g. no garden or chest freezer). There's a significant amount of strategizing and planning effort that doesn't happen when you know, deep down, it's no big deal if you see a good sale on and spend an extra $50 this week, or if you have a stocked pantry to help float you.

I'm grateful to all of you who have been following this food challenge, providing us with your meal ideas and stories about your lives on such restricted budgets.

Week One "Hunger Games" Recap: In Short? IT SUCKED.

Could You Feed Your Family for $5.50 per Person Per Day?

I Fed My Family On a Budget & It Sucked

The Emotional Cost of Budget Eating

Budget Eating: You Won't Starve, But You'll Be Exhausted