I Fed My Family on a Budget & it SUCKED 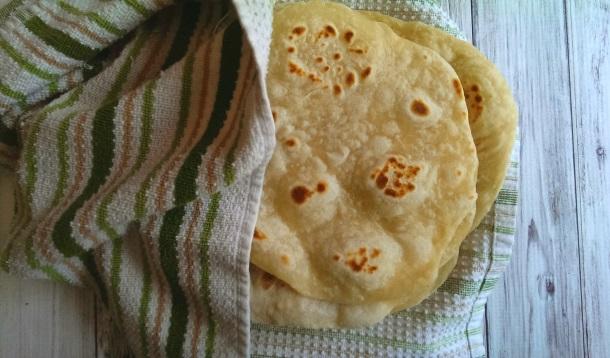 We're just at the end of week one, and it's been a bit of a rough week for us, in all honesty.  Morale was a bit low throughout the week as we tried to make do with things that weren't our usual fare and the discomfort that came with the sudden change to our diet, and it was compounded by the fact that my son appears to have just started stocking up for a growth spurt.

Before we started, I prepped for this challenge by getting to know the prices of most things I never paid too close attention to. I made a list of a lot of the stuff that we liked to buy, and then found an average price for them so that I would have some idea of about what price was good and fair without having to spend an hour calculating prices in the grocery store every trip. I also knew I was unlikely to be able to keep to budget this week, since my pantry would be completely empty except for salt and pepper. And I didn't. I was over by nearly $40, restocking the basics like oil, margarine, spices, flour, sugar, and vinegar.

I got really lucky; just days before the project kicked off, good sales began to kick in. Prices on fresh fruits and vegetables, which had me seriously worried at the start, began to decline. That gave me a lot of wiggle room that I might not have had if I had started this in April; in April, I would have been stuck with mostly canned and frozen fruits and vegetables.

Here's the breakdown of the grocery bill: 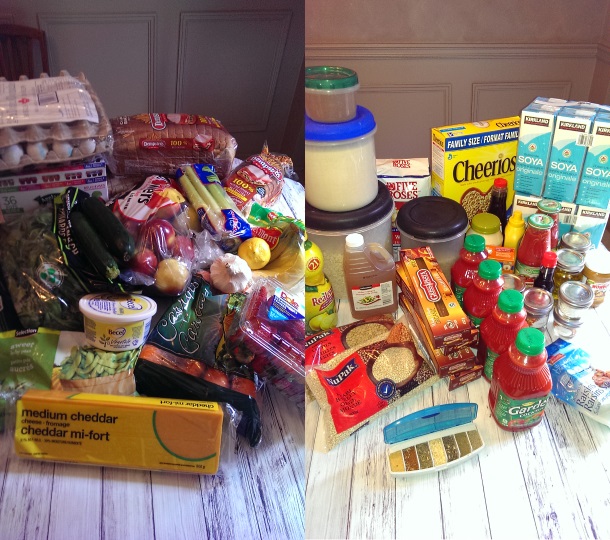 Mostly, I shopped at Costco and Food Basics. I also "bought" a few of my remaining perishables (and items I already had in excessive quantity, like olive oil) from before the challenge started at going prices so they wouldn't be wasted.

I butchered the pork loin I bought Thursday evening, after the shopping trip (and you can read about how to do it on FoodRetro) so I could make the slow-cooker pork stew the next day. It's a bit messy, but pretty easy and not that time consuming. 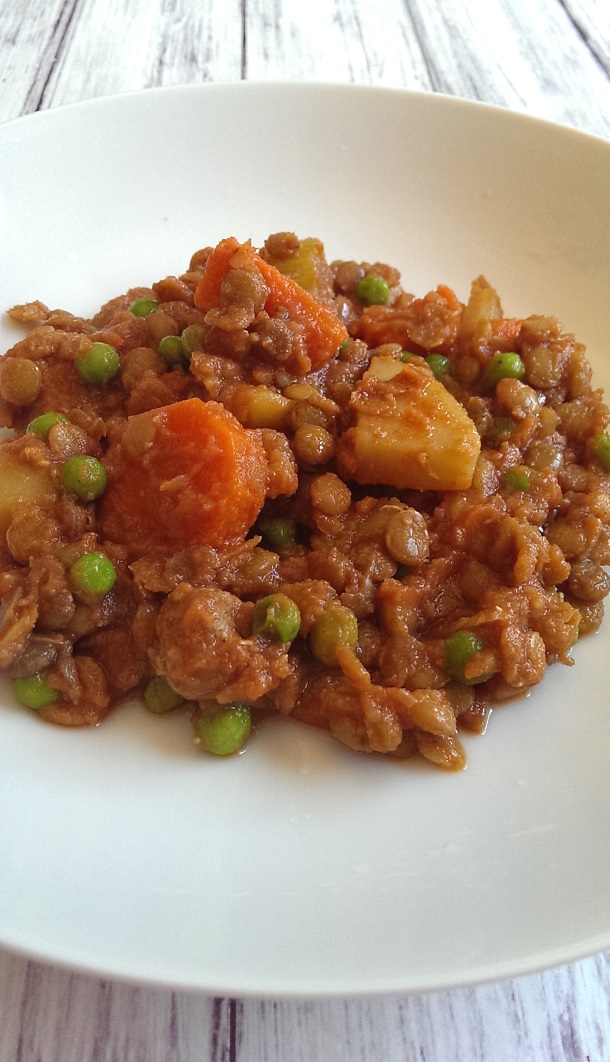 I spent a couple hours on the weekend and prepped ahead in the pantry for the month by making a single jar of Strawberry Jam (recipe coming) ($1.51) and about 12-14 half-cup servings of instant oatmeal ($2.37) for my husband, on Saturday. On Sunday, as I made lunch, I also made a dozen chocolate zucchini muffins ($2.02/doz.) and a dozen unleavened 10" flour tortillas ($1.94/doz). I should note I could have made the tortillas for about half that if I had spent an extra couple bucks for the 10kg sack of flour (something I regret).

Breakfasts were fairly simple: usually toast with or without Wowbutter for me, oatmeal for my husband, and cereal for my son. On Sunday, to adhere to tradition, I whipped up a double-batch of 1/4 cup-size pancakes (about 11 1/4 cup batter pancakes from scratch for $1.67), served with margarine and jam, and he ate them through the week as well.

Lunch options were poor this week, consisting of mostly leftovers, egg salad sandwiches ($0.69/ea), Wowbutter & strawberry jam sandwiches ($0.65/ea), grilled cheese ($0.35/ea), plus fruits and vegetables such as we had them. There was also a vegan lentil & barley stew (recipe NOT coming) which was neither very good nor very satisfying.

For dinner, we had slow-cooker pork and lentil stew (recipe coming) ($3.68/6 servings) which was very good; broiled pork chops served with rice, spinach and strawberries; fried rice with eggs and pork ($2.37/6 servings); and a slow-cooked pork roast on top of potatoes and a spinach salad (about $7 for the roast, but there was tons of leftovers). Tonight, after hitting the grocery store, kidlet had scrambled eggs and spinach; I dressed up a version of spaghetti and olive oil with some frozen peas and a newly-bought cubed, pan-roasted tomato.

What's gone and where we stand

As I write this at end of day, Thursday, I have about a third a loaf of bread left out of three. The spinach is gone. So are the potatoes, strawberries, and pears. I used up almost all my cinnamon making the oatmeal. The bananas were gone by Tuesday, and there's only 6 eggs left out of thirty. I've used up a quarter of my oil, one of my two zucchini, about a third of my Wowbutter, one of my Motts Cocktails, half of my carrots, and about half of my rice. So, while many things are out and running low, I've still got some food to see us through the next week, which is good, because I'm short $39.13 for next week. I have barely used some of the items, like the barley and pasta.

When I try to estimate where we stand for family budget every day, we're mostly running between $8 and $9.75. While this seems like we're doing super well, I have to keep in mind the reality that it took us virtually the entire week of eating in this price range to make up for the budget deficit I created. But given that I still have many things left over and most pantry goods, I'm cautiously optimistic that we'll be able to introduce some of the things my family misses most. I intend to bake crazy cake for my son this weekend, if nothing else. Even with the more expensive flour, I can produce a dozen cupcakes for $1.41, or about $.12 each.

Aside from being sick to death of pork, as I mentioned previously, morale has been kind of low. I've been trying to not obsessively calculate everything until I have a better idea of how much we eat and how cheaply we can do it. Husband and I are coping with our options, even if they are unexciting and the variety is poor. My son, however, is not coping as well with the changes. For the first three days, he was vocal and unhappy about the lack of certain items in our diet that we were precluded from buying because of price, like Oreos, his usual lunchmeat, and maple syrup for his pancakes. In fact, every meal for three days, he was unhappy about something that he couldn't have that he was used to eating, we fought a lot, and this brought a lot of stress to hubs and I.

I'm not proud about this, but on Sunday, after more than two full days of complaints and attitude from my son about his meal options, I cried. We explained that there was just "no more money right now" to him. Unsurprisingly, he didn't get it; six year-olds are not well-known for having a great financial acumen at the best of times. As I'm sure I'm not the first mom who has been put between this rock and hard place, I feel for the parents who have had to explain the facts of low-budget living to their child.

We've been adhering fairly well to the Canada Food Guide (with the exception of dairy, which sometimes we forget because dairy is not a part of our normal diet). We have to be good about adhering, though, because with the minimums I listed in the rules, sometimes I'm still barely skating by with about 1200 calories (by the estimate of Myfitnesspal). Fruits and vegetables are not super-high, calorically, and I believe this is the trap that a lot of low-income people fall into: healthy, or plenty?

Kidlet is fine, hubs says he's fine, but I find I'm a little hungry some days, and I have to graze more frequently. We still have leeway in the daily budget - even though kidlet is eating like a horse - so I don't feel guilty about having another piece of toast or an extra piece of fruit. Still, knowing that we're limited is enough to keep me mindful of making it through the month.

It's oppressive, worrying about food all the time, and I've lost a pound.

I regret my decision to buy a whole pork loin without having someone to split the cost and butchering of it. It was a good price, but it meant that our only protein options for the week were lentils, Wowbutter, eggs and pork, and we are all sick to death of pork and lentils right now. The good (and bad) news is that I still have quite a bit of pork to spread for the rest of the month. 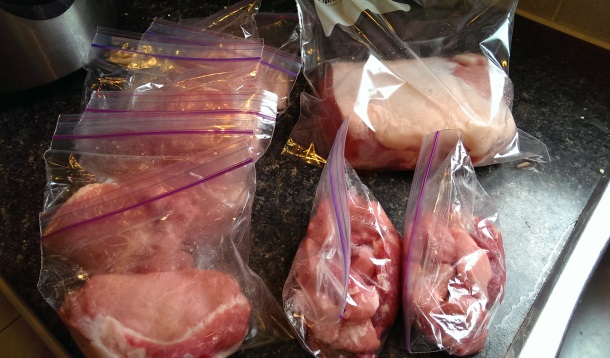 There were a lot of people who commented how easy this challenge would be just by bulk buying. Bulk-buying is a double-edged sword. I actually discovered that in many cases, Costco was actually far more expensive than the grocery store, even before items went on sale. But there are still a few really good purchases to be made there routinely, especially my son's soy milk, bread, and eggs. The other problem with buying something in bulk is, even if it's a really good price, it takes a big chunk out of the budget, and that can hamper one's ability to get variety. I usually go to Costco with a friend, and we often split packages. I would recommend that anybody on a limited budget split bulk items with another purchaser, at least while trying to build up a pantry, unless the items are a reasonably priced staple like eggs or bread.

As far as other bulk options go, while this is certainly feasible for many, we were restricted heavily because of my son's allergies (he's allergic to dairy, nuts, and peanuts). Most items in bulk bins have some risk of cross-contamination with one or more of these items.

So, cheers! We've survived week one. I'm hoping this week was the hardest part, and it gets easier from here.

Read about Anne's Hunger Games Adventure from the beginning.

Could You Feed Your Family for $5.50 per Person Per Day?

I Fed My Family On a Budget & It Sucked

The Emotional Cost of Budget Eating

Budget Eating: You Won't Starve, But You'll Be Exhausted

Anne Radcliffe: Dinner - It's Not Rocket Science Epic Eggnog by the Cup