Or, Kittens Having Kittens 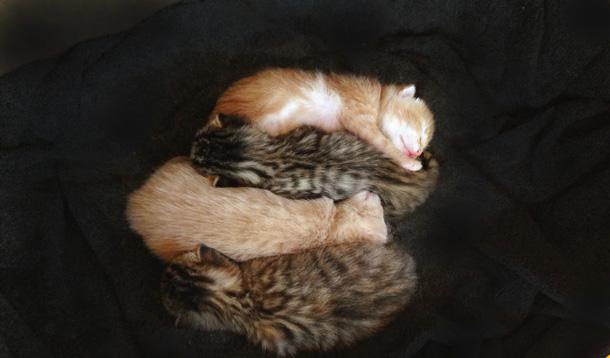 The first pet our family had was a cat named Kitty. Her real name was Milley, but our son was nineteen months old at the time and he could only say "Kitty." Kitty she was.

Kitty was six years old and her owners were moving overseas. I had a toddler and was a month away from baby number two. Kitty had been rescued from the SPCA and spent a few years with toddlers, so I knew she's be fine. She was more than fine. She was awesome.

A few years later, my husband had a bee in his bonnet to get a puppy. We had two boys, aged four and six, and a girl who was two. I told him ABSOLUTELY NOT, because we had just escaped the baby years. Puppies = babies = I was SO DONE with sleepless nights. He would email me ads of available puppies and I would shoot each one of them down.

He was relentless, and narrowed his search down to a crossbreed he really wanted (German Shepherd/Golden Retriever) and I caved. He followed through with his vow to deal with the middle-of-the-night puppy issues (He did the same with our human babies), and then we had Diesel the puppy who became Diesel the hundred-pound dog.

Two years later, a family friend had bought a puppy — half Shih-Tzu, half King Charles Cavalier (She looks like an Ewok) — and realized that puppies were a lot of work. We adopted Zoey into our life because she (was cute, and) needed a home. Small dogs were never in our plan (SO MUCH BARKING), but she needed a home and we have space. Plus, she and Diesel are BFFs.

The next month, our oldest son asked for a cat for his birthday. I thought that maybe we should get a guinea pig instead, but remembered that guinea pigs are rodents and cats are independent and I talked to a friend who helps run Critter Aid. My son wanted a black cat, they had a one-year-old black and white cat up for adoption, and then Chica (We should have renamed her) came into our family.

Last year, our dear Kitty was thirteen years old and in failing health. She had arthritis and her kidneys shut down on her. The litter box was a mess and then there was the night that my husband and I spent three hours washing cat urine off of our three bins of LEGO. Our kids witnessed Kitty slowly decline and they were prepared for her departure.

They were sad to lose her, but they are kids and asked if they could have a kitten.

We got a kitten, and we named her Lucy.

The kids repeatedly asked if Lucy could have kittens one day and we said no. Over and over and over. I watched The Price Is Right growing up and Bob Barker always reminded you to neuter and spay your pets. Two of our animals were rescued, and Lucy should count as a rescue cat as well. (The place we picked her up from was an old one-bedroom motel room, full of garbage and dirty dishes. Also, twelve cats and five dogs. The smell was indescribable.)

In the back of my mind, though, I thought that having kittens would be a pretty great experience for my kids. Watching the birth, helping to raise them, and adopting them out to friends and family would be a pretty neat experience. I'm pretty sure why this Type-A, super-organized girl "forgot" to get Lucy fixed. We live on an acreage that backs onto Crown land and I've never seen a stray cat on our property, but Miss Lucy went into heat and the boys came to the yard.

She gave birth to her four kittens last week and it was as amazing and fascinating as I thought it would be. The kids watched her give birth, free the kittens from their sac, and get them all cleaned up. They've witnessed her being such a good Momma to the kittens and all take turns filling her food and water dishes, and showering her with love. The kittens should open their eyes any day now, which will just make this experience even more fun.

Maybe "responsible" people shouldn't let their cats have kittens, but ours are all spoken for already. When we went looking for a kitten, it took me a long time to find a free kitten. When I saw the ad for Lucy, I beat out a number of people who called right after I did.

I expected to get a bit of flack — and I have — but I think I'm a pretty decent human human being and a pretty fantastic parent, if I'm being honest. Judge not lest ye be judged.

Besides, what kind of world would it be if it was a world without kittens?

Boys Can Do Anything Girls Can Do 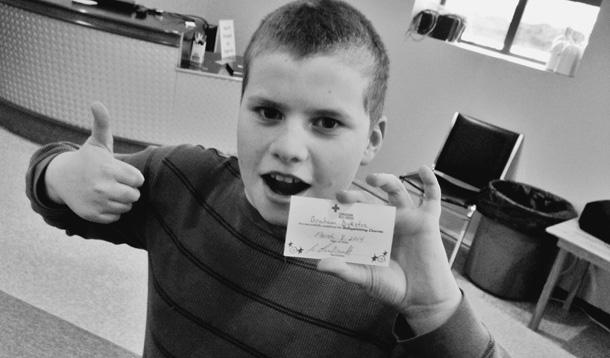 I started babysitting at an early age. I moved in with my Dad and his third wife when their first baby—a girl!—was not quite two. My stepmom was pregnant with their second child, and a few months later there was a boy in the house.

I remember the first time I took my wee baby brother to change his diaper. I took everything off and was confronted with something new.

Fast forward a bunch of years, and my firstborn baby is eleven. He can legally babysit other human beings, and he completed a course this past weekend that makes him an official Babysitter.

My boy has always been great with kids. His younger brother arrived when he was twenty months old, and he was beyond happy that he had his very own BEE (Baby) in the house. As he's grown older, he's been the favourite with our friends' younger kids. He'll hang out with the wee ones when we have a get-together, and he loves to volunteer in the nursery at church.

He's looking forward to babysitting, now that he's completed his course, but I think I may have to temper his enthusiasm. I think that female babysitters may be the first choice for the majority of people, based on what I've seen.

Would you hire a boy to babysit your kids? Why or why not?

Anxious about leaving your kids with a babysitter for the first time? You're not alone!

Here's what you can expect to pay your babysitter at the end of the night.