I have no idea what the next ten years will bring, I only hope I'll survive 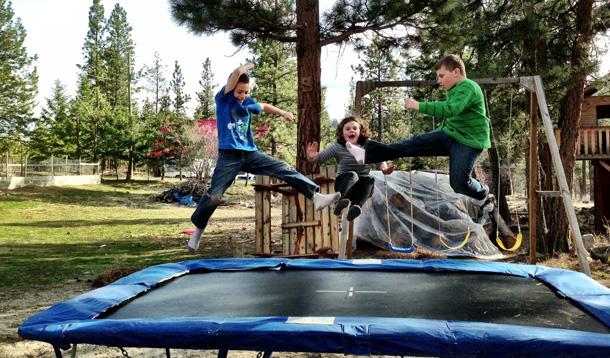 Ten years ago I had a newborn baby, a husband who left his job at a lumber brokerage to venture out on his own with his dad (in an office in our home), and a maternity leave from a great firm I was happy to be a part of after leaving The Most Amazing Firm Ever in Vancouver two years before. I went back to work when my firstborn was eight months old and my husband balanced his work with our easygoing baby. Before we knew it, I was pregnant again and then I was on a maternity leave with a newborn boy and a twenty-month-old boy and a husband who was working fifty steps away.

I often say that we would not have had a third baby if my husband hadn't been working from home. But he was, and we did, and two years after our second son, we welcomed a baby girl into our family. We had three kids in less than four years and it was as crazy as it sounds. There were diaper blowouts, there were meltdowns, there were baby smiles and giggles, and there were many, many photos and videos of both the mundane and the amazing.

After child #2 and before child #3, I discovered blogging. I started writing and ranting and making new friends and having new job opportunities. I have always written, and now I was getting paid to write my words for others. I switched from the corporate side of accounting to the education side and now work from home in that office that we made for my husband ten years ago, balancing my time between the accounting and writing work that I do. My husband is no longer working in that office because the economy slid and the lumber industry all but died and he fell into a job that is so perfect for him, with his organizational skills and soft-spoken nature and innate ability to draw kids to him.

He's the children and families pastor at our church. Which means that despite my lifelong efforts to the contrary, I am now a pastor's wife. I'm still coming to terms with that.

He is also a farmer at heart who has turned that love into more than a hobby; He tends to approximately fifty chickens on our acreage out here in the country and sells the eggs they lay to friends and family. I will often spend my time washing the chicken eggs of the shavings and the poop with my ear buds in, listening to my music and taking the time to process what my day has held and thinking about both the past and future.

In ten years I've gone from being a 'normal' contributing member of our church, to being known as "Mr. Matt's wife," with more expectations on me than I'm probably aware of. I've gone from having a secure profession to doing work that is more fluid than I've ever been accustomed to. I've gone from nice dinners out, to hours spend hand-scrubbing chicken poop off of eggs. I've gone from being a new mom whose biggest concern was the eating and sleeping habits to being a mom with three kids hurtling toward the teenager stage with no real idea of how we're going to get through it unscathed.

Looking forward, I have no idea what the next ten years will hold. Based on the last ten years, I don't want to even venture a guess because I'm sure it will be even more amazing and dumbfounding and crazy than I could ever imagine.

I'm just praying that I get to the other side fully clothed and in my right mind.

Angella Dykstra: She Makes Cents You Won't Die in a Dumpster: How to Save for Retirement NOW

Angella Dykstra: She Makes Cents How My Son Racked Up a $1681 iTunes Bill in One Month