When Can You Leave Your Kids Home Alone?

And how did you know when they are ready? 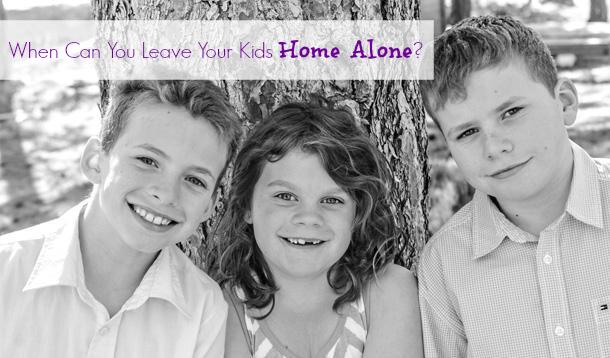 Last spring, two of our friends had daughters who turned eleven. They promptly took the Red Cross babysitting course — eleven is the minimum age — and informed us that they were available to babysit for us. My oldest son was nine years old at the time and while there is no minimum age in B.C. for how old kids have to be when left at home, we didn't feel that he was quite ready to be left in charge of his younger brother and sister. If we were going out on a night where we wouldn't get back until quite late, we used older babysitters, but if we were just going for an early dinner and a movie we hired one of the younger girls. It seemed a little silly at times, because while we used to leave detailed lists for babysitters when our kids were younger, now all we had to do was leave our cell phone numbers. All three of our kids know the bedtime routine, how to work all of the appliances/electronics/etc. and what they can and cannot have for a bedtime snack.

In the past few months we revisited the thought of leaving our oldest in charge of the other two for short periods of time. He's in fifth grade and has volunteered for a number of leadership positions at his school. He also volunteers in our church nursery and is so great with babies, toddlers, and little kids. He rarely, if ever, fights with his younger siblings (My kids don't fight much at all)(Please don't hate me) and he's been wanting to take on more responsibility around here. He asks me what he can do to help beyond his regular chore list and has been really loving to help with the laundry and is learning how to cook some basic meals. He's always been cautious, and responsible, and a really great kid.

The first time we left him in charge was for an after-dinner meeting my husband and I had to attend. We would only be gone an hour, and would be back to deal with the bedtime routine. When we got home we learned that ... it didn't go so well. My middle child said that he didn't like his brother being his "boss" and my daughter said that she wanted her "babysitter" to play with her but he wanted to play on his own. We had a family meeting about it the next day and talked about some of the wrinkles of the day before. We explained that when he is left in charge, he has to don the "babysitter" hat and act like one, or we won't pay him. We tried him out again the next week when my husband and I grabbed an early dinner at our local pub and it was fine. His siblings said he did a great job of being the "babysitter" and he felt really good that he'd done a great job of being in charge.

Since then, I'll leave him in charge if I have to drop his sister off at dance class or his brother at a birthday party, and he does that without being paid. It's one of the "perks" of being the oldest child. My husband and I have done early dinners a couple of times and we pay him, but not as much as we would pay one of our regular babysitters. If we're going out for a longer/later date night we still hire one of the older babysitters, even though he thinks it's a little ridiculous. (It does seem odd, but better safe than sorry, I believe.) When he's eleven, he'll take the babysitting course and we'll pay him the going rate. It's only a few months away from now and we think that this is great practice for him in the meantime.

It was weird and a little bit hard to decide if it was "okay" to leave him in charge before he was old enough to take the babysitting course. We talked to a number of people with kids the same age and they were giving their oldest kids little tests of responsibility with no issues. If I look back to my own childhood, my mom would leave me in charge of my younger sister from the time I was eight. Eight! I've never taken a babysitting course and somehow managed to keep three children alive.

Do you or did you have kids in that same age group? How did you know when they were ready to be left in charge? Or, how do you know that they're not quite ready yet?