Reduce the risk of bad experiences from movies with these seven tips. 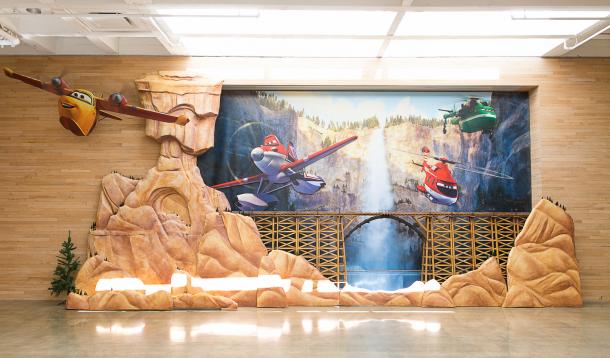 Has your child had a strong negative reaction while watching a movie? This was the question I asked the parents in my Facebook community, with an overwhelming response. Story after story of sleep troubles, separation anxiety, cowering and shouting were told by parents about stressful movie-watching experiences their children had.

Movies can create an environment for family relaxation, snuggles, and great conversations, but they can also be the fodder for nightmares.

I had the wonderful opportunity of being invited to Disneytoon Studios in Los Angeles, California to chat with the creative team behind Disney’s latest in-home release Planes: Fire and Rescue. I ended up at a lunch table with Jeff Howard, co-writer, and Paul Gerard, director of creative development, who I grilled about the topic of safe movie watching for children. 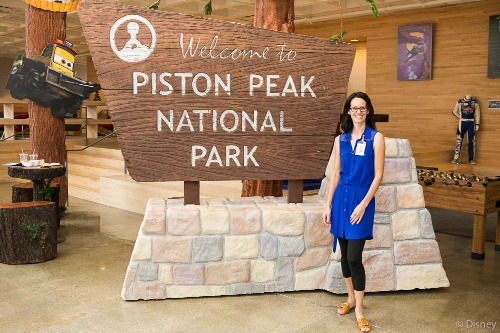 This photo as well as the one at the top of the article were taken in the common area at Disneytoon Studios (that's me!).

We talked about the types of movies we watched as kids, shaking our heads, shocked at what we saw as young children. What was clear in our conversation was that Gerard was mindful of creating movies that didn’t scare his own child.

Having written a novel before my therapeutic focus turned to parenting, I learned a lot about the story-writing process. I understand that stories are meaningful when the writer invokes the greatest amount of empathy in the reader/ viewer.

We first need to fall in love with the lead character, wanting him or her to win, then go through the emotional roller coaster of witnessing that character go through conflict and challenges. That emotional connection is what makes movies or books enjoyable. The chills of action and fear can really add to a story experience. These elements are present in children’s movies, too. It is important to introduce movies to children at a time when they are able to process their emotions and make sense of what they are seeing.

Have you noticed that in many movies, the parents are killed off early on? In researching this more, I learned that storylines are often focused on the child so the parent needs to somehow step aside or be removed. A child can’t demonstrate resiliency and survival ability if there is a parent around, solving all the problems.

My concern is with how this is done and communicated with parents, as the loss of a parent or sibling is the greatest fear of most children. Many of the parents who commented on my Facebook page talked about distress caused by the scene in Disney’s Frozen where the lead character’s parents disappear in a shipwreck. Most parents were surprised, left struggling to explain to their upset child what had happened. Chase scenes and ones where a previously established “good guy” turns into a “bad” one can also be incredibly disturbing for children. (I prefer to say that a person has made a “bad” decision: not that (s)he IS “bad.”)

My hope is that movie-making teams will consult with therapists like myself if they are going to include distressing subject matter for children, so this can be done in the gentlest way possible.

In terms of the rating system, when a movie is rated as “G”, “PG” or “PG-13,” the criteria used for choosing these letters is based on content including nudity, sex, violence, drug use and profanity. These letters do not reflect emotionally intense themes like death, serious injury, parental separation, being humiliated, or a nerve-wracking chase scene.

A child’s ability to handle intense film scenes is going to vary widely depending on that child’s sensitivity, life experience, and language development. Ultimately it is up to the parents to choose films they believe their child will enjoy more than be afraid of.

Here are my recommendations for reducing the risk of strong negative movie watching experiences:

Ensure that you watch a movie your child is interested in before (s)he sees it.

Consider watching movies in your home rather than a theatre.

Intense scenes might be easier to tolerate on a smaller screen, where your child can control the volume, pause the film, or skip scenes if necessary. I suggest doing this for children ages 4 to 7. Your child might also feel more comfortable cuddled up with you, able to hear your reactions and reassurance over the sounds of the movie.

Identify troubling scenes and chat about these before your child sees it.

I believe the film Maleficent is being released on DVD this week. In this case, young children could be quite scared by the lead character, Maleficent’s reaction to having her wings cut off and also the curse scene (sorry if I’m spoiling it). The sounds, colours and look on her face evoke strong emotions, which are fitting for this scene.

Use age-appropriate language to forewarn your child of periods in the movie they might find scary (if you feel your child needs that). You can give your child the option to skip over scenes, relying on your watered down description of what happened.

I like the Planes: Fire and Rescue movie as a first introduction to movie watching for children because there isn’t a villain or death scene (this movie is available to watch at home Nov 4). The film is centered on the theme of second chances and the action revolves around planes zooming near forest fires rather than chases. There are some parts where characters become trapped by the fire, but are rescued by the various Planes characters.

Put the focus on feelings words, as when a feeling is identified it has a better chance of being processed. When Dusty left to go learn firefighting, my five-year-old son looked at me with a sad face, “Mommy. Won’t Dusty be sad because he’s away from home? Where is he going?”

I said, “He’s going to firefighting school. He’ll be sad and at the same time, happy to learn new things. Do you think he’ll be okay?” We paused the movie and talked about what Dusty could do when he is missing home. Mentioning two feelings at once introduce a concept called mixed feelings.

Encourage your child to ask questions until (s)he is satisfied.

Sometimes we can lead the witness with questions that are more involved than our children can handle. Give your child the reigns for question asking; pausing to check in and see if he or she has any.

Jeff Howard made a comment that stuck with me. He said, “Parents can use enchantment or story-telling to introduce tough topics.”

In their short lives, my children have experienced the death of people close to us, children near to them losing one of their parents or going through divorce, moving homes, and people doing “mean things.” Stories can be a good way to discuss these big topics in a way children can tolerate.

The American Academy of Pediatrics has posted a list of guidelines for screen-watching time for children and adolescents. Children two and under are best to not be shown a screen of any kind, and for children older than two, no more than one to two hours of “quality programming.”

I suggest that three-year-olds are best watching shorter shows with your supervision (that do not have commercials in them) and save full-length feature films for children over four years of age as their personality allows.

Do you have any questions or comments? I invite you to write those below or over on my Facebook page, where I post free parenting information.