Let's follow the example of the Downie and Wenjack families coming together. 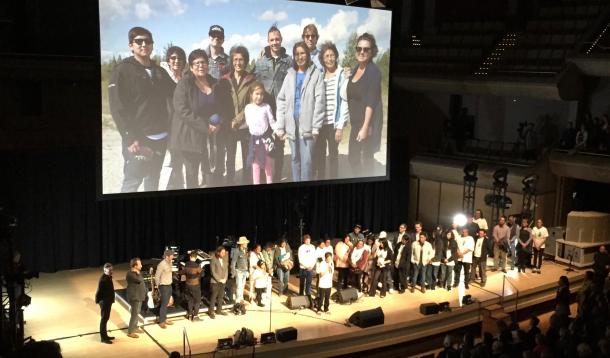 Imagine having your school-aged son taken from your home and sent hundreds of miles away to a boarding school where your worst nightmares of how he might be treated actually happen? This unthinkable event was reality for the Wenjack family and the parents of 163,000 Canadian children who were taken from their families and send to residential schools 50 to 60 years ago.

The story of how Chanie Wenjack, at age 12, was forced to go to a residential school 400 miles away, later dying after escaping and attempting to walk back home along a railway track, is being brought to our attention by Gord Downie and his Secret Path project.

I knew that when I planned to see Gord Downie’s Secret Path show in Toronto, there would be sadness and tears. I wanted to go, knowing what I might be walking into, because standing in the space of Gord, the musicians, the Secret Path film, the Wenjack family, and other Indigenous people was a difficultly important thing to do.

This sense of importance comes from my personal connection with Gord, the connection I feel with Indigenous people, and a deep desire to participate in the truth and reconciliation process. Growing up in Thompson, Manitoba, and later having my first teaching jobs in First Nations communities and isolated reserves, I learned to appreciate and love the Indigenous people and culture.

I had the opportunity to live on a remote reserve for a year and experience both the pain and beauty of being there. I remember one family in particular – the father’s loyalty to his family was so inspiring. He did everything he could to financially, emotionally, and spiritually support his children while trying to keep them away from addictive temptations.

While up in the North, I heard stories first-hand from those who had been in residential schools, and felt those years ago, mortified that people would willingly harm others – children, in particular. Where were their hearts when they took those children hundreds of miles away from their families?

When the first scenes of the Secret Path film were lit up on the big screen at the back of the stage where Gord and the musicians stood, I was struck by the image depicted of Chanie Wenjack. My own boys look a lot like him: they have dark eyes, dark hair, and a dark complexion (my husband’s family is from India). I kept thinking about my own sons being taken out of my house to a place far away where I couldn’t see, hear, or hold them. It was an unbearable thought.

At the end of the performance, the Wenjack family members were invited up onto the stage. Pearl (Wenjack) Achneepineskum, the sister of Chanie Wenjack, sang a beautifully haunting song, then said: “To all of you in the audience. Be thankful your children are only seconds away.”

Earlier in that evening, while we waited in a long line to pick up the tickets, those around us in that space doing the same thing were some of the most influential people in Canada. Some of those people were Marc and Craig Kielburger (co-founders of WE.org), David Zimmer (ON Minister of Indigenous Affairs), Michael Budman (ROOTS), Atom Egoyan (Film Director), Joseph Boyden (Author), Paul Langlois (The Tragically Hip), and Chief Stacey Laforme of the Mississaugas of the New Credit First Nation.

Most of these people were at the show with their family members, which seemed to be an over-arching theme of the event and even the Secret Path movement: families connecting to heal the past and create a brighter future together. The families at that show have the ability to positively influence the relationship and truth and reconciliation process for Canada.

I was there with my dear friend Erica Ehm, founder of YMC, who said, “I kept thinking of the words of Sting’s song ‘Russians:’ Russians love their children, too. It’s a universal truth – we all love our children. This really is about families.”

Gord Downie’s two brothers Mike and Patrick were on the stage with him after the performance. Mike was the emcee for the evening. I watched Pearl Achneepineskum stand on the stage near them, openly weeping about the brother she lost fifty years ago. She stood for a few moments with tears streaming and I watched Gord looking at her. He moved towards her, holding her in a long embrace. We all just got quiet and felt that. Pearl’s vulnerability and strong emotions even though this happened fifty years ago remind us that this is real. One group of people took another group’s children away. That’s what happened. This experience turned the words I have read in articles and heard on the news about residential schools into feelings deep in my heart.

At the end of the show, Gord said: “Let’s not celebrate the last 150 years. Let’s just start celebrating the next 150 years. Just leave it alone.”

The cover photo of the Downie Wenjack Fund Facebook page has a picture of the Downie family and the Wenjack family with the simple words: “Do Something.” Maybe that something starts with Indigenous and non-Indigenous Canadians being in the same space together?

Perhaps part of my “do something” is to connect with an First Nations community near us or with those I used to work with? I’m certainly going to share my experience at the show and the curriculum being developed by the Gord Downie & Chanie Wenjack Fund with the students in my school.

Discussions with today’s youth about this historically significant period of time are important to making concrete changes for Canada as our young people grow older. These talks will help shape the future of our country into a place they are proud to call home.

My bigger goal for doing something is to talk with the people I met at the Secret Path show about a system of education I believe might work in remote reserves so the children there wouldn’t need to leave their homes.

Pearl’s shared these words in a recent CBC article:

"I'm very much concerned about the children going to high schools and losing their lives," said Achneepineskum, a grandmother to dozens of school-aged grandchildren. "Every time a child loses his life or her life, I walk through the same path and I remember the fear and the unhappiness of going, and wanting to get home."

Maybe there is something I can do to change that? I’m certainly going to try.

I encourage you to see the Secret Path film, buy the book, and hear the music. It might be a tough and uncomfortable thing to do, but often uncomfortable is the gateway to positive change.

Early in Friday’s show after we all applauded at the end of a song, Gord looked out at all of us and said, “It’s going to get harder to do that as the night goes on.” That’s okay, Gord, we stayed with you, applauding who you are and the deep emotions you are stirring in us. We can do “hard.”