Use this brain-growing technique to improve your child's thoughtfulness. 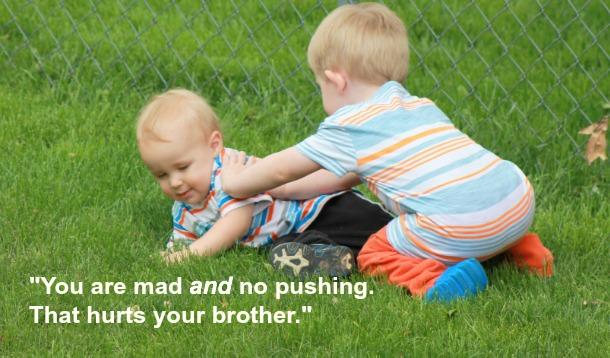 It is easy to feel that our children are selfish or trying to hurt us when they are little. Young children can be quite aggressive! Did you know that two-year-olds are actually the most violent beings on earth?

It is helpful to know that children aren’t throwing, hitting or shouting at us because they are trying to hurt or manipulate us, they are doing so because they are overwhelmed with emotion and lack a brain functioning called, “having mixed feelings.”

This is an awareness that comes with maturity and time (and some coaching!). Mixed feelings help you think twice, have empathy for others, and be more considerate. They can help you to think, I love eating cake! and at the same time realize, Eating a second piece of cake will not help me to stay healthy or maintain the body weight I want.

When a person holds these two thoughts, the one a person ends up acting upon—eating too much cake or stopping herself from doing that—depends on how strong her positive inner voice is. It’s that devil on our shoulder saying either, Go ahead, have the cake; you deserve it (that guy was an a**hole for breaking up with you) or One piece is enough to enjoy it. Move on to the rest of your day.

How do we help grow mixed feelings in our children?

We do so by planting the seeds to think or feel about two opposing concepts at the same time. This is done by pointing out when a child, your partner, or yourself is simultaneously considering how he and others is perceiving something. Use words to explain to your child that he feels one thing and at the same time, feels another, different thing.

When a toddler does normal toddler things like biting, hitting or throwing, say, “You are angry and no hitting.” (AND, not BUT) “Hitting mommy hurts me! Ouch!” You can add in a scowling face when saying “angry” and shake your head “no” when you say that word.

For a four-year-old, add some more words, “Your brother took your car (see what happened). I see you are angry (name the feeling) AND it is not okay to hit him.” After a pause for him to let those words sink in, then talk about options instead of hitting, “When you are that mad, use your calm-down plan so you can think instead of hit.” Pause again for more processing, then offer, “What are some things you could do or say instead of hitting him?”

The steps I just described are what I call a frutration-reduction plan: 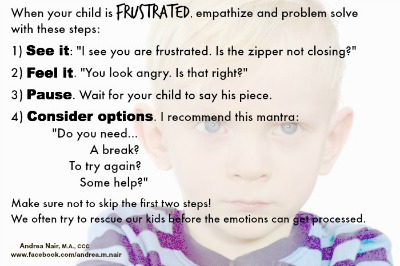 Another way to grow mixed feelings is to use the words “at the same time” often like this:

“I really want eat the last cookie, but I know if I do that, you won’t get any. I want this but at the same time, I know you do, too. What can I do?”

“Your dad really wants to come to your game but at the same time, he wants to be at a very important meeting. What do you think his options are?”

“You hit your sister. That is not okay. She feels sore and sad when you hit her.” Pause, then say, “When you want to hit her because she called you a name, at the same time you know hitting hurts her. What else can you do to get her to stop calling you names?”

When a child is unable to do mixed feelings (which doesn’t usually start happening until after around age five) he will stop after the first thought: I am angry and I want to hit my sister. Continually coaching him through to the next thought, Hitting hurts her, will eventually grow that brain connection.

Neufeld says that when a child (or parent) can’t hold the two thoughts, she “has lost her mix.” Think of the times when you can see your child is struggling, but you can’t get the mix to be empathetic for your child. Perhaps as your child is screaming, refusing to get her pajamas on, and you keep telling yourself, I’ve had it with this kid! you are unable to hear the mix, I see that forcing her into her PJs hurts her. I need to stop doing that and think of a playful or clever way—or pick my battles, let her sleep in her jeans, and try again tomorrow.

*Often, the solution to getting your mix back is to be rested and walk through your calm-down plan.

I continually post free parenting support and resources on my Facebook page. If you have any questions or comments, I invite you over there to join our parenting community.