Turn to Toys to Distract, Connect, and Play with Your Child I am hoping to shift a troubling trend by sticking with toys as a means to distract, connect and play with young children rather than using phones, tablets, TVs, or video games.

Parents are giving their babies, toddlers, and young children things with screens to get a moment of rest, play with them, or distract them through the rough patches. You know, those moments where you need to get a diaper off a squirming child before they smear poop all over your friend's rug, or when you are trying to shove a raging toddler into a car seat while your grocery cart starts driving itself down the parking lot.

I need to tell you about a friend who offered her toddler the car keys in the above scenario—frazzled while trying to get the child buckled in and groceries stopped, the mom closed the car door, reaching for the grocery cart. The moment her hand reached the cart, she heard the dreaded "thunk" of the lock becoming engaged in the car. Frantic, the mom ran to the car door to discover she had left the keys in her toddler's hand, and the child had locked the doors! After some time of failing miserably at trying to get the child to press the buttons by waving and shouting through the window, some strangers offered to help find a solution to the problem. As the car was heating up, they realized they had to get in immediately and got a hammer from the store to break the window.

In terms of screens, we KNOW that they cause attention problems and can wreak havoc on creativity and reading ability down the road, so although they might give us a reprieve, and the kids love them, we need to introduce screens as late as possible. It is MUCH easier to delay introducing screens than try to take one away once you realize the child is demanding it too much.

So I was happy when Fisher-Price approached me to write this sponsored post about their Fisher-Price Favourites toys as I was able to write with absolute sincerity about a company I have used for so many years. I turn to Fisher-Price as I remember my Fisher-Price toys from when I was a kid, which are still being played with some forty years later. 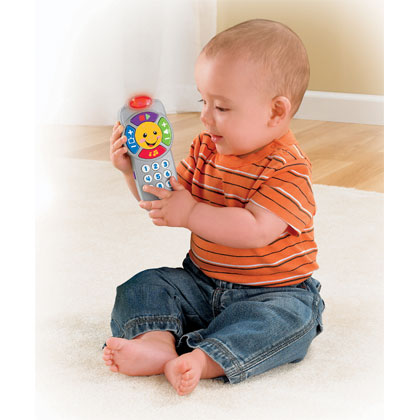 Instead of a phone or your keys, I have found a toy that works beautifully to get through any child melt-down moment: the Laugh & Learn Click n' Learn Remote for ages six to thirty-six months. It has buttons, lights, sounds, and most importantly the ability to turn down the volume.

As I am part granola/organic mommy, I initially tried to stay away from things with batteries, but I quickly learned that there are times for a smart trade-off between sanity and a few batteries, which can be disposed of properly. Also, a toy like this is a much better solution than giving a baby your phone. Have it handy with you in your diaper bag or nearby the changing station. The remote is great as you probably know three-year-olds like to holler "let ME push the button!!" My son reluctantly passed this toy along to our friends with nine-month-old twins.

The second kind of toy I recommend which kids will play with as young as one (or younger with supervision), and as old as seven is the Little People Wheelies Stand 'n Play (the box has the ages as 1.5-5). My three-year-old, five-year-old, and seven-year-old neighbour were all huddled around it yesterday having car races. Toddlers and young children can use this toy as is, or as I have seen with my kids, create races, stories, and add characters for imaginative play. Parents can use this stand-up toy to play along or sit down near the child to catch a much needed moment of rest.

Again, the granola in me is happy this toy is really sturdy and will survive years in our family, and many more years when it gets passed along to another family. I also bought a similar stand-up kind of toy called the Fisher-Price Little People Zoo a few years ago to leave at Grandpa's house.

Please resist the temptation to use screens like your phone or tablet to get a reprieve from your young children. Toys like the ones I mentioned from Fisher-Price are win-win in terms of opportunity to get through rough patches and provide the kids with fun that continues through the years.