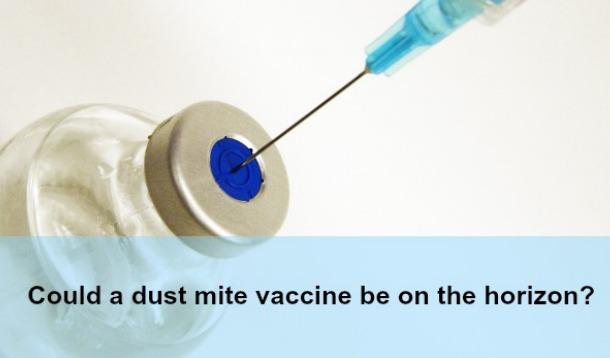 Sure, it's summer, and the allergens abound, not to mention the "pollen vortex" that hit us hard this past spring. But do you know that Canadians spend upwards of 90% of their time indoors? It's true. Most of us work indoors, so spend the majority of our lives cooped up inside, which means allergies to dust mites are more of a hassle than outdoor allergens for many. This is why the recent news out of the University of Iowa that there's a dust mite vaccine on the horizon gives allergy and asthma sufferers hope!

Dust mites are teeny tiny, disgusting little things that love living in carpeting, bedding, pillows, stuffed animals . . . everywhere you don't want them to be. And it isn't actually the mites that cause the allergic symptoms, but their poop. How completely grody. In any case, they cause a lot of problems for allergy sufferers and for asthmatics, in particular. Long-term exposure can actually lead to lung damage, so it's a good idea to keep them under control.

Researchers at UI have discovered a concoction that prevents the body from reacting to dust mites, using an ingredient most often used to battle cancer. To read the medical lingo about the study, here's the journal publication. Basically, the vaccine would change the way the body reacts to the allergens. I'm interested in this because both my husband and son suffer so much with dust mite allergies that a vaccine may be the key to easing their asthma symptoms.

Does anyone in your household suffer from dust mite allergies?

Find out how to banish dust mites.

And here are some more tips on how to combat household allergies.

8 Ways To Keep Mosquitos Away This Summer

8 Ways To Keep Mosquitos Away This Summer 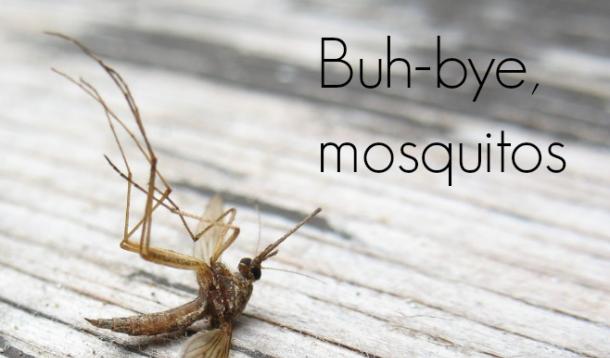 My daughter has such awful reactions to mosquito bites that she's adverse to even going outside when the skeeters start to come out. And forget camping with her. It's interesting that she is the one who gets bitten so often when my son, who has virtually no reaction to bites at all, rarely gets a bite. Whassup wit dat, mosquitoes? The poor kid's eye completely swelled shut while we were on vacation thanks to one tiny bite.

Suffice it to say, we've tried every product on the market trying to ward off the bugs, and have found only a few things that seem to help. In searching for some other options, I came across some interesting stuff!

Here is a round-up of things I discovered — some work, some do not, and some seem to fall into a grey unknown area. But anything's worth a try when the reactions are so bad, right?

Wear Light-Coloured Clothing
I've personally never found this very helpful, but it's the first line of defense to keeping mosquitos away, apparently.

Use Citronella-based lotions/sprays
We use this one from California Baby, with limited success. The upside is that it isn't harmful like DEET, and it smells lovely. Downside is that it has to be rubbed into skin often, and you really need to use other options in combination with it.

Anti-Mosquito Apps
Developers insist that these apps keep mosquitos at bay by emitting high-frequency tones that skeeters don't like. Science says it's totally bullshit. Check out the BBC video in this article to see how the apps work (or, rather, don't work).

Mozi-Q
Alright, so you know how I'm a skeptic when it comes to homeopathic remedies. Naturopathic, fine. Homeopathic, hmmm. So when I was sent some Mozi-Q to try, I didn't expect much. Mozi-Q contains different homeopathics that, when combined, ward off mosquito bites. We had our daughter take it before heading out in known skeeter territory, and when she'd normally be covered in bites, she came out rather unscathed. Impressive! And when we gave it to her after getting bites, it did seem to help with the swelling and itching. This one's a good bet if you're not interested in some of the smellier chemical options.

Clip-On Repellants
Nope. Just... just nope. This idea works exactly as well as you think it might — it doesn't.

Avon Skin-So-Soft
For some unknown reason, this stuff works. As a kid at Girl Guide camp, we all knew it and used it. Avon says there's nothing special in there (and they apparently do make a line of repellant) that makes it work as a mosquito repellant, but it works!

Hang out with Marigolds
If possible, plant marigolds in your yard, as they help to keep mosquitos away.

Good ole DEET
DEET works, period. But DEET is also very toxic to humans so many people don't use it. We spray it on clothing, not skin, and use the citronella-based, natural options on bare skin. Wearing long pants, socks, long sleeves and basically keeping as covered as possible when the mosquitos are out is the best option, and using DEET-based sprays (see Health Canada's guidelines for usage)

What do you do to avoid being bitten by bugs? If you've got a tried-and true method, please share!

Read this! 10 things NOT to say to someone with allergies.

Many People Are Unaware They're Allergic 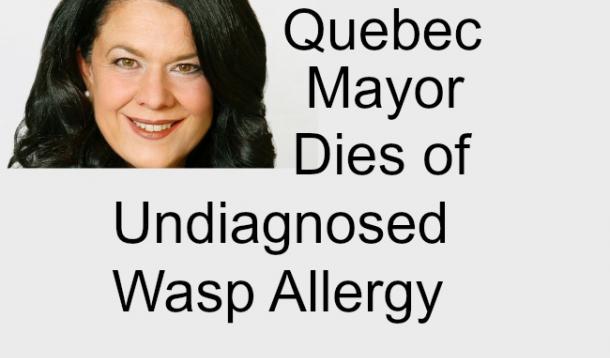 Lucie Roussel, mayor of the La Prairie community near Montreal, died after being stung by wasps many times. While gardening, she stepped on a wasp nest and was stung 15 times. At only 51 years old, she leaves behind two teenage children (who already lost their father to a heart attack).

What's so scary about this tragic loss is that Roussel was completely unaware of her allergy. La Prairie spokeswoman, Chantal Charron, said Roussel was never diagnosed with a wasp allergy, despite all signs pointing to anaphylaxis as cause of death. CTV News quoted Dr. Susan Waserman, well-known allergist from McMaster University, as saying that although this phenomenon is possible, it is certainly not common. Waserman also said that those who have no reason to believe they're allergic are often caught off guard without life-saving epinephrine auto-injectors on hand.

When anaphylaxis occurs, airways swell and can close completely, blood pressure drops dramatically, and the heart beats erratically. An epinephrine auto-injector, such as an Allerject or EpiPen, gives the patient a dose of adrenaline, giving them time to get to an emergency room where doctors can tend to them in case of a secondary reaction. Because the allergen (in this case, wasp venom) is still in the victim's system, it is imperative they're seen by doctors immediately.

Deaths like Roussel's are not common, which somehow makes it feel even sadder, doesn't it? Should an epinephrine auto-injector be in everyone's First Aid kit these days? Both Allerject and EpiPens are available at pharmacies in Canada without a prescription, and offer some security in cases like this. Would you purchase one just in case?

Read more about discovering allergies, and how to administer an EpiPen in case of an allergic emergency.