Dear Lisa Turner; Thank You for Writing This

One Mom Goes from Anger to Understanding

Dear Lisa Turner; Thank You for Writing This 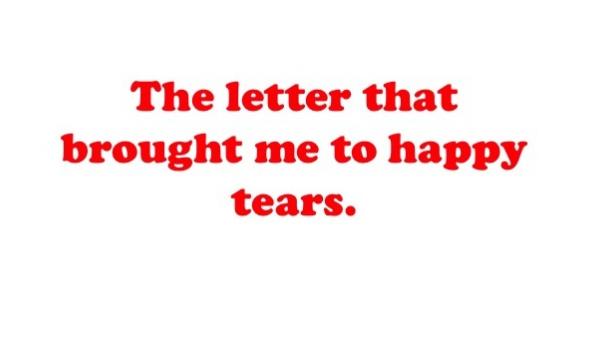 I saw this circulating the interwebs today, and although it's more than a year old, I wanted to share it with readers here. I can't tell you how much those who suffer from severe allergies, and those who parents kids who suffer, appreciate the rest of the world understanding even just a little about our struggles. It means the world that a parent who doesn't have to manage these challenges wrote this, and if I could hug her, I would. And I'm not a hugger, so that's saying a lot.

Here's the text from a letter posted on Quora from a woman named Lisa Turner. I hope you know, Ms. Turner, that it brought tears of appreciation to my eyes.

I am writing this letter to you because your school has decided to implement a ban on peanuts, tree nuts, and/or other foods that have been associated with life-threatening allergies, and I know the initial reaction you may have regarding such a ban.

I am the mother of a little girl who started school this year. About two weeks before school started I read in a local newspaper that the school she will be attending has decided to put such a ban into effect.

My first reaction was one of shock, but it quickly turned into complete ANGER! I couldn’t believe that the school would actually do something that drastic because ONE child had an allergy. Since when did the misfortunes of one dictate the rule for the majority? I rallied support together, I wrote to the newspapers, I called television stations, and I put up posters expressing my outrage and encouraging parents who felt the same way to attend the next school board meeting and “let our voices be heard.” I even drafted up petitions to have the members of the school board removed so that a new school board could be elected, one that looked out for the needs of every child instead of just one. After all, nobody was going to tell me that I couldn’t send my picky eater to school with a peanut butter sandwich! Then I went online to get some ammunition.

What I got however, was something completely different. I got an education. I stumbled across a site for people with life-threatening allergies and the parents of children with life-threatening allergies. The first thing I found out was that, although rare, it is a lot more common than I had realized, but being angry I posted my question, "Do you really think that a ban is necessary?" I used all my arguments. If a child is allergic to bees, do you keep all the kids in at recess? If a child is in a wheel chair, do you build a ramp or tear out the stairs? I mean after all, there are other allergies out there, and there is no way to guarantee that the school will be completely free from these foods, so where do you draw the line?

At first I wasn’t open at all to hear their reply, I was just venting, but then I really started reading what they had to say, and it was then that I started learning. You see… I put my daughter on the bus for the first time in her life. I was afraid she wouldn’t find her classroom. I was afraid she would forget to raise her hand before she spoke. I was afraid she would get on the wrong bus coming home, but what I wasn’t afraid of was that I would get a call from the school saying that my daughter wouldn’t be coming home; she is being rushed to the hospital by ambulance because of a common, everyday peanut butter sandwich. It was then that I realized what these parents are going though. Some don’t have the luxury of worrying about little things.

These parents aren’t trying to take anything away from our kids; they are trying to keep their kids safe. I looked back at my initial reaction so I could figure out what had made me so mad, and when I was completely honest with myself, I found the answer. I was mad because I was going to be inconvenienced. I was willing to put a child’s life in danger so my daughter could eat a sandwich, and what did that say about me? I mean, if I saw a dog attacking any child wouldn’t I do whatever I could to protect that child? And if that is the case, why am I so opposed to eliminating peanut butter from 5 meals out of the 21 she will have in the course of a week?

The fact of the matter is you don’t keep all the kids in at recess, but you don’t put a child with a bee sting allergy in a lunchroom full of bees either.

The fact is EVERY child is entitled to a “free and appropriate public education in a least restrictive environment”, translated that means the school has a legal responsibility to provide a safe learning environment for ALL children, and where do you draw the line? You draw the line when the unique needs of the community served by the school have been met.

It’s not easy to put your child in the hands of strangers when you know that many of them may have just eaten, or are bringing to lunch, the same thing that is poison to your child, and many of these parents would home school if they could, but just like you and I, sometimes that is not an option.

The parents of children with life-threatening allergies don’t expect us all to learn this overnight, and they don’t expect us to shop for our children as if they had this allergy, and while they know that the school will never be completely free from these foods, one less sandwich, or one less snack containing these foods being brought into the schools, will be one less risk to their child’s life.

I am not saying that it hasn’t been a struggle at times, but you have to ask yourselves… Is convenience really more important than life? In my book, that answer is no, so any small inconvenience I have is worth it.