On Bullying, Opinions, and Pitchforks 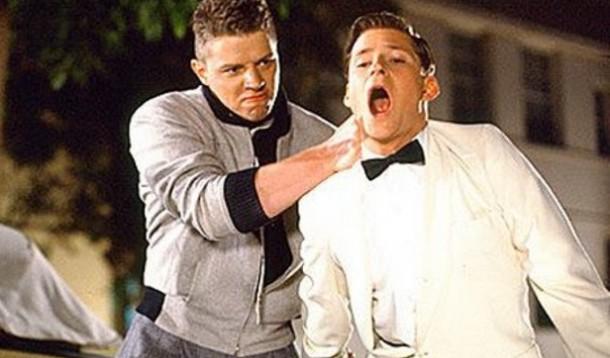 I'm opinionated, did you know that? (Shut up, I can hear you snickering through the monitor!) Saying, "I'm opinionated" seems to garner the same reaction as saying, "I'm a feminist" - it's not always positive. But why? We should all have opinions, so therefore all should be opinionated. (We should also all be feminists, but I'll save that rant for another time.) As the resident allergy blogger for YMC, I need to not only share but also discuss, defend, and sometimes assess and change my opinions. That's life in general, though, isn't it? An opinion isn't a fact just because you wish it to be, and I try to keep an open, compassionate mind.

That leads me to the stuff I read online. How many times will I read comments from those who don't deal with allergies whining and complaining and insulting those who do? It's relentless. Sure, you're absolutely allowed to feel like we're trampling your human rights by protecting lives, but that doesn't make it the truth.

You know the saying, "It isn't what you say, it's how you say it"? That saying really matters. Because having a discussion about a hot topic can be fulfilling for everyone involved when it doesn't degenerate into name-calling and jackassery. I first wrote about this on my personal blog, but I feel it bears repeating here.

First, let’s clear up some definitions.

Bullying isn’t what’s happening when someone expresses an opinion that’s different from yours. Not even when that person is expressing it in an aggressive manner. Nope, not even when their choice of words isn’t the most polite, or when you think they should have more tact.

Bullying isn’t (necessarily) name-calling, arguing, or putting people down. That, my friends, is being an asshole. And that says a lot more about the person (or people) doing it than about the one they’re name-calling.

Bullying occurs when there is a (real or perceived) imbalance of power. It is a repeated behaviour, meant to drive a victim down, to do harm, with force or threats. This is why it happens a lot to children, not as often to adults. (Although it absolutely does happen to adults!) It is intimidation, it is abusive, and it is habitual. It is not an argument on the internet or a disagreement in the schoolyard. Bullying tears off layers off self-respect, harms esteem, and pushes people to the brink.

Bullying is a terrible behaviour we must work hard to eliminate, most certainly, but the word is so overused that I fear it is losing any of its real meaning.

An opinion is a view, a judgement, a belief. It does not have to be rooted in fact, although it’s often confused as such. The confusion of fact and opinion is at the root of much conflict — religious, political, even scientific. No matter how much you believe in something, it doesn’t make it a fact. No matter how many people you have on your belief team, it still doesn’t make it a fact.

Opinions are just that: opinions.

Arguing vs. Debating vs. Fighting

I know, I know; we’re talking semantics here, but the words matter, don’t they? The meanings, at their essence, may be the same but the connotation is what matters here, and it’s crucial we understand the words before we get to labelling.

To argue is to try to convince someone of your beliefs or point of view. The aim is to present all the reasons why you’re right, and fight to the death to convince the other person of this.

To debate is to present, logically, your points of view and lay them on the table without necessarily demanding others agree. A debate is more logical and intellectual, with less emotion and more fact.

And to fight is to put all sense of propriety aside and start verbally or physically attacking another person. Oh, you don’t agree that my religion is the best one? Well, you’re fat, ugly, and stupid. Haters gonna hate! That’s fighting. It’s infuriating, immature, and it’s enough to make you want to pull your hair out.

The Heart of the Matter

I hear the word “bullying” being thrown around daily, and people seem to think that our interactions with one another have somehow degraded now that the internet is present, but I don’t think that’s true. Yes, there are certainly trolls who can leave hateful, anonymous comments, but this isn’t really what we’re complaining about. We’re complaining about people expressing opinions that differ from our own, for the most part.

Those assholes! How dare they argue with me? How dare they express (so loudly!) their points of view? Those bullies! There are so many who disagree, look at them with their pitchforks, all banding together to disagree with me! That person was rude to me on twitter, that bully! I made a comment and promoted my opinion on the internet and now a lot of people disagree — they’re ganging up on me with their pitchforks! Wah, wah, wah.

When it comes to adults and bullying, there far fewer instances when the word really applies than there are with kids. Though I absolutely think adults can use bullyish behaviours towards one another, unless there’s some kind of power imbalance, then the whole thing is just a bunch of adults behaving poorly. As adults, we have the tools and abilities to call people on this kind of behaviour, remove ourselves and/or protect ourselves physically and emotionally, though so many seem to enjoy playing victim. It is admittedly far easier to hide behind the word than to stand up for ourselves.

If someone disagrees with your blog post and calls you on it, that’s not bullying, that’s disagreeing. If you tweet something that rubs people the wrong way, that’s on you. It doesn’t matter if your words have incited the rage of one or many, it’s not bullying to have someone respond negatively.

No matter how rudely they call you to task, or how many insults they throw your way, unless somehow you’re beneath them on the power totem pole, there’s absolutely no bullying taking place. You might not like it, it may give you a terrible feeling in the pit of your stomach, but that’s the price of having an opinion, and it’s a worthy price to pay to have the freedom of sharing our opinions. If you believe so strongly in it that you spoke it aloud or wrote about it, stand up for it.

Stand up and defend your opinions! Tell the world why you believe in your points of view. Being different is what makes us grow. Questioning the world is how we progress. I’m not encouraging hate speech here… if that’s your jam, keep it to yourself because hate does no good. But as I teach my kids: never be afraid to let your voice be heard! And listen to the voices of others. Debate not to convince, but to learn.

It may seem like I enjoy arguing, but that certainly is not the case. I never, ever seek to fight with people, but I also will never, ever, shy away from standing up for what I believe. I debate to know more, to share my point of view, and to seek out knowledge (and spread it, too). Once, Sharon said something about me that I absolutely loved: “Alexandria Durrell has an opinion.” I hope that the world always knows that I have one, and that I’m happy to share it.

Category:
Family - Mummy
Tags:
Alexandria Durrell
bullying
opinions
behaviour
when is bullying not bullying
how do you define bully