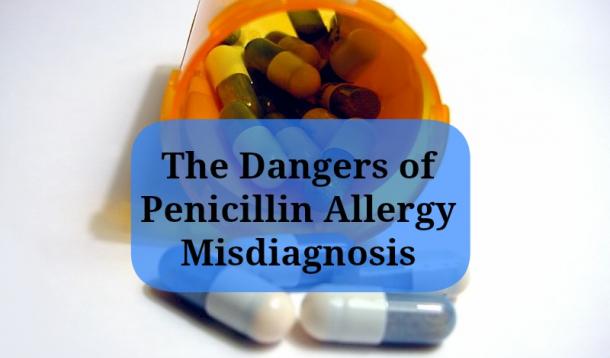 According to a recent study in the Journal of Allergy and Clinical Immunology, penicillin allergies are not only the most common drug allergy, they're also the most inaccurate reported by patients. Why is this? The repercussions of this are serious; some include extended hospital stays and serious infections.

An article from the Wall Street Journal reports that the study "analyzed data on 51,807 patients with self-reported penicillin allergies [who were] admitted to 12 [different] hospitals in Southern California from 2010 to 2012. During that period, patients labeled as penicillin allergic represented 11.2% of admissions. About 2% to 5% of the general population test positive for penicillin allergy, researchers said." So why is this? Why are people over-reporting an allergy like this?

Additionally, the study found that penicillin-allergic subjects (or those claiming the allergy) spent almost 10% more time in the hospital than the control group. I suspect this is because penicillin would be the first line of defense for many of the infections the patients sustained. That is a heck of a longer stay, though, in the long run. It puts huge strain on the medical system, and if it's unnecessary, why aren't they testing patients just to confirm the allergy before not administering?

If, according to the World Allergy Organization, "The diagnosis of drug allergy is based on a detailed history of the onset of symptoms/signs combined with a temporal relationship between the appearance of those symptoms and drug use/discontinuation. The clinical diagnosis is followed by carefully selected diagnostic tests depending on whether the reaction is IgE or non-IgE mediated," how are these being misdiagnosed? Good question, and one I cannot seem to find an appropriate answer to. Maybe it's not misdiagnosis so much as patient misinformation? Also strange.

When the test for a penicillin allergy is so simply (a skin test conducted by an allergist), why are we not finding out for certain whether patients are truly allergic? I'm certainly not one to jump onto the antibiotic train (I can't even remember the last time I had to take them, and neither of my kids has ever been prescribed one stronger than an eye drop), but as the oldest of the antibiotics, I think there's still value in using penicillin sometimes. Like, you know, syphilis.

This certainly has given me much to think about. I was diagnosed with a sulfonamide (or "sulfa") allergy as a child and wonder if that still stands.