No Longer An EpiPen Virgin

A suspected reaction sent me into a panic

My son was born with food allergies. He was sensitive even through breast milk. So many doctors claimed that was impossible—that he couldn't be reacting to foods I was eating—but his poor little face was such a red mess of eczema, and his tiny, brand new fingernails were constantly seeking out the itch and tearing his skin to shreds. I went with my gut and started eliminating foods to see if he improved, and he did. 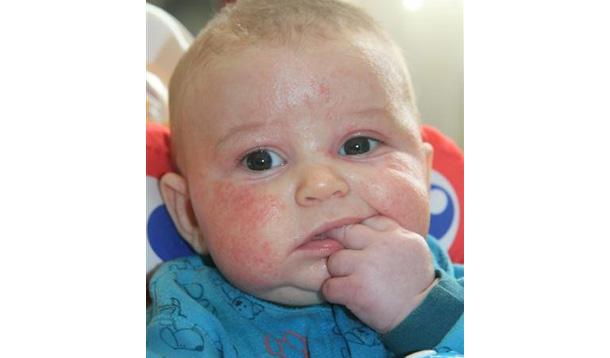 That photo above was taken on one of his better days. There is little documentation of the days when we were bundling his arms, keeping him from scratching the infected skin on his face. We tried every single scratch mitt on the market—each one softer than the last—but none were able to protect his poor skin.

By the time he was six months old and we were introducing solids, I'd already identified that he was reacting to a number of things (dairy being a major one), so we avoided cheeses and yogurt and continued introducing other food until, at seven months, the pediatric allergist confirmed a slew of other food allergies. That's when I made it my mission to learn everything I could about these food allergies that plagued my son.

At fourteen months, Mason reacted violently to Tilapia and was rushed to the hospital in an ambulance. By the time this photo was taken, the swelling had gone down considerably, and his breathing was okay, but I'm not sure mine was. I was terrified I was going to lose my little guy. 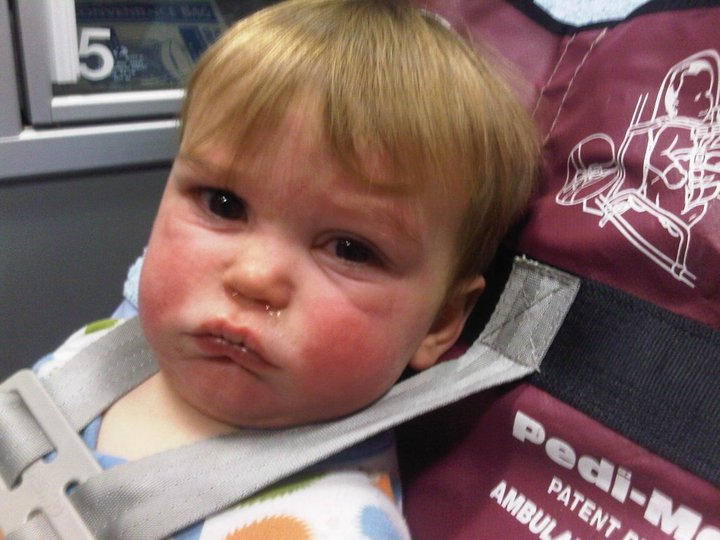 Ever since, we've packed an EpiPen, Benadryl, and puffers with us wherever we go. We're always on high alert for reactions, and visit our allergist every six months. Mason has since outgrown almost all his food allergies, but is still allergic to peanuts (and other nuts—we just avoid them all). We had never had to use his EpiPen, thankfully.

Last night, my husband left for the UK for a week, and we joked about how every single time he leaves, someone gets sick here. Either I or one of the kids ends up ill, and we joke about how it's always when he's away and unable to provide any relief. Mason has had a cold for a couple weeks, and Story is just getting over one, too, but otherwise things looked good for the coming week. We ordered sushi from our favourite place, kissed Daddy goodbye, and trundled off to bed.

About three hours later, Mason started to vomit. He was coughing, unable to catch his breath, and throwing up so violently it was shaking his whole body. On their own, these symptoms would never strike fear into my heart, but given his health history, I'm always more concerned about potential reactions. Delayed allergic reactions, though apparently rare, are possible, so I was watching him to be sure his breathing was okay. There were no hives, he was coherent, but he had an asthmatic-sounding cough. Then came the diarrhea, more vomiting and wheezing, and I started to get really worried.

I asked again, he wheezed out the response again. I went over all the things I've ever read in my head. Don't administer puffers if there's a risk that it's a food allergy reaction. Don't delay. Better to use the EpiPen than not. A million things swirling in my head, and me wondering if it really was a reaction or not. Is this a delayed reaction? Could there have been cross-contamination of the food? He was feeling totally fine before, is this just a stomach bug? What if it's not? What if he ate a fish he's never had before and is having a delayed reaction? Should I Google this? Call TeleHealth?

I made the call to grab his EpiPen and inject him, just in case. I was shaking with fear—having never had to use one before and being unsure whether it was really necessary, or whether Mason was okay. Had this happened to my daughter, I'd never have worried. I'd be confident it was just a gastro bug and we'd suit up for a night of pukes and move on. But, it wasn't her. It was Mason, who could easily and rapidly die from ingesting something he's allergic to.

I ran down the stairs and grabbed the EpiPen. I scooped up his body, held him on my lap, and calmly said, "Okay, buddy, we're gonna learn what this EpiPen's all about, okay? Mommy thinks you're just fine, but I need to be all the way sure. I need to make sure your breathing doesn't get worse, so we're going to give you your EpiPen."

I said I wasn't really sure, to be honest, that I thought it would be a quick poke, and that was it. I opened the protective case, slid the EpiPen out, removed the safety cap and SNAP it went into Mason's thigh.

I was disconnected. For a few seconds, I sat holding my phone in one hand, my other arm wrapped around my coughing son, and wondered how whacko I'd sound calling back to explain why I needed the ambulance when my son seemed just fine. Had I made the right call? Who knows. Should I call back?

When the paramedics arrived, they checked Mason out, listened to his lungs, and said they didn't think it seemed like an allergic reaction, but assured me I did the right thing by giving him the EpiPen and calling them. They were amazing. Of course, I felt sheepish and apologetic for having administered the thing when he didn't really need it, but they said to always, always err on the side of caution when food allergies are involved. They said it very easily could have been a reaction—just as easily as it could be a tummy bug—and told me I could take him to the emergency room or stay home, it was up to me. We decided to stay home, and they said over and over that if anything changed, and we felt he needed care, to call them and they'd come get him.

It was a very, very long night of puking, changing sheets, finding fresh towels, and honestly? I couldn't really be happier. I'm so relieved my little guy is okay, whether I overreacted on giving that EpiPen and calling 9-1-1 or not, at least now we know how the whole thing would go down. And now I'm no longer an EpiPen virgin, so there is that. I know exactly how it feels to panic and make the decision, to administer it to my little guy, and he knows, too.

I'm off to snuggle him and never let go. (Well, maybe just to wash the mountains of laundry I have to do from him barfing everywhere.)

For step-by-step instructions on how to use your EpiPen, click here.