Or: Hey Mom, Their Allergies Are Your Fault 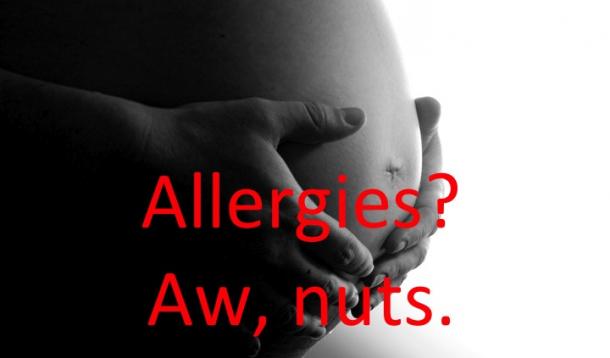 So did you read about the latest peanut allergy study? It tells us that if only we had eaten more nuts during pregnancy, our kids would be less likely to have peanut allergies. One-third less likely, as a matter of fact. That's quite a benefit to eating nuts, isn't it? Especially when we've been told for many years to avoid them while pregnant, right?

It seems to me that pregnancy/parenting advice changes more than the weather, and we all do our best to keep our kids (both in and out of the womb) as safe as possible, but you know what? This study can go straight to hell. It feels like a giant pointed finger shoved in the faces of the women carrying babies, and I'm not willing to take on the blame for my child's food allergies, thankyouverymuch. If only you hadn't eaten that! If only you had done this. Oh, wait, that was wrong, and you're still to blame! Too bad, Mama, it's all your fault.

Eight years ago when I was pregnant with my daughter, the recommendation was to avoid nuts while pregnant, for fear of affecting the baby in utero. Studies had shown that there was an increase in nut allergies in children when pregnant women ate them. I ate them anyhow. I love peanut butter, and wasn't about to give it up just because some inconclusive study said so. I also ate sushi, soft cheese and caffeine. When my son was in utero, I did the same.

One child has exactly no allergies, and the other has had too many to recollect over his short four-year life. So does this new study mean that had I not eaten nuts, my son's allergies could have been even worse? Or was it my nut-eating that caused these allergies?

Or maybe, just maybe, is this something that I couldn't control, and that we still really don't know enough about? I'm placing my bets on the latter. Studies like these need to shut their damn mouths with the blamey-blame, that's what I think. I agree that the rapid increase of food allergies is alarming, and I think that the cure is in identifying the cause, but I really think it's detrimental to start placing blame on pregnant women when we're not truly sure that's where blame should be cast.