(unless you want to sound dumb) 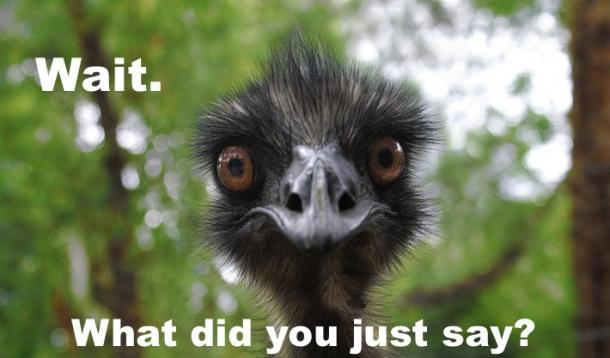 Not everyone knows about allergies, much to the dismay of those who suffer from them. I asked around on social media, and I've collected some of the whackiest/most annoying/dumbest things people have said to those who have allergies.

Have you heard any of these? If you've said them, don't admit it. Just don't say them again, deal?

There's no such thing as a hypo-allergenic dog. It doesn't matter if your dog has hair (as opposed to fur), if it's bathed daily, or if it's one of those freaky-looking bald ones. Human allergies to dogs are generally related to the dander or saliva—two things every single dog has. There are no absolute guarantees that a dog won't cause someone a reaction. Example: My husband and son are allergic to dogs, and we have a Yorkie/Maltese cross. She doesn't affect either of them, until she licks my son's face. Then? Hives form. So yes, he's allergic to this "hypo-allergenic" dog. (Obviously we don't let her lick him.) Don't take offense, ok? Not everyone has to snuggle your puppy.

9. Do you have to use your EpiPen often?

EpiPens (or other epinephrine injectors) aren't like Advil. You don't just use them willy-nilly whenever you sneeze. They're used when a serious reaction (anaphylaxis) is a possibility. And when you use one, you have to head off to the good old emergency room for observation, too. They're also $100 a pop (literally, the needle "pops" when you use them), so they're definitely not something most people use with abandon. They're used for emergencies only, indicating exactly how severe a reaction can be. Most people avoid their own life-threatening allergies so I sure hope they're not popping EpiPens weekly.

8. Can she just have a little bit of peanut butter?

Some allergies are so sensitive that exposure to particulate matter (peanut dust, even) causes anaphylaxis. No amount of an allergen is safe. So no, you can't feed my kid just a little tiny piece of your peanut butter toast.

7. Can't you just give her some Benadryl?

Over-the-counter allergy medications are wonderful things, but no, in the case of a severe reaction, they wouldn't be able to help. And let's face it, they barely touch severe seasonal allergies, as most sufferers know come springtime.

6. Maybe if you'd let him play in the dirt more, he wouldn't have allergies.

There are plenty of studies out there that point to the Western world's obsession with cleanliness as a potential cause for the rise of allergies, but I can assure you, we play in the mud a-plenty and I'm no germaphobe. My son was born with severe allergies, and it wasn't because my house is too clean, that's for damn sure.

5. Eat more of your allergen—it will cure the allergy! (@sandierpastures, via Twitter)

So, you want someone who can die from a peanut to eat more peanuts? Can someone trace the logic here for me?

4. I know you're anaphylactic, but you don't have to be so upset about nuts being in the room! (@dezignated, via Twitter)

Cross-contamination, inhalation, accidental ingestion—these are real fears for people with allergies. So yes, when an allergen is present, the allergic person should not be.

Lactose intolerance is the inability to digest lactase (a type of sugar found in milk). To combat the gas and discomfort related to this, people can pop a few over-the-counter Lactaid pills and carry on loving ice cream. A dairy allergy is a severe reaction to the proteins in dairy, and it can be life-threatening. So not the same.

2. What did you do to cause your child's allergy? (Liz B. via Facebook)

Since nobody really knows what happens to a person's immune system that flips the switch for allergies, how about we leave the blame out of the equation? I carried two pregnancies the same way: ate the same foods, lived in the same place, created them with the same DNA combo. My first baby has no allergies and the second was born with so many, there was almost nothing safe for him. I have no idea what series of combinations made his little immune system go haywire, but I can tell you that this isn't a "fault" situation. It's completely ridiculous to blame a mom for causing allergies.

1. It's all in your mind. (@interabanger, via Twitter, Cindy B. via Facebook, and many, many other people, sadly)

I know, I know, plenty of people use the word "allergy" incorrectly. And heck, some abuse it by claiming they're allergic to something when the reality is that they just don't like eating it. But at the end of the day, if someone tells you they have to avoid something, is it really worth arguing? If they have an itchy tongue after eating kiwi, why tell them it's their imagination? If they sneeze whenever they pet the dog, why disagree?

Category:
Health - Wellness
Tags:
allergies
what not to say
10 things
dumb
things not to say to someone wih allergies
Alexandria Durrell