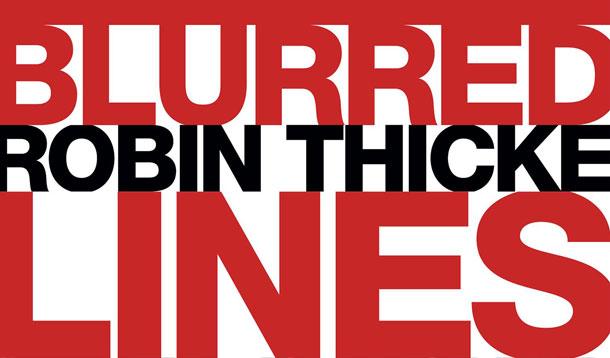 Oh Mommy, This is so nice! 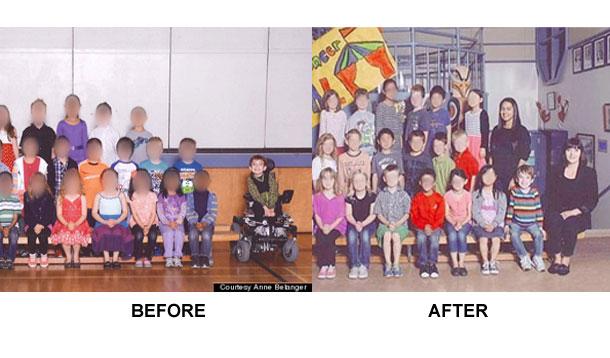 Parents of wheelchair-bound second grader Miles Ambridge finally have something to rejoice about. Legions of hearts sank upon seeing the school photo that showed Miles set off to the side of his classmates. It was a shot so disjointed, you might have imagined seeing thirty years ago but sadly not in this century. Much like this other recent, much publicized disability faux pas.

Following complaints from the boy's parents, the school set up a retake and according to his mom, Anne Belanger, the 'do-over' is as it should be: "gorgeous," showing her son perfectly assimilated with his peers.

“I couldn’t comprehend how the photographer could look through the lens and think that [the original picture] was good composition. ... [T]his just boggled the mind,” said Belanger. “Being picked on and being set aside is horrendous and this was what was happening."

According to an article in the Huffington Post, seven-year-old Miles has spinal muscular atrophy, a genetic condition which weakens his muscles and requires the boy to use a wheelchair.

Although some feel he should not have been taken out of his chair for the new photo, his parents applauded the second effort. Fortunately his parents had the sense and sensitivity not to show their son the original photograph, so he is also blithely unaware of the controversy it sparked.

“Oh, mommy! This is so nice," he said of the new and revised photo. And the world is as it should be.

What do you think of the new photo?

Rocking the Converse and Low-Rise Jeans 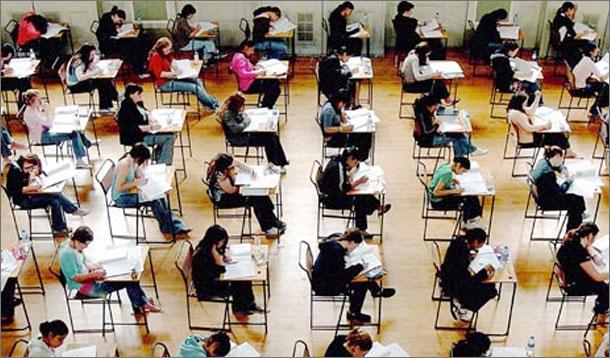 A French mother has brought helicoptering to new heights after being caught sitting an exam in her 19-year-old daughter's place. According to an article in the Huffington Post, the 52-year-old woman donned Converse sneakers, low-rise jeans, and heavy makeup in order to sit the baccalaureate exam.

And apparently since people of any age can take the final high school exam known as "le bac," the mom might have got away with impersonating her daughter, if she hadn't been sitting another exam at the same time.

The supervisor took notice, and police were contacted two hours into the exam, wherein the mother was discretely removed from the test room.

Although the mom admitted to cheating in order to boost her daughter's results on an English component of the testing, her actions have surely backfired.

Not only has she been charged with fraud, but her teenage daughter may be banned from sitting "any official exam for up to five years." Ouch.

Should the teen be punished for her mother's drastic actions, or should she simply fly far from the coop and study in another city—or, better yet, another country?

See the radical measure this mom took in order to watch over her daughter at school.