#DontJudgeChallenge Gets Beauty All Wrong

#DontJudgeChallenge Gets Beauty All Wrong 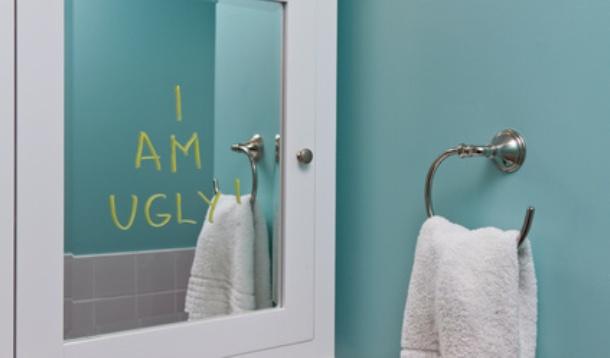 Teens love a challenge in the name of social media. Though well-intentioned, some experiments - like the #DontJudgeChallenge - miss the mark.

In the videos, users film themselves "disguised" as "ugly:" with acne, thick eyebrows, or bad teeth. In the next frame, the ugly duckling magically reveals itself to be a good-looking swan. See, don't judge me. I was beautiful all along...

So much for acceptance. These videos simply serve to reinforce existing beauty standards and ridicule those who genuinely possess perceived "ugly" traits (that can't be wiped off with a cloth).

As it turns out, #DontJudgeChallenge is merely an exercise in vanity and preening for the already beautiful.

True empowerment comes from the likes of America's Top Model Tyra Banks posting "naked" selfies, without a spot of makeup or camera filters.

You only need look at Em Ford to see just how far we have to go as a society to shed our shallowness. The popular 'My Pale Skin' makeup vlogger recently shared a video entitled “You look disgusting” in which she revealed what happened when she took off her makeup.

Before: beautiful. After: hideous.

When will we learn that beauty doesn't come in a jar? But ugly can - and does - come in a tweet.

Why Are People Getting Tattoos of Semicolons?

Punctuation's got nothing to do with it

Why Are People Getting Tattoos of Semicolons? 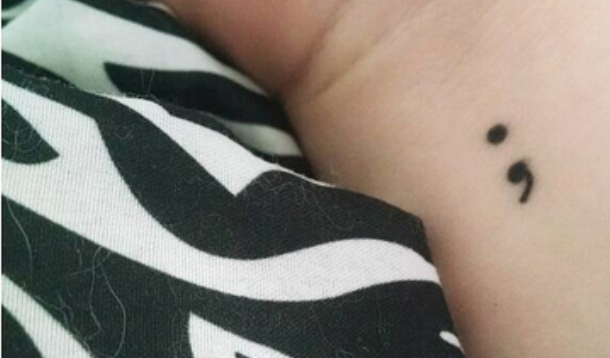 Though the idea of getting a semicolon tattooed on your wrist may appeal to grammar nuts out there, the reason many people are doing it has absolutely nothing to do with punctuation.

Arguably the most misused punctuation mark, the semicolon's function is to link two sentences while keeping them distinct. Yet thanks to a social media campaign, it's become so much more.

This past April, Project Semicolon appropriated the semicolon as a symbol of hope and mental health awareness.

"A semicolon represents a sentence that the author could have ended, but chose not to," says the Project website. "That author is you and the sentence is your life."

The Project encouraged those who have been affected by depression, anxiety, as well as those who have self-harmed or tried to commit suicide, to ink the semicolon on to their wrists.  If you check the stats, that's an awful lot of people. (In 2013 alone, every 12 or so minutes someone committed suicide.)

That's around the time that Colleen Duffy got her own semicolon. The 24-year-old grad student from Pennsylvania lost a friend in high school, and experienced her own period of depression and anxiety. The tattoo fit, so to speak.

Two years on, Duffy has no regrets because every time someone asks about her semicolon is an opportunity to talk openly and frankly about the suffering that so often goes on behind closed doors.

No disrespect to all the cute butterflies and flowers out there, yet looking down at your wrist and having that indelible reminder of what you went through - and the fact that every day you're consciously choosing to continue your 'sentence' - is a powerful and subtle symbol. One that is vital for people for whom mental health is an ongoing struggle.

Breaking up is hard to do... Forreal 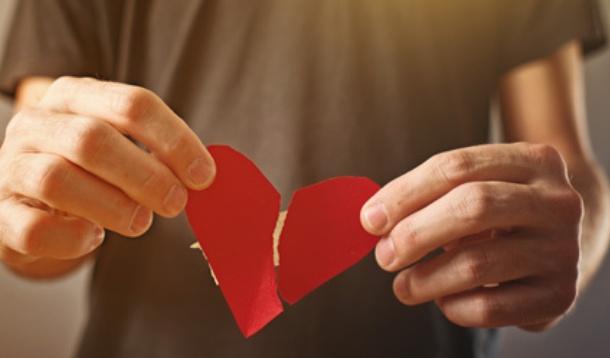 Ah, the tween life! Full of drama and hardship. And the relationships... don't even go there. An 11-year-old's epic break up text was leaked in screen shots taken by her older sister (her mother since confirmed they are legit). And you just know it's gold.

The young Juliet - Madi - opens a series of texts to her current Romeo - Joey - with the killer "We need to talk" line. Poor guy doesn't know what's about to him him. All he did, after all, was hang at the park with a girl named Natalie...

But it was a deal breaker for poor Madi, who was pissed after giving him two chances already.

"Why would you cheat on me, Joey?" she asks, before condemning him to middle school alienation. Then she drops the "I didn't even love you" bomb. Bam! Run, Joey, run!

But no. Joey hits back, with undeniable proof that Madi did, in fact, love him in the fleeting time they were an item. 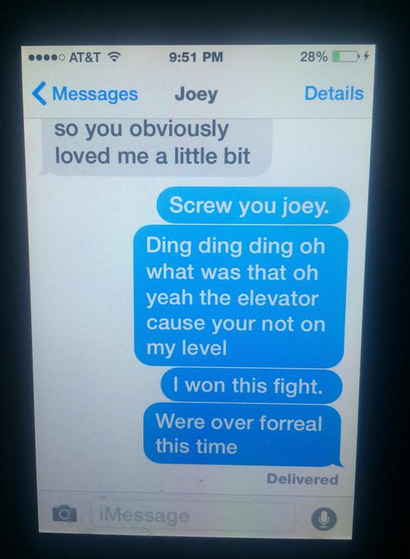 Ding ding. The closing line is a clincher. You may want to mentally file that one the next time you and your significant other get into a heated argument. This girl fights with the gloves off. Shudder to think what will happen once Madi hits high school.